Protesters at Sen. Gardner's downtown Denver office were removed after two days of a sit-in protest. They said they wanted the Republican Senator to vote 'no' on the ACA replacement. His office had them removed Thursday. 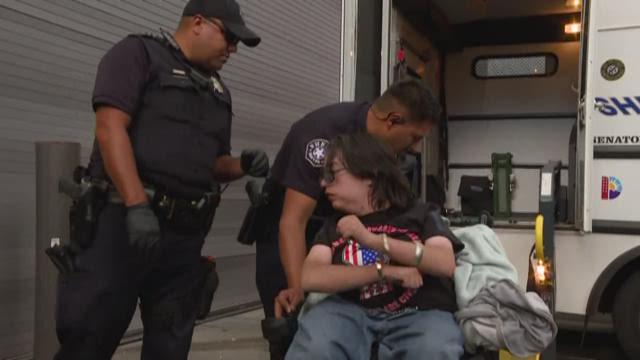 Ten protesters were arrested Thursday night after staging a sit-in for over 57 hours at Sen. Cory Gardner's (R-Colorado) Denver office in an attempt, they say, to get him to vote against the Better Care and Reconciliation Act - the Republican replacement for the Affordable Care Act.

The protesters first arrived Tuesday morning and have been there since. Thursday night, Denver Police arrested and removed the protesters from Gardner's office at the request of someone from his office out of necessity.

Casey Contres, a spokesperson for the senator, says they signed the complaint because they had no choice. Building security reportedly notified them that they were in violation of their lease by allowing the protesters to stay.

Reasons for the violation include allowing the protesters to stay overnight and unsafe/unsanitary conditions.

They first went to Gardner's office on 17th Street despite the announcement the bill wouldn't be voted on that day to demand he vote 'no' on the legislation when it inevitably gets to the Senate floor.

According to a report from the Congressional Budget Office, 22 million Americans would lose health care coverage by 2026 if the bill were to be passed and signed by President Donald Trump.

The bill itself has come under fire from all sides of the political spectrum - with Democrats calling it cruel and many on the Republican side either saying it goes too far in the cuts that it makes or not far enough.

While the bill is in trouble, several members of ADAPT, a disability advocacy group, staged the sit-in to save their Medicaid coverage, they say.

Carrie Ann Lucas, a member of the organization that's been continuously live-streaming the sit-in on Facebook, posted that Gardner and the Republicans would sacrifice Coloradan's health care to "give a tax break to the wealthy."

As of 6:45 p.m., police asked the protesters to leave the building. They began chanting they'd rather go to jail than to die without Medicaid.

The live stream showed the protesters unwilling to leave but remaining peaceful toward the officers. Denver Police also appeared to keep their cool despite loud chanting and remained amicable to the protesters as they removed them.

9NEWS reached out to Denver Police, who say they asked the entire group to leave and those who refused were arrested. Ambulances were standing by in case they were needed. They could not say what charges the protesters might face.

ADAPT has met with Gardner's office earlier this year.