Results from DUI breathalyzers over 18 months could be called into question because of a judge's decision in a Gilpin County DUI case. 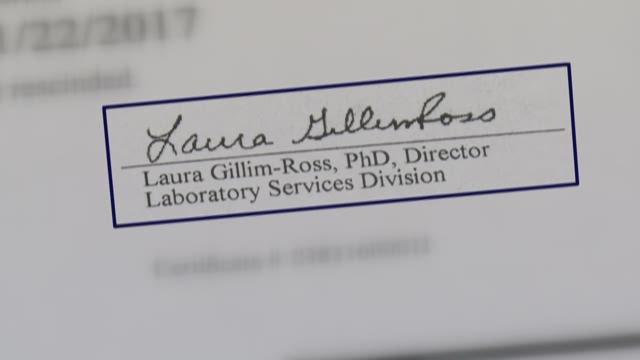 Results from DUI breathalyzers over 18 months could be called into question because of a judge's decision in a Gilpin County DUI case.

Robert Friedlander is fighting his breathalyzer results. His attorney, Danny Luneau, has put the state's breathalyzers on trial by showing evidence they were certified using the name and signature of a state employee who did not work for the state at the time the machines were certified.

The Colorado Department of Public Health and Environment oversees the state's breathalyzer program.

RELATED: Colorado's entire breathalyzer program is on trial because of one DUI case

The breathalyzer that determined Friedlander's blood alcohol content was certified from March 17, 2016 to March 17, 2017, but the certificate included the name and signature of Dr. Laura Gillim-Ross, who left the health department in July 2015.

On Monday afternoon, Gilpin County Judge David Taylor ruled that the certificate attesting to the breathalyzer's proper function is not admissible in Friedlander's case.

Gillim-Ross' name and signature appeared on breathalyzer certificates, that verified the machine was in working order, for 18 months after she stopped working at the health department.

According to Taylor's ruling, the health department knew her name continued to appear on the certificates.

Jeff Groff, program director at the health department for the state's breathalyzer program, testified in court as to why a former employee's name still appeared on the certificate.

DUI attorneys across the state have attended hearings in this DUI case, to see how the judge would rule on this issue. Blood alcohol content levels determined by breathalyzers that were certified with her name on a certificate after he departure from the health department could be called into question.

"This Instrument Certificate is, at best, misleading. It contains the signature of a person that did not approve it," wrote Judge Taylor. "CDPHE's decisions have created evidence that is not accurate. No one disputes this inaccuracy. Although CDPHE did not have any evil intent, this inaccuracy is nevertheless a predictable result of CDPHE's purposeful conduct. Due process cannot survive if false evidence resulting from intentional government conduct is admitted in an effort to deprive a person of freedom."

Judge Taylor is giving the state the opportunity to prove that this breathalyzer in Gilpin County was still accurately certified.

"If the People can show that the I-9000 (breathalyzer) was properly function through other means, its results may be admissible," wrote Judge Taylor. "It would be folly to exclude the results of a properly functioning machine, just because of a signature."

The health department took one final swipe in the judge's conclusion.

"This situation is the exclusive result of CDPHE's decision to consciously disregard truth and accuracy in an official document, in favor of economizing on software updates to the I-9000. While not intentionally seeking to mislead, CDPHE's knowing failure to take immediate steps to remove and update the signature on this Instrument Certificate has created evidence that is misleading, and that is something other than the truth. Such evidence, even though not the result of bad faith, cannot be allowed, nor can such poor decision-making y the State be condoned," wrote Taylor.

"If a person is to stand convicted, that conviction will rest upon the commitment of the Government, in its entirety, to absolute truth and honesty -- and thus to integrity. While mistakes in this process can and do happen, we as a society must do all that we can to limit both their occurrence and their impact."