The rally's organizers say a man with a knife hindered their cleanup efforts. 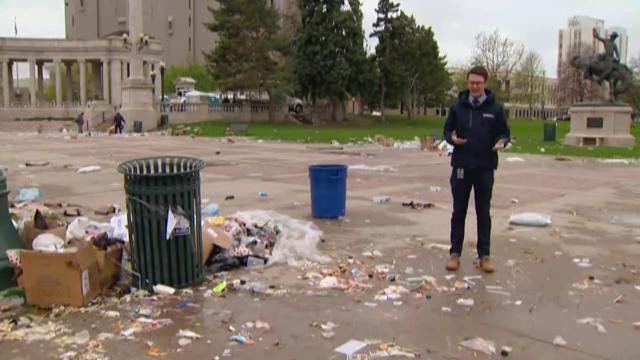 Multiple 9NEWS viewers reached out to us Friday morning with an observation: There was lots of trash in Civic Center Park after thousands of people gathered there for the 4/20 rally Thursday afternoon.

Lopez says when that man was asked to leave, that person allegedly pulled a knife on cleanup crews. Denver Police said they responded to an incident at around 2 a.m. about people throwing trash into the park, but couldn't confirm they took a report about the suspect with a knife.

One of the producers for the rally said crews picked up between 80 to 120 bags of trash, but that the person cut them open and scattered him.

Lopez says there’s been trash issues with the 4/20 rally in the past – and that’s why the rally has a permit at Civic Center Park until noon to clean up.

He says another Dumpster truck was hired for Friday morning, and a power wash cleanup crew is expected to arrive at 10 a.m.

9NEWS reached out to the Denver Parks and Recreation department for additional information about the cleanup. We will update this story when we learn more.