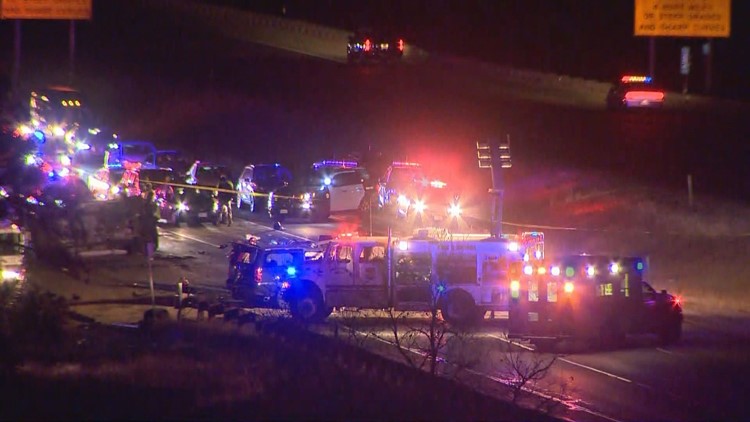 Photo by: KUSA
Two people died after a multi-vehicle wreck on Interstate 70 in Jefferson County near Genesee on Christmas Eve, according to the Colorado State Patrol.

A 6-year-old girl who was hospitalized with severe injuries following a multi-vehicle wreck on Christmas Eve has been moved out of the intensive care unit, according to a Caring Bridge profile sharing updates on her progress.

Sancy Shaw and her 6-year-old daughter Charlee were driving on Interstate 70 near Genesee when a pickup driven by 62-year-old Cheri Goodard lost control, crossed over the median and struck the Suburban they were traveling in, according to Colorado State Patrol.

CSP said alcohol and marijuana may have contributed to Goodard losing control.

RELATED: 9 people have died on Colorado highways since Christmas Eve

“Charlee’s MRI yesterday looked good enough that she was moved from ICU to the surgical floor at Children’s Hospital,” a post on Jan. 1 said.

The post continued: "The other big event was removal of her C collar (neck brace). Last night was the first night she has been able to sleep without her collar.  We can imagine it must have made her much more comfortable."

The team at Children's is continuing to monitor Charlee's neuro-activity along with finding the best combinations of medications to control her pain, the post said.

"As friends and family begin to return home after the holidays, we ask you to remember Charlee in your prayers," the post read. "Her journey of many steps is just beginning, but with God’s help, she will continue to heal."