A coalition of local disability-rights advocacy groups filed a class action lawsuit on behalf of six disabled Coloradoans, alleging the city of Denver is discriminating against them. The suit filed Thursday in Colorado’s U.S. District Court alleges the city is denying people who use wheel chairs meaningful access to the state’s favorite concert venue- Red Rocks. 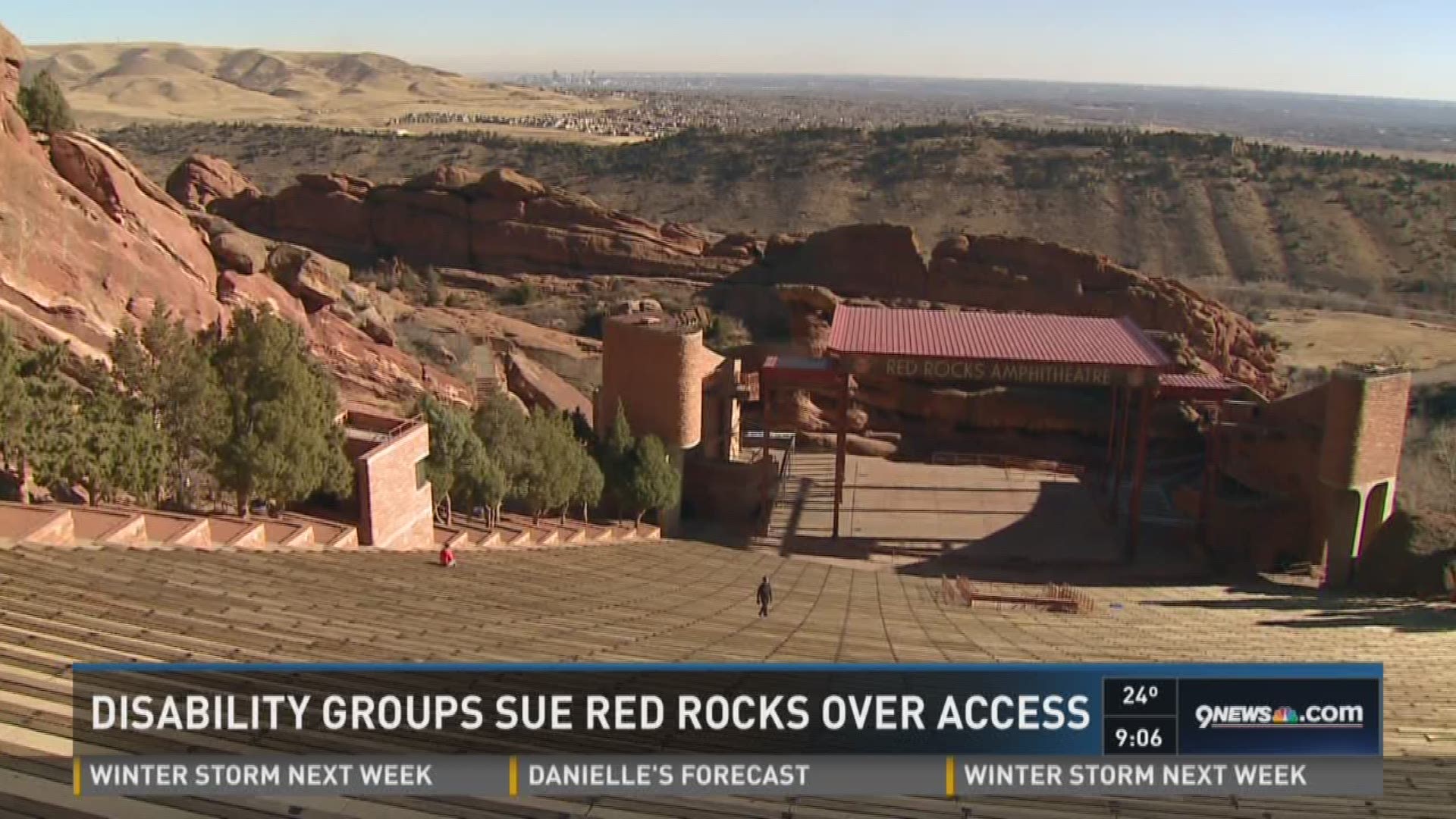 DENVER- A coalition of local disability-rights advocacy groups filed a class action lawsuit on behalf of six disabled Coloradoans, alleging the city of Denver is discriminating against them.

Plaintiffs in the suit allege they don’t have “meaningful access” because the ticketing and seating policies “make it very difficult for such patrons to purchase tickets in the approximately one-half of the accessible seats located at the front of the amphitheater.”

Frank Mango is one of the plaintiffs. He’s been coming to Red Rocks for 30 years, but accessibility didn’t become an issue for him until three years ago, when he fell in a home-improvement accident. He’s now in a wheelchair.

“It’s just frustrating, cause I’m a big, huge, monster concert fan and I’ve always been even before my accident,” Mango said. “Now being in a wheelchair, a lot of my passions are out of my reach. That’s the least I can do [go to concerts], one of the easy things I can do now. It should be fairly easy. It’s just frustrating that it’s almost impossible to get front row here.”

Red Rocks’ unique structure only allows for two wheelchair accessible rows, one in the front, Row 1 and one in the very back, Row 70.

Mango doesn’t like sitting all the way in the back, and Row 1, he said, is almost always sold out for face value, but available at inflated prices on third party sites.

When buying the front row ticket, one site warns you’re buying accessible seating. But that apparently hasn’t stopped people, at least not in the experience of Mango and the other plaintiffs.

“I know that’s a lot of people coming in fraudulently, buying the front row seats,” he said. “That’s one of the biggest concerns, as they have no morals or no ethics. I can go in and press this button, they’re going to let me buy the ticket, when I get to Red Rocks, they’re not going to question me whether or not I need those seats or not for disability.”

“The city is allowed to ask them if they have a disability that requires them to be in those seats,” said Alison Butler Daniels, director of legal services at Disability Law Colorado. “They can’t further inquire about their disability, but they can ask that simple question. And if the answer is no, then they can be re-seated to one of the other 9,000 plus seats within Red Rocks and people who actually needs those seats can be reseated to those accessible seats.”

In their suit, Disability Law Colorado, Civil Rights Education and Enforcement Center and the Colorado Cross-Disability Coalition say Red Rocks and the city could, should and must do more. That’s why they sued.

“We brought this to their attention,” Butler Daniels said. “But they failed to commit to making these changes and because of that, we believe they’re in violation of the law.”

“We’re asking them to make the necessary changes so that people who use wheelchairs can enjoy this amazing Colorado treasure,” she said.

The plaintiffs want the city to do a number of things, including clearly marking the accessible rows, similar to the way parking spaces are marked. They want further disclosure on the tickets purchased by the patrons and they want Red Rocks to allow disabled customers to exchange a ticket in another row for Row 1, if accessible seating is available. This would require staff asking people about their disability needs and moving them, which is allowed by Federal ADA guidelines, Butler Daniels said.

“We think a lot of self-policing would happen if everybody understood that was in fact the accessible section,” she added.

The city said it does what it can to provide access for people with disabilities, including those with hearing and vision impairments.

“What the real problem is that people knowingly buy those tickets knowing that they are for accessible patrons,” said Brian Kitts, spokesperson for Red Rocks.

He said starting with the 2017 season, the tickets will be more clearly marked.

Kitts provided specific language that will be printed on the assessable tickets starting in 2017:

Kitts said the city has had a pop-up disclaimer about the accessible seating since 2015 for all its venues.

Kitts told 9Wants To Know the city would be willing to mark the accessible rows.

“That’s something that’s easy to do,” he said. “We can mark Row 1 and Row 70 as accessible seating. If that helps then, sure we’re happy to do that. In my gut, I’m not sure that marking those as handicapped seats does anything except change the semantics.”

The other issue brought up in the suit, is the access to the shuttle available for guests with disabilities or who are mobility impaired. On its website, Red Rocks said the shuttle is for guests with disabilities or mobility impairments that “possess tickets for the front section of the amphitheater.” The site also says, “Guests who require the use of a wheelchair will be asked to present a Row 1 ticket to gain access to the shuttle.”

The suit says, “this policy makes it almost impossible for Red Rocks to reseat patrons who use wheelchairs who have purchased tickets to inaccessible seats in the lower part of the amphitheater.”

Kitts told 9Wants To Know, the city has had a “longstanding practice of allowing any ticketed patron ….to get on the shuttle.”

Kitts said the line about presenting the Row 1 ticket “may have been confusing,” but no one has been denied access to the shuttle. Kitts said the city was changing that line to avoid confusion.

Kitts added the city continued to meet with advocacy groups and hoped to have some new options for the community soon.

Kitts stressed the way to solve this issue, is through new federal legislation that could change the current loose laws.

The issue is now in the hands of a federal judge, who could decide if the city is doing its best or not enough.

The suit filed against Denver Thursday is one of two before U.S. District Court. In the second case, the plaintiff, among other things, also complains about being able to purchase accessible seating.

Director of the Office of Disability Rights for the City and County of Denver, Aisha Rousseau, was not aware of the six-plaintiff lawsuit early Thursday afternoon, during a phone call with 9Wants To Know.

She did say the office has been working with Red Rocks staff and management to make sure city services are equitable for people with disabilities, including facilitating listening sessions and relaying concerns from the disability community.