While Mayor Coffman explained that he believes the move would be a step forward for Aurora, those who oppose the ban say otherwise. 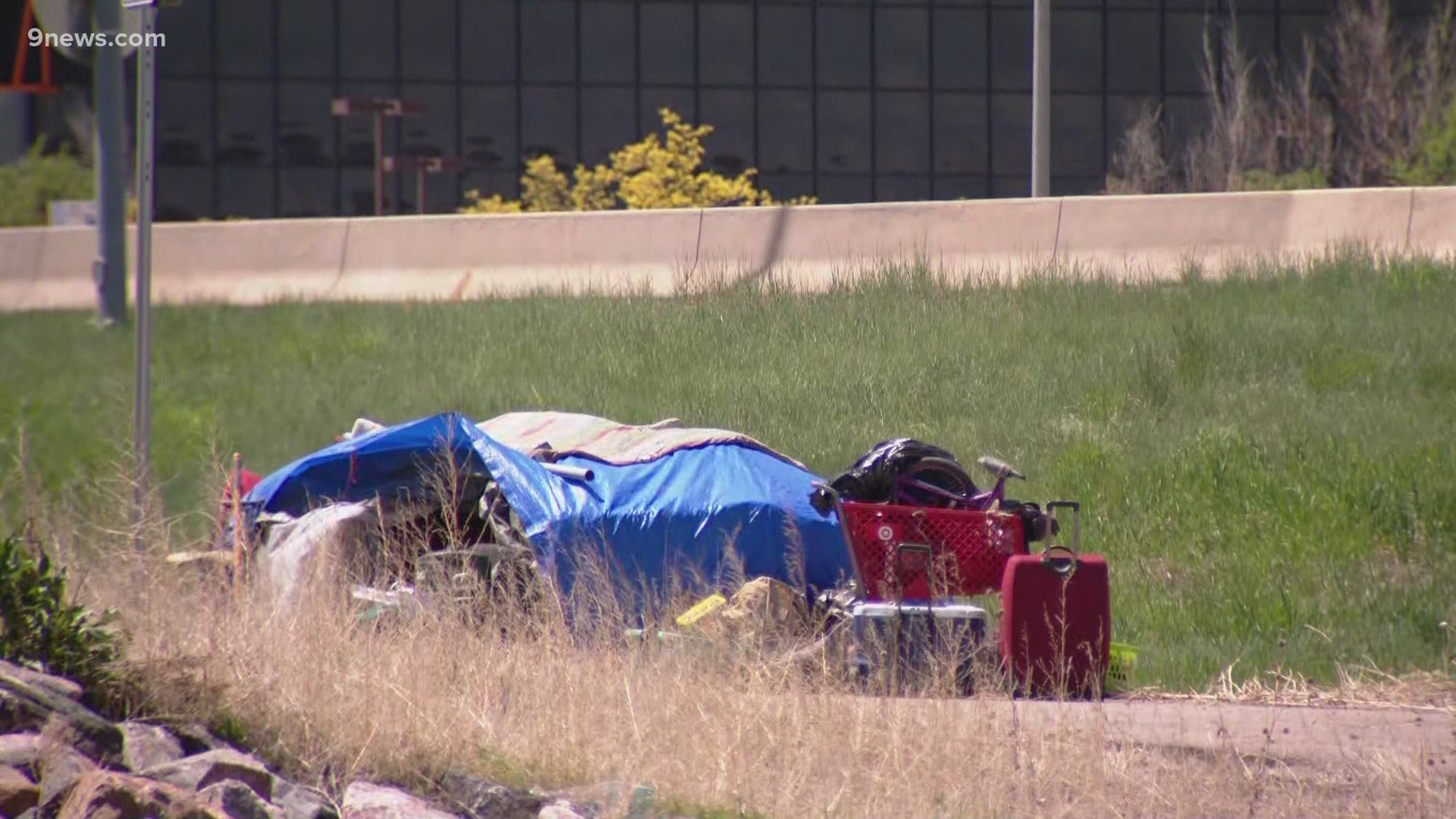 AURORA, Colo — The anticipated proposed camping ban in Aurora was laid out by Mayor Mike Coffman on Thursday.

The ban itself will still have to pass through several committees before it has a chance to make it to the city council for consideration, which Coffman is hopeful will happen by the end of next month.

“I think it’s very important for the city of Aurora to take this step," he said to 9NEWS on Thursday. "...to take this step in terms of giving these individuals who are experiencing homelessness an alternative place to go to within the city of Aurora that is safe, that has sanitary conditions. But the trash, these unsanitary conditions of these encampments that are springing up all over our city, have got to stop.”

He added there are several goals with this proposal, which include getting those experiencing homelessness in alternative shelter options and improving public health and safety.

According to the city, in 2020, the Point-in-Time Count (PIT) showed an increase of people experiencing homelessness in Aurora, which came out to more than 400.

"I mean, you're never going to have a 100% solution. I mean, you always have these encampments pop up," Coffman said. "But I think having it established in law is important as well as having a place for them to go."

RELATED: Camping ban to be proposed in Aurora

Coffman posted the text of the proposed ban to several social media pages, including his Facebook and Twitter.

According to the text of the proposal, if approved, it would be "unlawful for any person to camp on private property without the express written consent of the property owner or the owner's agent..." and "...for any person to camp on any public property, except in any location where camping has been expressly authorized by the department having control, management, and supervision of the public property."

As for enforcement, the text reads that an officer can't issue a citation, make an arrest or enforce the ban unless "...city staff or a law enforcement official have issued a person in a camp a verbal or written order to move from the camp and take their property with them..." and the person ordered to move was offered placement in a shelter.

If the person refuses or fails to leave the camp property, the rule could be enforced.

The text also explains that "any person convicted of violating this section shall be subject to the penalty provisions as provided in section 1-13 of the City Code."

Under that code, it includes penalties like a fine of up to $2,650, or up to one year of jail time.

However, city spokesperson Michael Brannen explained to 9NEWS that the city attorney’s office says the $2,650 fine or year imprisonment would be the maximum penalty, and that it is very unlikely that such a penalty would be imposed.

"The court would be much more likely to utilize programs, resources, and mental health and drug initiatives to aid individuals. An individual's inability to pay a fine if one was imposed would not result in jail," Brannen explained over email.

Coffman added that the goal is to not penalize people.

"The objective is to get them moved to a designated facility that is safe, that is sanitary..." he said, in part.

Part of this process also includes potentially working on designating an area, or areas, for those experiencing homelessness to camp.

Additionally, the City of Aurora is currently seeking community feedback on its "safe outdoor spaces" to address homelessness.

The sheltering options currently being shown include pallet shelters, tiny homes and safe parking lot examples with a shower, restroom trailer and more.

You can submit feedback here.

Pushback from some local leaders

While Coffman believes the move would be a step forward for Aurora, those who oppose the ban say otherwise.

"First impression is that it does basically two things. The first is it codifies the existing policies that we have in place for abating camps," said Juan Marcano, an Aurora City Council member, on Thursday. "And codifying some of those policies, I think is actually very harmful because those policies need to be flexible, because the scenario, you know, around these camps and the specific situations may change. So the departments need flexibility as opposed to being basically forced by law to always do things in a very specific way."

RELATED: What happens if you give people experiencing homelessness a basic income?

Marcano added that he believes another harmful impact of the ban is the penalty that those who are experiencing homelessness may be subjected to.

"That's just kicking people while they're at their lowest point in their life," he said. "...And as policymakers, we need to be following evidence and best practices as opposed to just, you know, having knee jerk reactions or frankly, putting together harmful public policy that's actually going to end up costing the city money over time and not address the root causes of the issue."

John Parvensky, the chief executive officer of the Colorado Coalition for the Homeless, explained that he believes the proposal is an attempt to implement a "failed" and "flawed" policy.

"...by creating a camping ban and enforcing that against people who really have no other choice but to sleep in places because they don't have access to the quality shelter that they need and they don't have access to the affordable housing that they need to end their homelessness. So it's a bad policy. And unfortunately, it's, it's not very well thought out," he said, in part.

He adds that he feels there should be more of an investment in infrastructure and emergency shelters.

"And only when those pieces are in place will you see the number of people who are sleeping on the streets go down," he said, adding that he feels the ban is counterproductive. "And it doesn't really lift the spirits and the morale of the community. It really creates divisions that are very difficult to put back together. The solution to homelessness is adequate supportive housing for those who have ongoing needs, an adequate emergency shelter."

An issue with a past throughout the Denver Metro

In January, it was reported that Coffman spent a week living on the streets of Denver and Aurora where he posed as a person experiencing homelessness, which garnered criticism from some local leaders, calling it a "publicity stunt."

Coffman in January said he was suspending a move toward a camping ban in Aurora until he was better able to understand the impact of such a ban.

When asked Thursday if the experience in late December played a factor in developing the proposed ban, Coffman responded in part, "Well, probably it will play more of a factor in terms of what the follow on is. It will play more of a factor of what the alternative looks like in terms of - that I believe that certainly, we have to provide emergency shelter, I think, for everybody in need. But there is an element that [someone who] suffers from mental illness that will never be able to support themselves. And we have to consider that. And I certainly saw that during the week."

In Denver, there has been some back and forth in recent months for enforcing a camping ordinance.

In January, The Denver Police Department resumed enforcing the city’s ban on urban camping. The ban itself has faced several legal challenges. 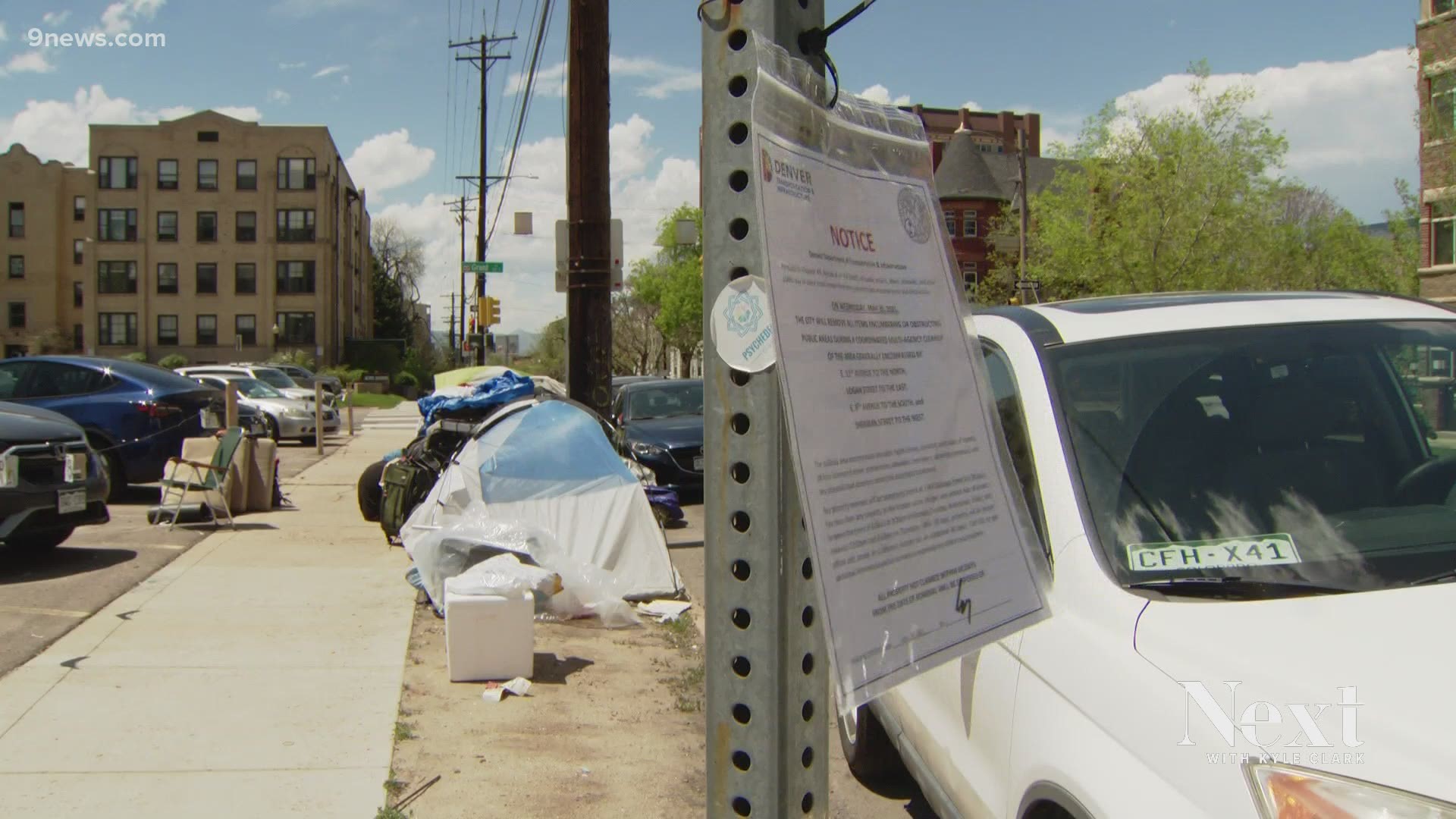 Even when it happens, it is a snapshot of one day of the year. The statistics for that one day in Denver showed 996 unsheltered people in the city in 2020 and 554 unsheltered in 2019.

Denver Police provided Next with Kyle Clark statistics from June 2012 to April 2019. In total, 33 camping ban citations have been issued.

Compare that to Boulder, which also has a camping ban.

In 2020, there were 118 unsheltered in Boulder, and Boulder Police issued 255 camping ban violations.

A Boulder city spokeswoman said that the 255 violations in 2020 were down "due to the officer directives to limit close interactions with individuals suspected of misdemeanors to prevent COVID-19 exposure and spread."

Centennial's camping ban is on city-owned property. The Arapahoe County Sheriff's Office, which does law enforcement for Centennial, has issued two citations in 2020 and one in 2021.