Over the past few years a couple of these large homes in southeast Aurora have become the site of illegal marijuana grows. 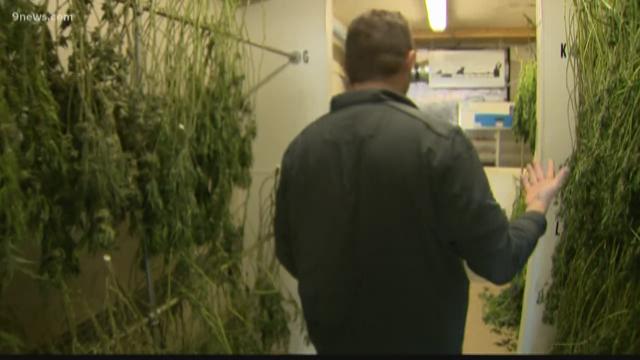 It’s a neighborhood of expensive homes, golf course views and kids playing catch in cul-de-sacs. But over the past few years a couple of these large homes in southeast Aurora have become the site of illegal marijuana grows.

“We are trying to get together as a community, work with the powers that be and get a private security service,” said neighbor Jim Weeks. “It looks like a house but it’s a criminal enterprise manufacturing facility disguised as a house. I don’t see that changing unless we do something.”

Two houses, one on South Quemoy Court and another on South Coolidge Way, have been raided by Aurora Police a total of five times since May 11, 2016. Weeks says the house a few doors down constantly has people coming and going.

Weeks recalls “nasty interactions with some of the tenants and their families.” He’s also watched a couple of raids go down from his driveway. The normally quiet street turns into a parking lot of police vehicles. Police say they’ve confiscated over a thousand marijuana plants from those houses.

“It’s not a free for all in this state. There’s this misconception around the United States that it is,” said Aurora Police Sergeant Scott Pendleton, discussing how policing has changed since Colorado voters approved personal use and commercial growth of marijuana. “What we’ve seen is pretty much a steady increase in the number of home grows, the number of seizures on our part have gone up dramatically in terms of plants and the weight of marijuana we’ve taken.”

In Aurora, individuals can have up to 12 marijuana plants inside of their homes. But the former tenants of the two homes causing such a nuisance in south east Aurora have produced hundreds of plants at a time.

“The Aurora City Attorney’s office is reviewing that and how to proceed with the nuisance ordinance. So, they will hopefully be able to remedy this in some way,” said Pendleton.

Eight people have been arrested for running these operations. Some have been charged with felonies, though sentences are light. Some receive probation but the cases are ongoing. But the homeowner who rents his two houses out, Mohinder Grover, has never been cited for a drug crime.

“We have to demonstrate that the property owner is knowingly allowing this to happen or participating in the illegal activity themselves. That’s not always an easy thing to do,” said Pendleton.

“While Colorado voters approved legal recreational marijuana in 2012, illegal marijuana operations remain an issue for our community. Under current Colorado law, Colorado residents may grow up to 12 marijuana plants; in these cases noted above, the number of plants seized clearly indicates a criminal intent. My constituents are understandably concerned as the continued use of these residences as illegal marijuana growing facilities impinges upon their ability to live in peace.”

Coffman went on to write:

These two grows are really just a drop in the bucket when it comes to illegal marijuana in a state with so much cannabis deregulation. “You look throughout the state, not just the city of Aurora, this is out of control. And it has been for some time now,” said Pendleton. The Aurora Police Narcotics team confiscated more illegal marijuana in 2017 than any year since Amendment 64 passed.