AURORA, Colo. — The City of Aurora announced the selection of current Division Chief Vanessa Wilson as interim police chief after the deputy chief who was supposed to take over the top job withdrew his name and announced plans to retire instead.

The search for a permanent chief is ongoing and is expected to last between 6-8 months.

Deputy Chief Paul O'Keefe announced last week in an email to city administrators that he would remove his name from consideration for interim chief. He was supposed to become interim chief when current Chief Nick Metz officially retires this week.

In the email, O'Keefe said he hopes removing his name from consideration will help the department move beyond what he calls "the negative depiction currently being broadcast." O'Keefe's retirement is set to take effect in March 2020.

The department has come under scrutiny over the case of Officer Nate Meier, who admitted to consuming alcohol during a shift and was later found passed out behind the wheel of his patrol car last March.

Wilson admitted she's taking over at a turbulent time for the department.

"Let's be honest, I'm stepping in at a very turbulent time," Wilson said. "I acknowledge that the community is angry. Their trust has been shaken and our relationship has been fractured."

O'Keefe was the first officer who responded that day and he said in a report that he had smelled a faint odor of alcohol but did not conduct a sobriety test.

In the documents, O'Keefe said Meier showed no other signs of impairment, but body camera footage shows otherwise. In one video, Meier is seen in the driver's seat of his green Ford Taurus with his eyes closed and his chin to his chest.

Blood tests later showed Meier's blood-alcohol level was more than five times over the legal limit for driving. Meier kept his job, but was demoted. He was never arrested.

Wilson, in her new role, pledged accountability and said they're going to work to rebuild the trust that was lost.

"I will state, no one is above the law, and you expect professionalism from this department, and that is what we are going to deliver," Wilson said.

She also noted that despite recent controversies, she's still proud to wear the uniform and said every officer should not judged by the actions of some.

"The men and women, the 1,000-plus employees, officers, dispatchers and civilian personnel, dedicated their lives to this profession," she said. "There should not be a blanket condemnation of this agency."

Wilson said Monday marks the beginning of her 24th year with APD and said she plans to apply for the permanent position.

She released a letter to staff ahead of Monday's announcement.

That letter can be viewed here. 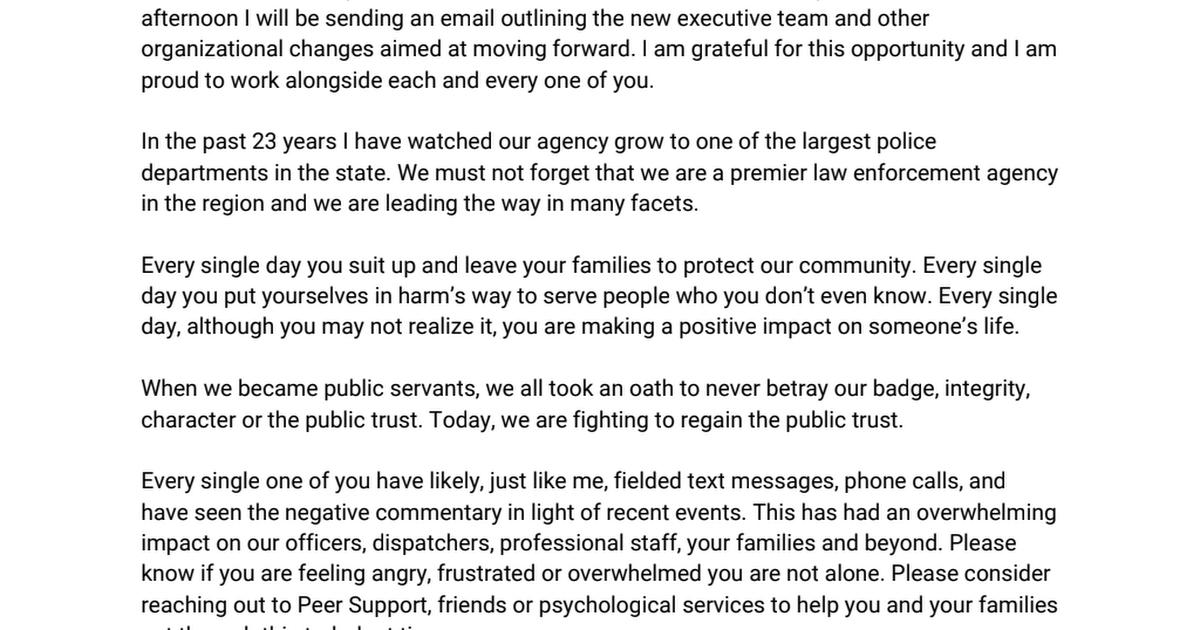 In September, Chief Nick Metz announced his retirement after four years with the department in a letter posted to the Aurora Police Department's Facebook page.

His retirement takes effect this week, at the end of 2019. Metz worked in Seattle for more than 30 years before coming to Aurora.