2 officers in the photo have been fired and one has resigned. Another officer who received the photo and responded with "HaHa" has also been fired. 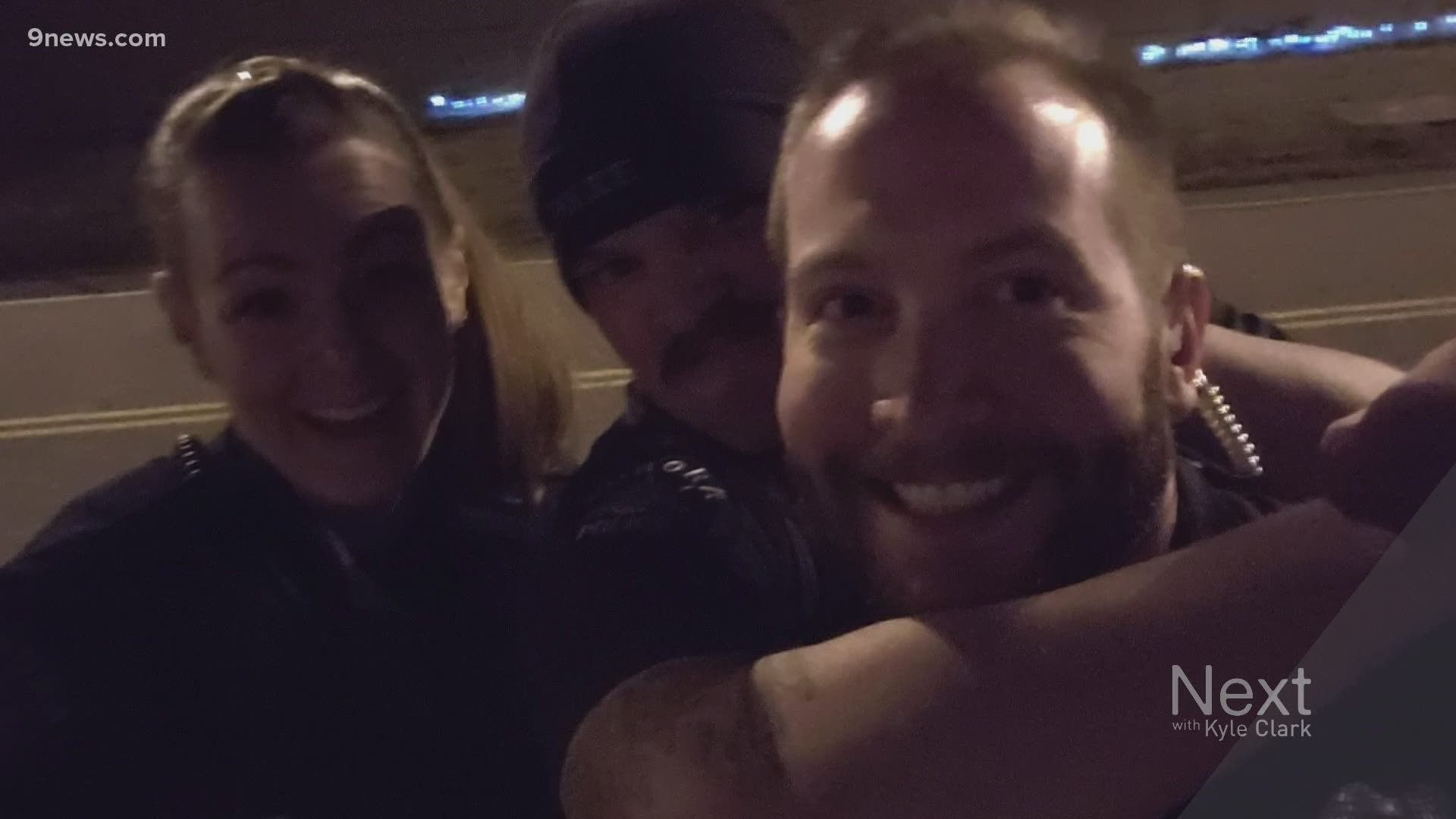 AURORA, Colo. — One of the three officers who took a photo depicting a carotid hold near the memorial for Elijah McClain said it “would be funny” and was meant to “cheer up” a fellow officer who was on suspension.

That’s according to a 244-page internal affairs investigation released by the Aurora Police Department (APD) on Friday. Two of the officers seen in the photo, Kyle Dittrich and Erica Marrero, were fired. The third, Jaron Jones, resigned on Thursday – before he could receive his punishment from the department.

The photo was taken on Oct. 20, 2019 – less than two months after McClain died following a confrontation with Aurora officers who were responding to a call of a “suspicious person” in the area.

One of the officers who confronted McClain before his death, Jason Rosenblatt, received the photo of Dittrich, Marrero and Jones and responded with “HaHa,” according to police.

Rosenblatt has also been fired.

Nathan Woodyard, another officer who detained McClain, received the photo and did not respond. He is still employed with the department. According to the internal affairs report, Woodyard said it “didn’t look like they were grieving” and that it made him uncomfortable.

“Really the whole incident has made me uncomfortable, so being at the memorial and being reminded of that is not something I want to remember or think about,” Woodyard is quoted as saying in the report.

Documents show that Dittrich and Marrero both responded to the scene the night of McClain's encounter with police, but it was after he had been taken away by ambulance.

An August 2019 report by Dittrich says he accompanied Woodyard to police headquarters where he stayed with him until he spoke to a psychologist, a union representative and his attorney.

Marrero responded alongside Dittrich to the scene of McClain's encounter with the police, according to her August 2019 incident report. She accompanied Rosenblatt as he went through the debriefing process and gave him wipes to clean his hand. Marrero helped Rosenblatt and Woodyard get home that night.

According to the report, Marrero said the photo was taken as a “hey, we’re thinking of you kind of thing” for Woodyard after they drove by the memorial on an unrelated call.

“I never intended for this photo to be something that is offensive to anybody,” she’s quoted in the report as saying. “… we were all going through tough times with everything that happened to Woody …”

According to the report, Jones said it was his idea to simulate the carotid hold in the photo.

“I believe the public will be … appalled by the photo,” Jones is quoted as saying in the report. “…my sole intention was to help a brother out, and whether I used correct judgment or not is on me.”

The report says Dittrich told investigators, “Jones put his arm around my head kind of in a half buddy-buddy but also sort of as a homage to the carotid control hold.”

Dittrich said when he later spoke to Woodyard, he said, “hey, that’s not cool dude.”

According to the report, Rosenblatt said he responded “HaHa” because “people that know me know that I have a nervous laugh and I wanted to give something short and concise and not engage in any way, and just let them know and kind of be done with it.”

Rosenblatt said he didn’t show his supervisors the photo because “I was under a lot of stress from this incident and I just wanted it to go away.”

APD first became aware of the photo last week. In a note that was included in the internal affairs report, Interim Police Chief Vanessa Wilson says she wants the investigation done as “expeditiously as possible.”

“This is due to the alleged misconduct, the risk of public disclosure, the high-profile nature of the underlying incident, and the possible adverse and potentially violent response by the public …” she wrote.

The photo was released the Friday afternoon before Fourth of July weekend.

Both Dittrich and Marrero later apologized for the photo in letters to the department.

“I know from an outside perspective the photo is something which people may find as disrespectful, but I want you to know in no way, shape or form was that the intention of it," Marrero wrote. "I know the gesture in the picture appears to be in disrespect towards Elijah but, for myself, that was not the intent of the photo being taken and it was merely that 'We were thinking of you.' Having said that, I realize in hindsight that the photographs that were sent are in poor taste and that they can impact the public’s perception of law enforcement and the trust they have in us negatively. For that I cannot begin to apologize enough.”

“In September of last year, I saw my friend hurting and wanted to cheer him up for a brief moment," Dittrich wrote. "I regret the actions during this incident, but mostly I regret the hurt I brought about by doing what I did.

"If I could change things, I never would have taken that photo. I realized only too late that what I was doing was wrong, and could not have imagined the impact that photo could have today. The world of law enforcement has changed significantly since the death of George Floyd in Minneapolis.”

RELATED: ‘They should have been fired long ago:’ Activists respond to photos of officers mocking Elijah McClain’s death

The Federal Bureau of Investigation (FBI) and Department of Justice (DOJ) have said they are considering a federal civil rights case related to McClain’s death.

McClain’s family released the following statement about the photos: