'I do have remorse': Fired Aurora officer fights for job after driving with hobbled woman on floorboard of patrol car

Former Aurora Police Officer Levi Huffine was fired for the August 2019 incident. The Civil Service Commission will make a decision on his appeal. 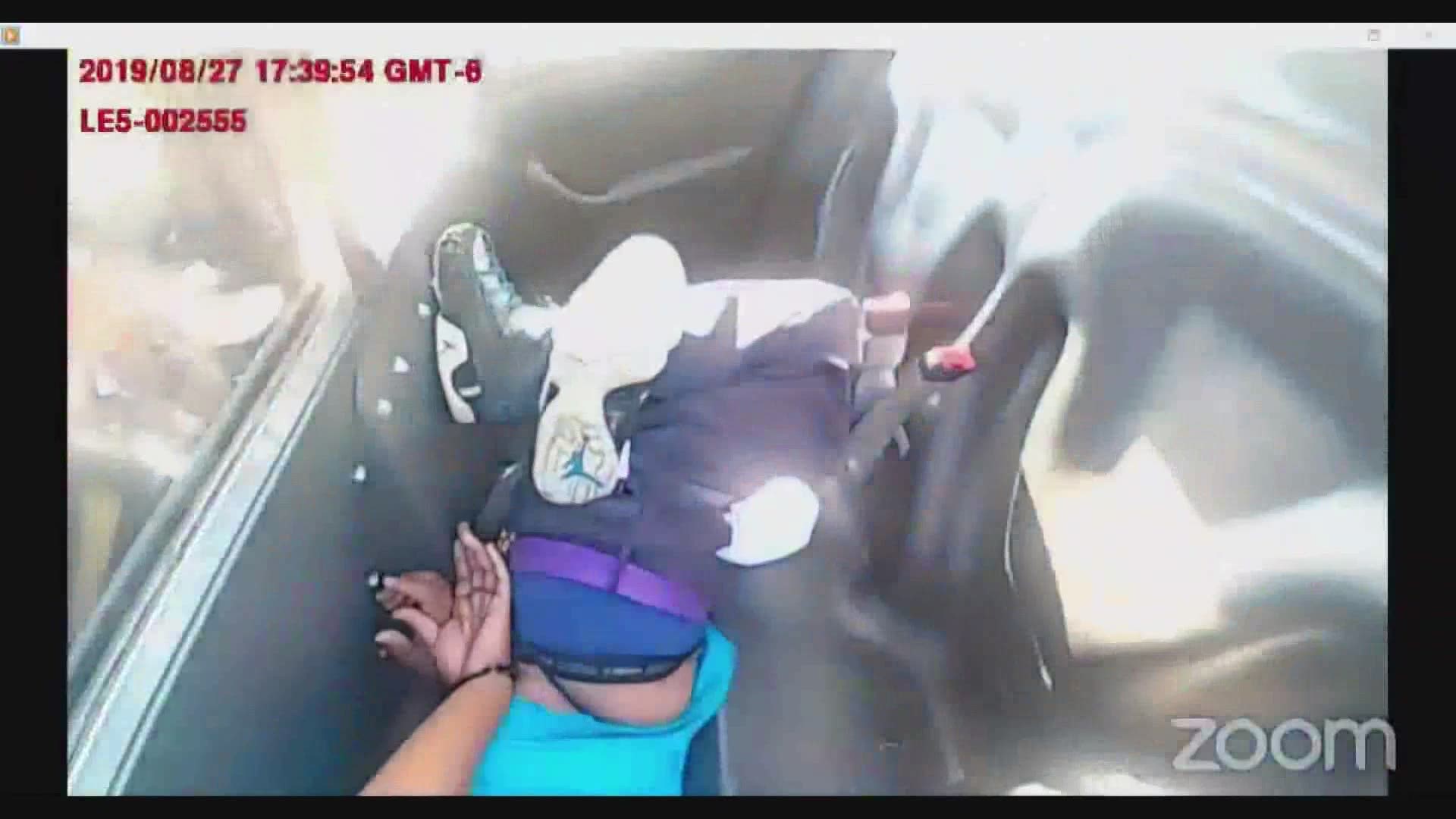 AURORA, Colo. — Following a three-day appeals hearing, Aurora's Civil Service Commission will now decide whether to uphold the firing of an officer who drove with a restrained woman pinned on the floorboard of his car while she begged for help.

Shataeah Kelly's cries for help and her position in the vehicle were recorded by the body camera of former Aurora Officer Levi Huffine, who had placed the camera in the window of the vehicle.

Aurora Police (APD) Chief Vanessa Wilson fired Huffine in February for the August 2019 incident. He appealed the decision and the commission will now decide whether to uphold his firing or reinstate him.

RELATED: Aurora officer fired after leaving a woman restrained in his patrol vehicle for 21 minutes while she said she couldn't breathe

According to the notice from Wilson regarding his firing, Huffine transported Kelly on Aug. 27, 2019, after she was arrested on municipal charges resulting from her involvement in a fight.

Kelly was placed into a soft restraint hobble and slid onto the floorboard of the patrol vehicle with her head on the floor for about 21 minutes, the notice says.

"Twenty minutes passed by she was in there; I'm sorry, it was a mistake, but I had no idea she was in an inverted position in the back of my car," Huffine testified Thursday.

When asked by city attorney Isabelle Evans if he chose to ignore that statement, he responded, "correct."

"I do feel remorse," Huffine said during his testimony. "I don't show my emotion, I'm not a public emotion person. I do go home and I do feel bad for Ms. Kelly."

Video shown during day one of the hearing on Tuesday shows Kelly repeatedly begging for help while her head is pinned to the floorboard during a 21-minute ride.

“Please don’t let me die right here officer, officer, please lift me up, this hurts,” Kelly is heard saying while she’s in a hobbled position with her hands and legs restrained.

“I’m about to break my neck,” Kelly goes on to say from an inverted position.

Following the incident, the police department made a change in policy to forbid officers from transporting detainees in hobbles in the back of the patrol cars.

On Tuesday, Wilson laid out her reasoning for firing Huffine. She called what occurred “beyond human decency.”

“That’s not what we’re hired to do,” Wilson said while testifying. “We are not the judge, jury and executor, and we are not to treat people inhumanely like they don’t matter, and he is lucky that she did not die in the backseat of the car, because he would be in an orange jumpsuit right now.”

Carrie Slinkard, the attorney representing Huffine, said her client has been made a scapegoat for larger issues within APD, which has recently made headlines for a series of incidents involving its officers.

RELATED: Aurora Police chief says she is 'deeply troubled' after her officers detained and handcuffed kids while mistaking a car for stolen

RELATED: If you're going to complain to Aurora Police, make sure you have the right Aurora

“We would not be sitting here today if the Aurora Police Department and the chain of command had handled incidents like this properly from the beginning,” she said during her opening statements.

Slinkard alleged that Huffine was not breaking protocol at the time when he “hobbled” the suspect, who he accused of attempting to escape his patrol car and trying to open the back door.

Wilson said that the escape allegations are moot, since the handles would not have opened from the inside anyway.

During the video, Kelly, whose charges were later dropped, is heard growing agitated at the officer before falling onto the floorboard.

“I can’t breathe,” Kelly, who is Black, says repeatedly as she apologizes to the officer. He is not heard acknowledging her in the video.

“I’ve never felt so much racism in my life,” Kelly says at one point.

Wilson acknowledged the woman’s complaints during her testimony.

“The most disturbing part of this is, as an African American female, that she denigrates herself to the point, asking for help, that she actually calls him ‘master,’” Wilson said. “That, to me, is disgusting.”

Wilson’s decision to fire Huffine overturned a previous recommendation from the department’s chief review board for a 180-hour suspension.

During her testimony, Wilson said the decision was in part because Huffine didn’t acknowledge that this incident was different from others involving agitated suspects.

“To me, he just treats everyone this way, and the crying, the panic, the position she was in, the fact that she was in pain and begging for help didn’t matter to him, she was just another drunk,” Wilson said.

Wilson told Huffine, according to testimony, that she felt his apologies were insincere. He responded to that on Thursday.

"She felt that I was focused on my career and how this was going to affect me," he said. "It was something that, it was affecting me, but I understand, that if I would have known she was in that position, absolutely I would have changed her position, but I did not know. Looking back, in hindsight, yes I'm very remorseful that I continued, made the choices."

Wilson said Huffine could have received criminal charges had the woman suffered serious injuries or died.

“He’s lucky, and we’re all lucky, God bless this woman, that she didn’t die in the backseat of the car,” Wilson said.

Day two of the hearing, on Wednesday, began with Huffline's attorney calling University of Colorado Denver (CU Denver) Professor Dr. Paul Taylor to testify. He's a former law enforcement officer whose research focuses on police decision-making and human error in the context of potential use-of-force encounters, according to his CU Denver bio.

Taylor testified he believed there was no issue with the woman being "hobbled" because she was being arrested for a physical altercation and had made verbal threats. He said there was a real threat of a window being kicked out, in his opinion. He said, however, it was "risky" to transport the hobbled woman without a seatbelt.

"From my perspective, and my view of best practice, it's an extraordinarily dangerous practice to transport someone handcuffed and completely hobbled and in handcuffs without a seatbelt in the back of a patrol car," Taylor said. "Many departments have moved away from that type or transport entirely."

He said one reason they've moved away is because officers can't see them laying down on the seat behind but also because they could fall off the seat.

"There is a tendency for people to people either roll off or fall of the seat and onto the floorboard," he said. "I would highly suspect that that regularly happens a lot to officers in the Aurora Police Department who have transported in this way in the past."

He said once she fell off the seat and behind him, Huffine would not have been able to see her in that position based on where he was sitting and the design of the patrol car. He said, however, he has no way of knowing whether Huffine could see if she was still on the seat when he looked back.

Taylor repeatedly suggested during his testimony that this case was less about one officer's decision and more about a bigger policy problem within the department. He noted that the woman said she couldn't breathe many times before she was seen in the body camera footage on the floor, but it was not problematic for anyone until viewed in the context of the body camera footage.

"I personally think an ambulance should have been called when she said, 'I can't breathe'. The initial transport wasn't an issue for the chief," Taylor said. "That's absolutely a high liability area, the fact that Officer Huffine missed it though, appears to be an organization issue, as opposed to an individual officer making a malicious decision."