'They represent victims who have a right to be heard': King Soopers shooting suspect charged with 54 counts 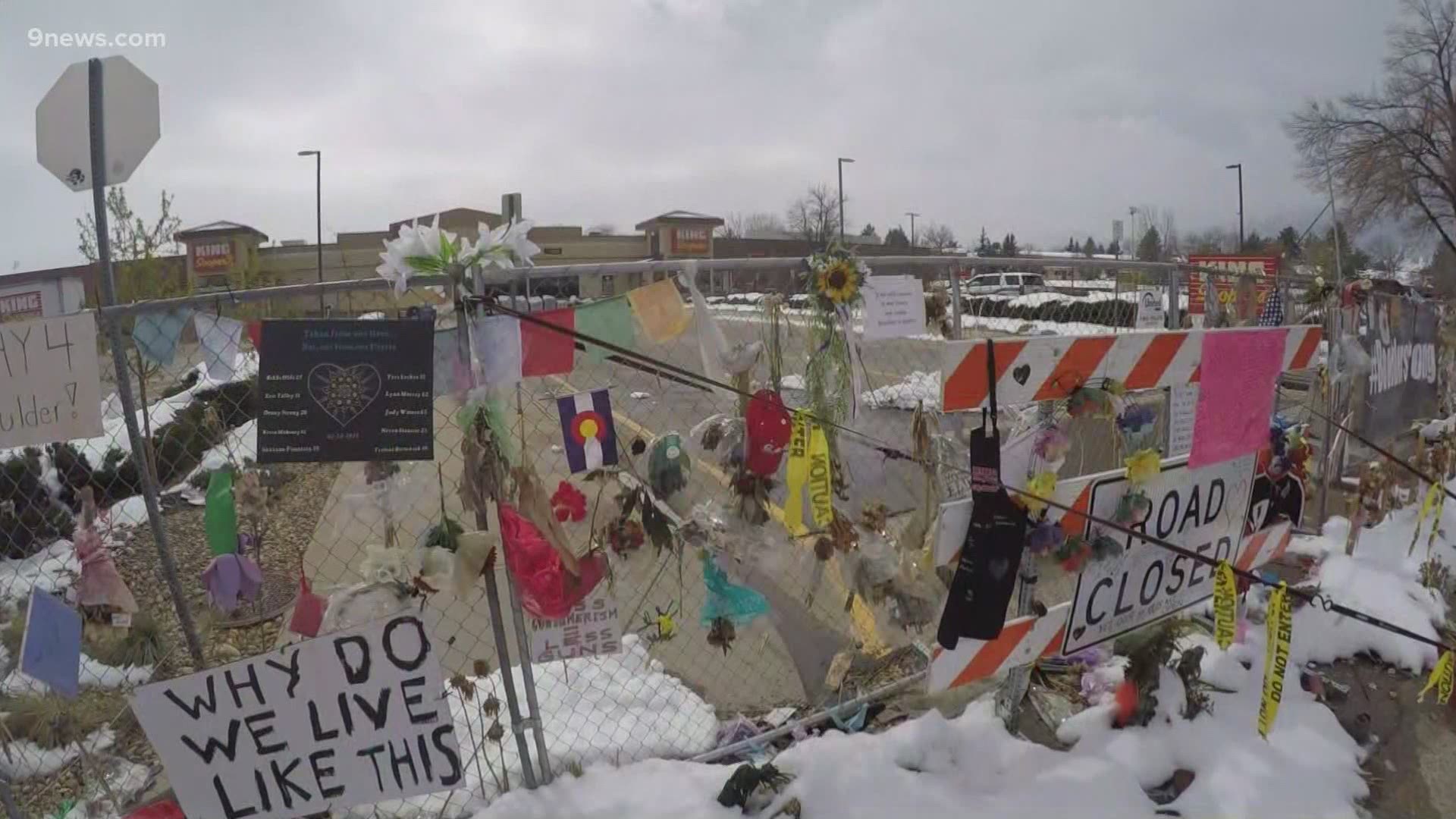 BOULDER, Colo. — All nine civilians who were killed when a gunman opened fire at a Boulder King Soopers one month ago were killed prior to police arriving at the store, prosecutors said during an update Thursday.

Boulder Police Officer Eric Talley, who was among the first three officers to enter the store on Table Mesa Drive, is the 10th victim of the shooting.

"Officer Talley was killed within seconds of entering the store," said District Attorney Michael Dougherty. "And then Boulder Police officers, the open space ranger, the sheriff's deputy, they all bravely and courageously tried to get into the store as quickly as they possibly could. And it was less than 30 seconds after Officer Talley was killed."

Dougherty said one officer from the Boulder Police Department (BPD) discharged his or her weapon at the suspect, who has been identified as 22-year-old  Ahmad Al Aliwi Alissa.

According to Dougherty, that officer fired seven times and struck the suspect once in the leg. He said he'll be reviewing evidence, and in the next month or so, will release his decision on whether that use of force was justified.

The suspect now faces a total of 54 counts related to the March 22 shooting.

He had previously faced just 10 counts of first-degree murder and one count of attempted murder. Prosecutors filed a motion to amend the charging document this week and it now has a total of 54 charges which include the following:

"They represent all of the victims who have a right to be heard and supported," he said. "That's why these additional charges are being filed."

The updated charging document associates a victim with each charge, and Dougherty said they're listed in the order in which things happened.

He said Neven Stanisic is listed first because he was the first victim who was shot in the parking lot outside of the store. The 10th first-degree murder charge represents Talley.

The lone charge of assault is related to a woman who fell while fleeing from the store and fractured a vertebra in her spine, according to Dougherty.

He said there will likely be additional charges filed, which include crime of violence counts, which are sentencing enhancers. More attempted murder charges are also possible.

About 115 people were inside the store when the shooting began and another 25 were in the parking lot, according to prosecutors.

"I know that in other mass shootings that have taken place across the United States, there have been times where they were unable to ever identify a motive," Dougherty said Thursday. "You don't need motive to prove that someone acted with intent and after deliberation in court, but for our community and especially those families, they wanted to know why. So we're going to keep working as hard as we can to uncover that."

Alissa brought the gun from a store in Arvada, where the owner said in a statement that the sale was lawful.

The owner of Eagles Nest Armory said the shooting suspect passed a background check before buying the weapon.

Prior to the shooting, the only charge Alissa had faced previously was for a third-degree assault, a misdemeanor, that occurred Nov. 27, 2017, while he was in high school. According to a police report, Alissa "cold-cocked" the victim in a classroom and then punched him several more times after the victim had called him racial names weeks earlier. Alissa was issued a court summons for the incident in February 2018.

The suspect is next due in court on May 25.

King Soopers also announced Thursday that the BoulderStrong Community Resource Center located at 603 South Broadway will remain open to the public Tuesday through Sunday. It will operate between 11 a.m. and 7 p.m.

King Soopers associates, customers, and community members can meet with counselors and other professionals from Mental Health Partners.

Comfort dogs, trauma counselors, and even massage and acupuncture therapy will be available.

RELATED: 'They put their lives at risk': Officers among first to respond to Boulder mass shooting saved others