'They put their lives at risk': Officers among first to respond to Boulder mass shooting saved others

Authorities said at a news conference Friday that the investigation was progressing rapidly and the motive of the shooter was not known. 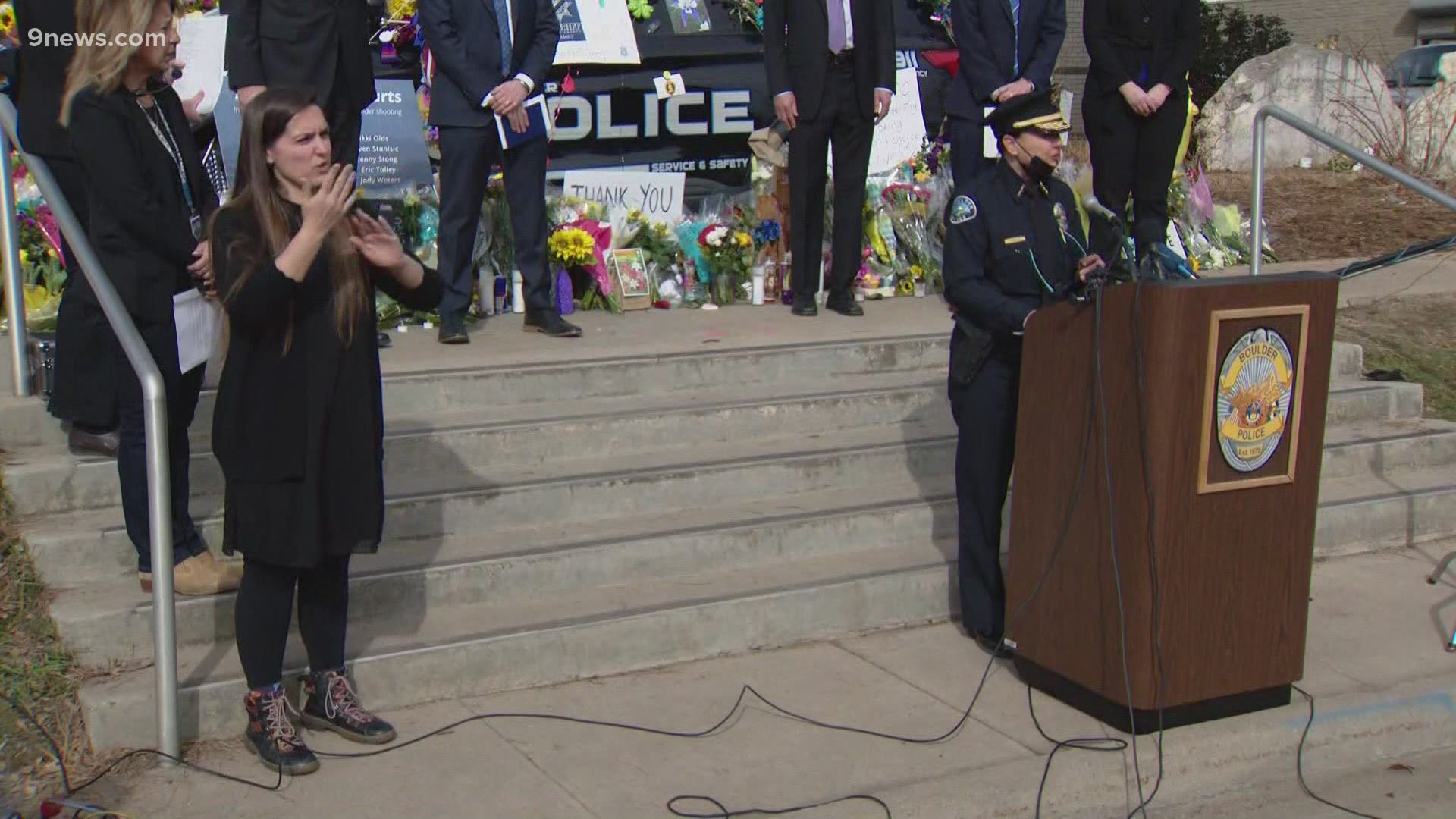 BOULDER, Colo. — Boulder police and University of Colorado-Boulder (CU-Boulder) officers who were among the first on scene at the King Soopers shooting ran into the store amid the gunfire, and one officer — a two-year veteran of the Boulder Police Department (BPD) — exchanged gunfire with the shooter.

That was among the updates that authorities provided at a news conference Friday morning, as Boulder Police Chief Maris Herold and Boulder County District Attorney Michael Dougherty talked about the investigation into Monday's shooting that took the lives of 10 victims.

The DA's Office will file additional charges of attempted murder in the coming days related to the BPD and CU-Boulder officers who ran into the store as shots continued to be fired, Dougherty said. 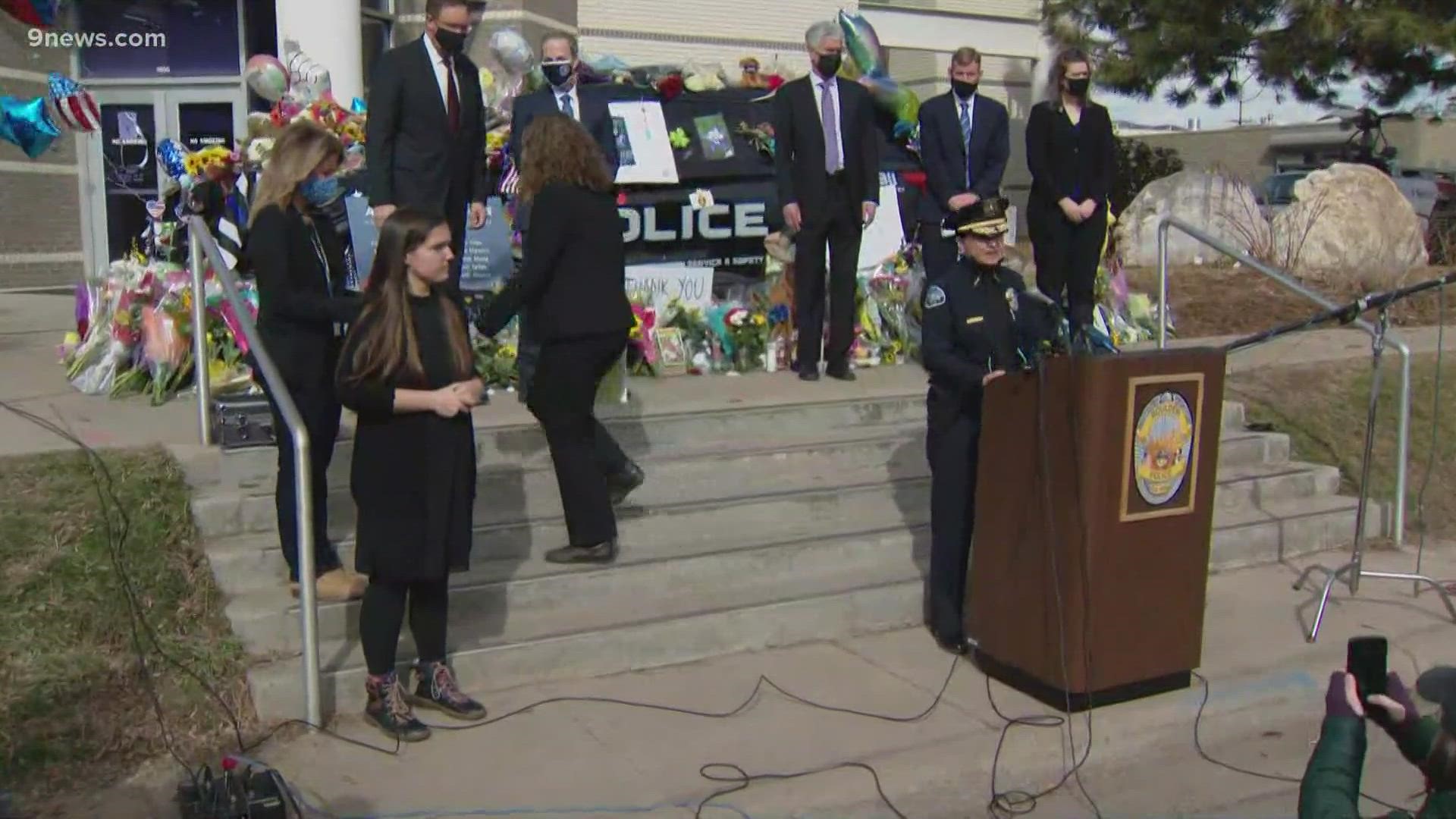 The BPD officer who exchanged gunfire with the shooter was not injured and was put on administrative leave pending an investigation, as is protocol when an officer fires their weapon, Dougherty said.

BPD said later Friday on Twitter that Officer Eric Talley, who was among those killed in the shooting, led a team of officers into the store within 30 seconds of arriving at the scene.

We’ve seen comments from some in our community who questioned the response time of our officers Monday afternoon. We think it’s important to share that Officer Talley led a contact team of officers into the store within 30 seconds of arriving on scene. Yes, 30 seconds #Boulder pic.twitter.com/fvQAFnN0ry

Since the shooting, 167 individuals from 26 local and federal law-enforcement agencies have worked around the clock on the investigation, which was still in the early stages, though progressing rapidly, Dougherty and Herold said.

Investigators have put in more than 3,000 hours of work, completed 126 interviews and followed up on 223 tips and leads. They have collected about 20 digital media devices. The crime scene investigation in the parking lot has been completed and the vehicles released, Herold said.

Herold noted other agencies' assistance with processing the crime scene, which was one of the largest and most complex she had seen in her career. Both she and Dougherty praised the cooperation among the agencies and victim advocates.

Five days later, the motivation of the shooter was still a mystery.

"Why that King Soopers? Why Boulder? Why Monday? And unfortunately at this time, we still don’t have those answers," Herold said.

NBC reports that several law enforcement officials said the suspect appears to have a history of mental health problems, which might have been a significant factor in the shooting. Those same officials said, according to NBC, that "there is not, at this point, evidence that the shooting was an act of terrorism or a hate crime."

Ten people were killed in the shooting Monday at the King Soopers at 3600 Table Mesa Drive. Among the victims were three employees, a BPD officer, a local businesswoman and an actress who had appeared in multiple local productions.

Officers were dispatched to the store on a report of an active shooter about 2:40 p.m., and the suspect was taken into custody at 3:28 p.m., according to an arrest affidavit.

The fence around the King Soopers has become a wall of flowers and notes to remember the victims of the shooting. Both Herold and Dougherty praised the outpouring of support and grief from the community.

"It's just been extremely heartening for me to see how the community supports this police department and the victims involved in this unbelievable incident," Herold said. "For that, I just want the community to know that I'm very grateful."

"It’s my hope and my request that the support for the victims' families, and for everyone impacted by this horrific attack, continue all throughout the next few months, until justice is done in this case and beyond," Dougherty said.

The suspect, Ahmad Al Aliwi Alissa, 21, faced a judge for the first time Thursday morning. He was charged with 10 counts of first-degree murder, one for each of the victims, which included Boulder Officer Eric Talley. He also faces a charge of attempted first-degree murder for attempting to kill Officer Richard Steidell, who also responded to the scene, a charging document says.

RELATED: More charges likely against suspected Boulder shooter, defense to get status on his mental health

The suspect's next court date will be announced next week.

Dougherty confirmed that the suspect legally purchased the gun used in the shooting days before at a store in Arvada. He described the gun as a a Ruger AR-556 pistol. The shooter also had a 9mm handgun that he didn't fire, Dougherty said.

He said that he wants the court proceedings to stay in Boulder County. Because of that, he said he will be limited in the information he can share about the investigation to avoid a defense request to move the case to another jurisdiction. He emphasized that the suspect has a right to a fair trial.

Editor's note: An earlier version of this story had an error in how long the officer who exchanged gunfire with the shooter was with BPD based on inaccurate information initially provided by the department. It has since been updated.