Remembering the victims of public violence in Colorado

Colorado has seen its share of tragedies. These are the names of people lost in incidents of public violence in Colorado. 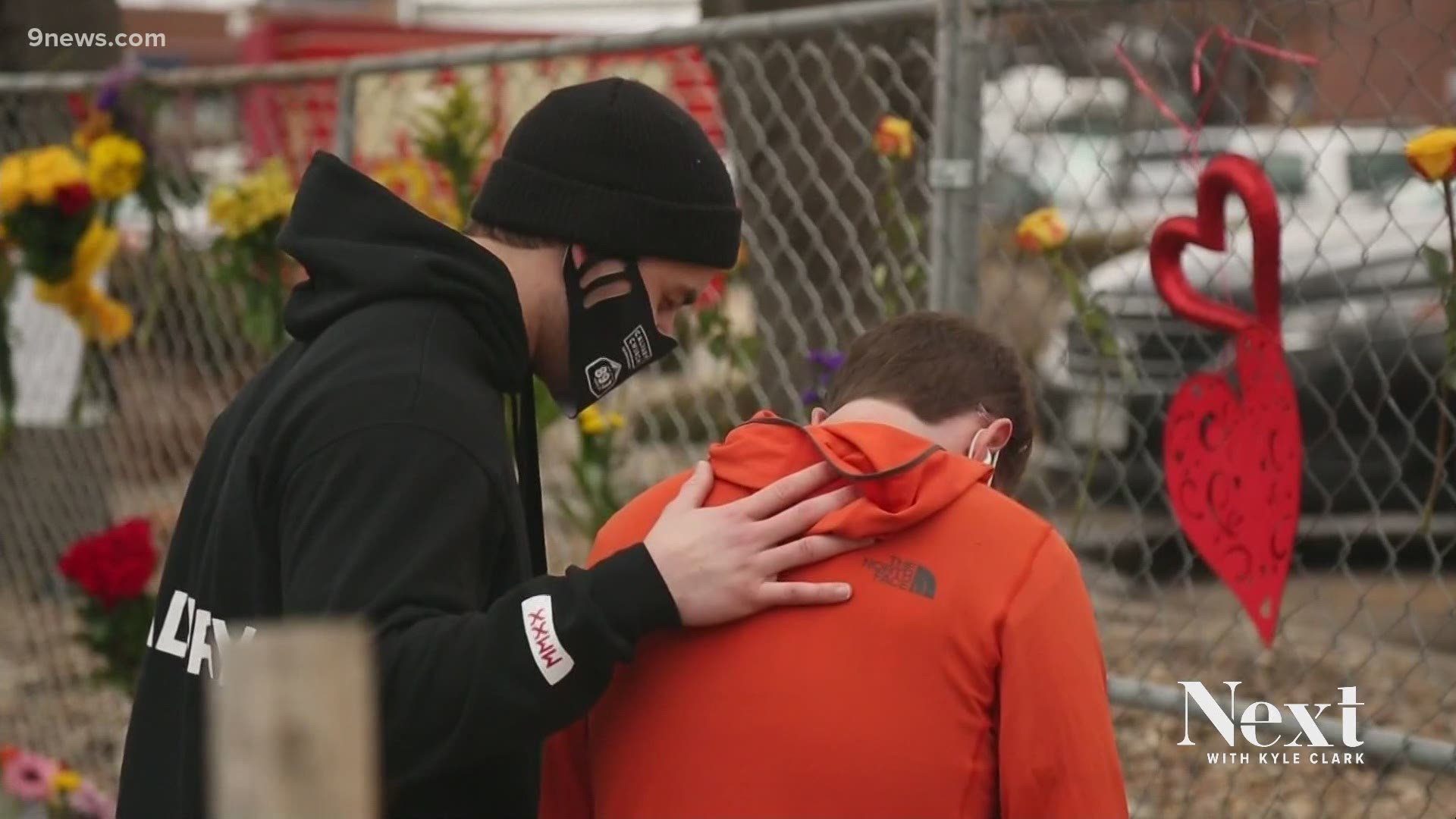 DENVER — Colorado has seen more than its share of tragedies over the decades.

Countless families and friends are continuing to mourn the people lost to cases of public violence in the state. The names of the people responsible aren't important; what does matter are the identities and memories of the people who were lost.

From Aurora to Bailey to Kiowa County, tragedies have touched all corners of the state. Here are the names of the people who will not be forgotten.

Denny Stong was the youngest victim of the shooting and an employee at the store where it happened. He was remembered for his positivity and being the type of person who everyone knew.

Rikki Olds was a manager at the King Soopers, and is remembered for her colorful hair and independent spirit.

Tralona Bartkowiak was the co-owner of Umba in Boulders's 16th Street Mall. A friend remembered her as a bright light who took trips to Thailand with her sister to buy crafts to support local women there.

Suzanne Fountain is remembered as a talented actress who once performed in a play at the Denver Center for the Performing Arts.

Teri Lieker was a courtesy clerk at the King Soopers where the shooting occurred, and also participated in the Special Olympics in track and field, as well as skiing.

Boulder Police Officer Eric Talley leaves behind a wife and seven children. He was one of the first people to enter the store after the shooting, and in 2013, made the news for saving a family of ducklings from a storm drain.

Jody Waters was a member of Colorado's fashion community and dreamed of one day opening her own boutique store.

Credit: Castillo family
Kendrick Castillo was killed in the STEM School shooting in May 2019. He is lauded as a hero for rushing at one of the gunmen to protect his classmate

Kendrick Castillo will always be remembered as a hero for lunging at one of the shooters who entered his classroom, likely saving the lives of his classmates.

Those who knew him remember him for his infectious smile, deep faith and warm heart. The 18-year-old loved science and was able to fix almost anything involving a computer.

“Love, the love for anybody that he met. I mean everybody. He was compassionate,” his father John Castillo said. “We all have the ability to be a little like Kendrick.”

Carlos Moreno leaves behind a wife, three daughters and two granddaughters. He worked as a handyman at the Auraria Higher Education Center and was described as "always smiling, waving and having a great attitude."

Victor Vasquez left behind a wife and two daughters. They were shopping in Walmart before the shooting happened, and he told them to run immediately, possibly saving their lives.

Pamela Marques left behind a husband, daughter and two granddaughters.

RELATED: Emotional testimony from victims, then life in prison for Walmart killer

Officer Garrett Swasey was part of the University of Colorado - Colorado Springs Police Department. His actions are credited with saving multiple lives the day of the shooting. He left behind two children.

Ke'Arre Stewart was an Iraq War veteran who ran back into the clinic after shots rang out to warn people about what had happened. He had two children.

Jennifer Markovsky was at the clinic with a friend and was the mother of two children.

Arapahoe senior Claire Davis is remembered for being outgoing, a good athlete and someone who loved horses. She was sitting outside the school's library when she was shot, and died eight days later.

Jonathan Blunk was a military veteran who pushed his girlfriend to the ground during the shooting and shielded her with his body, likely saving her life.

AJ Boik had recently graduated from Gateway High School and is remembered for his smile and quick wit. He was supposed to attend the Rocky Mountain College of Art and Design.

Jesse Childress was remembered by those who knew him as a "good man." An Air Force reservist, he shielded his friend during the shooting, likely saving his life.

Gordon Cowden attended the movie with with his two teenage daughters. Some of his last words to his family were "I love you! I love you both!"

Beautiful, passionate, vibrant, full of life, witty, an unforgettable smile and a wicked sense of humor are all things friends and family reference when remembering 24-year-old Jessica Ghawi.

Jessica loved sports, especially hockey, and she aspired to be a successful sports reporter. She interned at 104.3 The Fan and Mile High Sports Radio, two Denver-based sports radio stations.

John Larimer, 27, was a Navy serviceman who was so excited about seeing "The Dark Knight Rises" that he stopped at a local store to buy a Batman t-shirt, mask and cape.

His girlfriend said he covered her with his body when shots were fired, likely saving her life.

Matt McQuinn is also believed to have sacrificed himself to save his girlfriend, who attended the movie with him. He was famous for his Halloween costumes and fun-loving attitude.

Micayla, or "Calya" to her friends, was the youngest of three children. She attended the Community College of Aurora while working at Subway as a sandwich artist - and while she saved money for a trip to India, she refused to accept any help.

Veronica was described as a sweet and intelligent young girl who liked Disney princesses and was excited about life. She had just started swimming lessons earlier that week.

Her mother was also shot and remained in critical condition in the days following the shooting.

Alex Sullivan was celebrating his 27th birthday by attending the movie with several friends and coworkers. He is described by friends as a big man, in stature - standing a full 6' 4" - and in heart. His good humor served him well in his job as a bartender at a local Red Robin. In a statement released by his family, Alex was remembered as "smart, funny and above all, loved dearly by his friends and family."

Alex Teves was studying for a career in physical therapy at the time of his death. He was an avid Arizona Wildcats football/basketball fan, an exceptionally loyal friend and a loving son. During the attack, he shielded his girlfriend from gunfire.

At the time of her death, Wingo's two daughters were 5 and 9 years old. She was remembered as a loving mother and for being generous to everyone who knew her.

A final message Emily Keyes sent to her family read, "I love u guys." Friends and family remembered her as a "great kid" and on her own, she researched organ donation. One of her corneas was later given to a retired New York City policeman.

RELATED: Hundreds ride for Emily Keyes on anniversary of death

Corey DePooter, a junior, was an avid outdoorsmen who one day dreamed of being a U.S. Marine.

Kelly Fleming dreamed of being a songwriter and author.

Sophomore Matthew Kechter played on the offensive and defensive lines of the football team and was an "A" student.

Sophmore Daniel Mauser excelled in math and science and was a straight A student who was posthumously accepted into the National Honor Society.

Freshman Daniel Rohrbough loved electronics and computers, and worked at his father's stereo business after school.

Dave Saunders was a computer and business teacher at Columbine for 25 years, and also coached the varsity girls' basketball and softball teams. He helped get more than 100 students out of harm's way by herding them away from the shooters.

Rachel Scott was a devout Christian whose diary has inspired countless people since her death.

After graduation, Isaiah Shoels dreamed of being a music executive or comedian, and attending an arts college.

A Wisconsin native, he loved to go four-wheeling in his truck, which became a memorial in the Columbine parking lot.

Lauren Townsend was a senior and captain of the volleyball team, as well as a candidate for valedictorian of her class.

Kyle Velasquez was described as a "big teddy bear" and had only been attending Columbine for a few months prior to the shooting.