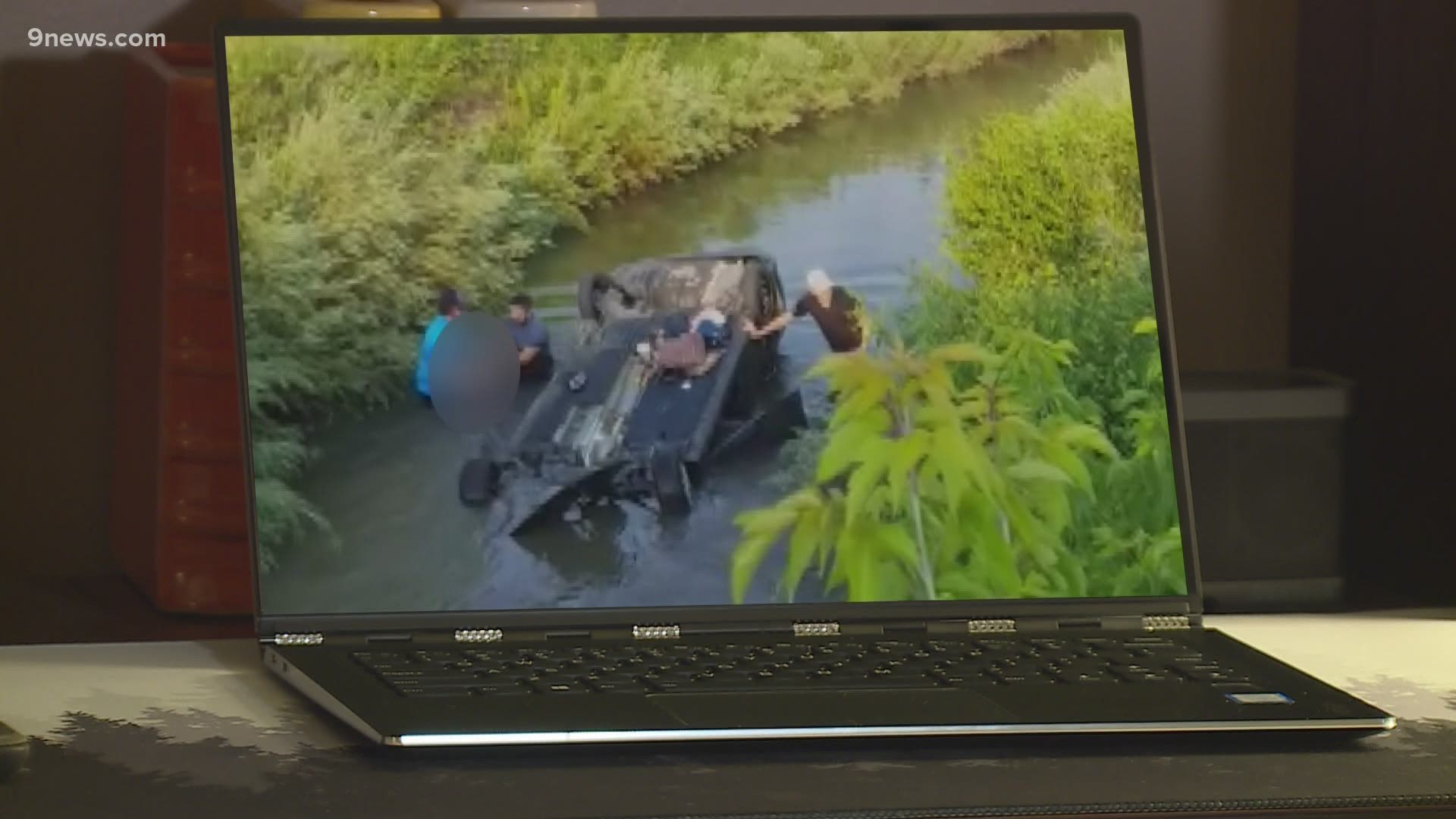 ARVADA, Colo. — When Rob Reynolds completed an EMT class more than a decade ago, he didn't end up going down that career path – instead, he said his calling was to start his own practice as a therapist, now owning Family Strong Counseling in Arvada.

The emergency skills he learned in that EMT course were put into practice Saturday night as he was driving home with his son from playing golf.

Reynolds said as he was driving, he noticed a driver to his right that started to drift.

"She kind of hit the curb and bounced off a guardrail, which kind of shot her back across. You know, she probably overcorrected, shot her back across right in front of me," he said. "So there's a guardrail for the first canal, and that's the one she bounced off of when she cut back in front of me. There's like a space, like a service road in between the two canals and she just sort of hit that space perfectly."

That's when he said the car flipped over and landed in the canal below near the intersection of 80th Avenue and Kipling Street.

"It happened so fast and I felt such an urgency. I just remember stopping the car, put the hazard lights on, and I said, 'Hey Siri, call 911,' that was my first instinct," Reynolds said.

Credit: Rob Reynolds
A car sits flipped over in a canal in Arvada Saturday night.

That gut instinct also led him and several other bystanders down the hill and into the canal themselves, where the water appeared to be waist-deep in some spots, as seen in a video of the incident sent to 9NEWS.

Several bystanders, including Reynolds, can be seen rummaging through the car to try and find the driver quickly.

Eventually, the driver was pulled out of the submerged car to safety.

"I kind of reached my hands under to try to feel her. And miraculously, she was just like in this perfect position. And I just sort of put my hands under her shoulders and just kind of pulled her out and picked her up," he said.

He was unable to get the names of the other bystanders that went in to save the woman with him, but said he also credits the woman who stayed with his son by the car he was driving, while the rescue occurred.

"Ultimately, it just was, it just was a chain of people helping people. And that's mostly what I take away from it," he said. "I mean, maybe it's a cliché, but, you know, that's a big thing, especially in a world we live in. Just looking out for each other, caring about each other, you know, jumping in to help when we need help."

"There's people who stand ready to do this every day," he said, referring to first responders. "But, it's a new-found level of appreciation for those men and women who are ready to jump in to dangerous situations and help."

The driver, who was identified as 20-year-old Lindsay Jenson, was later arrested on eight charges including aggravated motor vehicle theft, possession of a financial device, possession of a defaced firearm, unlawfully carrying a concealed weapon, theft of motor vehicle parts – license plates, driving under restraint, no proof of insurance and careless driving.

"We are grateful for the community members who jumped in to save a person they didn't even know," Snelling said via email.