Can you trap and relocate squirrels in Colorado?

Trapping squirrels is legal in Colorado but not exactly recommended by the city of Denver. 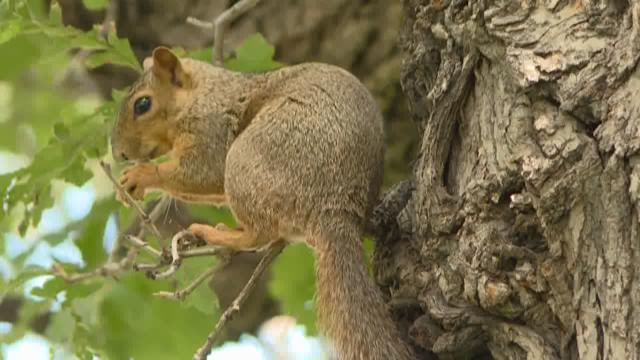 They’re fixtures in our yards and our lives. Trees add beauty to Janet Lammens’ Wash Park backyard – at least they did.

Over the past few weeks, squirrels have taken a liking to the sweet-tasting bark on the honey locust tree.

“They’ve eaten more than fifty percent around this limb,” Lammens said. “I think they just sit out here and eat until their heart’s content.”

Lammens said she tried pepper spraying the tree to keep the squirrels away. It seemed to work for a while, but the squirrels came back. That’s when Janet decided to lay down the trap.

“We bait it with peanut butter which [the squirrels] seem to like,” she said. “We’ve relocated five in about a week period.”

Lammens is not the only one in the Washington Park neighborhood trapping and relocating squirrels.

“A friend of mine who’s also having a problem with squirrels, she trapped 14,” Lammens said.

Trapping squirrels is legal in Colorado but not exactly recommended by the city of Denver.

“Not every critter that you relocate is going to survive in that new territory,” Vicki Vargas-Madrid said. Vargas-Madrid is the wildlife program administrator for the city. She said squirrels eating tree bark is a common complaint.

Before trapping a squirrel in Denver, Vargas-Madrid said a homeowner needs to get permission from Colorado Parks and Wildlife. One most also get approval from the landowner where the squirrels are released.

“It’s not just a simple solution of trapping squirrels and then releasing them wherever you feel is a good place to release them,” she said.

Releasing wildlife in any of Denver’s parks is prohibited. Vargas-Madrid said trapped squirrels must be relocated within ten miles of where they were captured. Those using traps must also label them with their name and contact information.

“They do have to check those traps once a day,” Vargas-Madrid said.

The city urges homeowners to try other solutions before trapping and relocating squirrels. Vargas-Madrid suggested placing netting around trees or using a repellant to keep the squirrels away.

Trapping squirrels is not always a solution,” she said. “In fact, relocation of wildlife is not a solution to urban wildlife problems.”

Janet Lammens understands that relocating the squirrels in her backyard is a temporary fix.

“My hope is that the squirrels can kind of get what they need and we can also take care of our trees,” she said.