Some of the many images gathered from inside and around the Capitol have already led to several arrests, including federal charges for some. 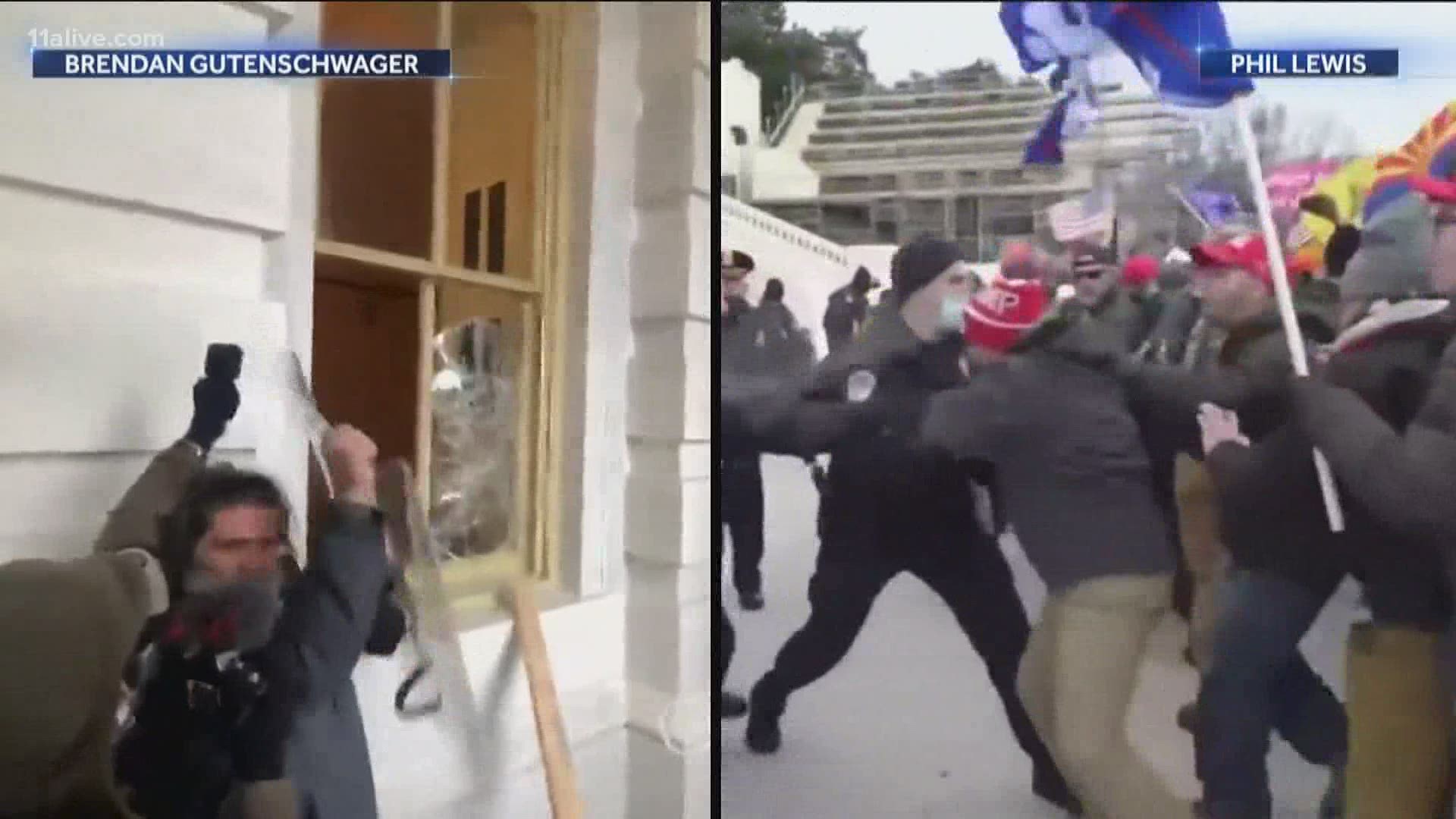 ATLANTA — 11Alive is learning more about those with Georgia ties arrested after a mob of President Trump's supporters violently took over the United State Capitol. The attack happened as members of Congress met to certify Joe Biden's Electoral College victory.

It's been four days since the violence sent the US reeling. Federal and DC authorities have been working to track down participants of the described insurrection, who were pictured smashing through windows and doors, stealing Capitol property and posing for pictures behind Congress members' desks.

Some of the many images gathered from inside and around the Capitol have already led to several arrests, including federal charges for some.

Here's what we know so far about the arrests with Georgia ties (please note that mugshots are not available through the District of Columbia):

Documents show that around 7:15 p.m. on the night of the riots, Georgia, along with several others, were outside in violation of a District-wide 6 p.m. curfew. When officers gave several warnings for the group to disperse, documents said they did not. Georgia and the group were placed under arrest as a result.

According to the US Department of Justice, Meredith is one of 13 people charged in federal court in connection to the riot. He was arrested Jan. 7, according to the DOJ and is being charged with making interstate threats to US House Speaker Nancy Pelosi.

According to CNN, citing court documents, Meredith allegedly sent texts messages to acquaintances that he wanted to shoot Pelosi on live TV or run her over. Another said he was going to Washington with a "s--- ton of ... armor piercing ammo."

CNN reported that the FBI searched Meredith's hotel room and other belongings in southwest Washington. Agents found three guns and hundreds of rounds of ammunition.

According to documents from the Superior Court of DC, Moore is charged with a felony count of carrying a pistol without a license.

While Moore does have a license to carry in the state of Georgia, he was not licensed in DC, and thus in violation of local laws.

According to a criminal complaint, an officer flagged Moore's Ford Ecoline around 6:20 p.m. Jan. 6 as he sat parked on the street.

The officer approached him and asked what he was doing, to which Moore replied that he was "supporting the Chinese that was currently protesting around the city." After presenting the officer with his ID, Moore pointed to a red MAGA hat on his dashboard and admitted to being "one of these."

When the officer asked Moore he was armed, he admitted to having a gun in his backpack. A search of the backpack revealed the loaded gun, along with two magazines of bronze bullets and several other loose bullets in a plastic bag. He was arrested and taken to police headquarters.

Other Georgia connections to the Capitol riots

Authorities confirmed that four people died during the riots in DC. Among them was a 34-year-old Kennesaw woman. It is believed that Rosanne Boyland suffered a "medical emergency," although the nature of the emergency was not specified.

A fifth fatality was later confirmed: a US Capitol Police officer.

1 / 11
FBI
Anyone with information regarding these individuals, or anyone who witnessed any unlawful violent actions at the Capitol or near the area, is asked to contact the FBI's Toll-Free Tipline at 1-800-CALL-FBI (1-800-225-5324) to verbally report tips