The city is looking into putting the statue toppled overnight into storage, though Denver Parks and Recreation said they had hoped to rebrand it. 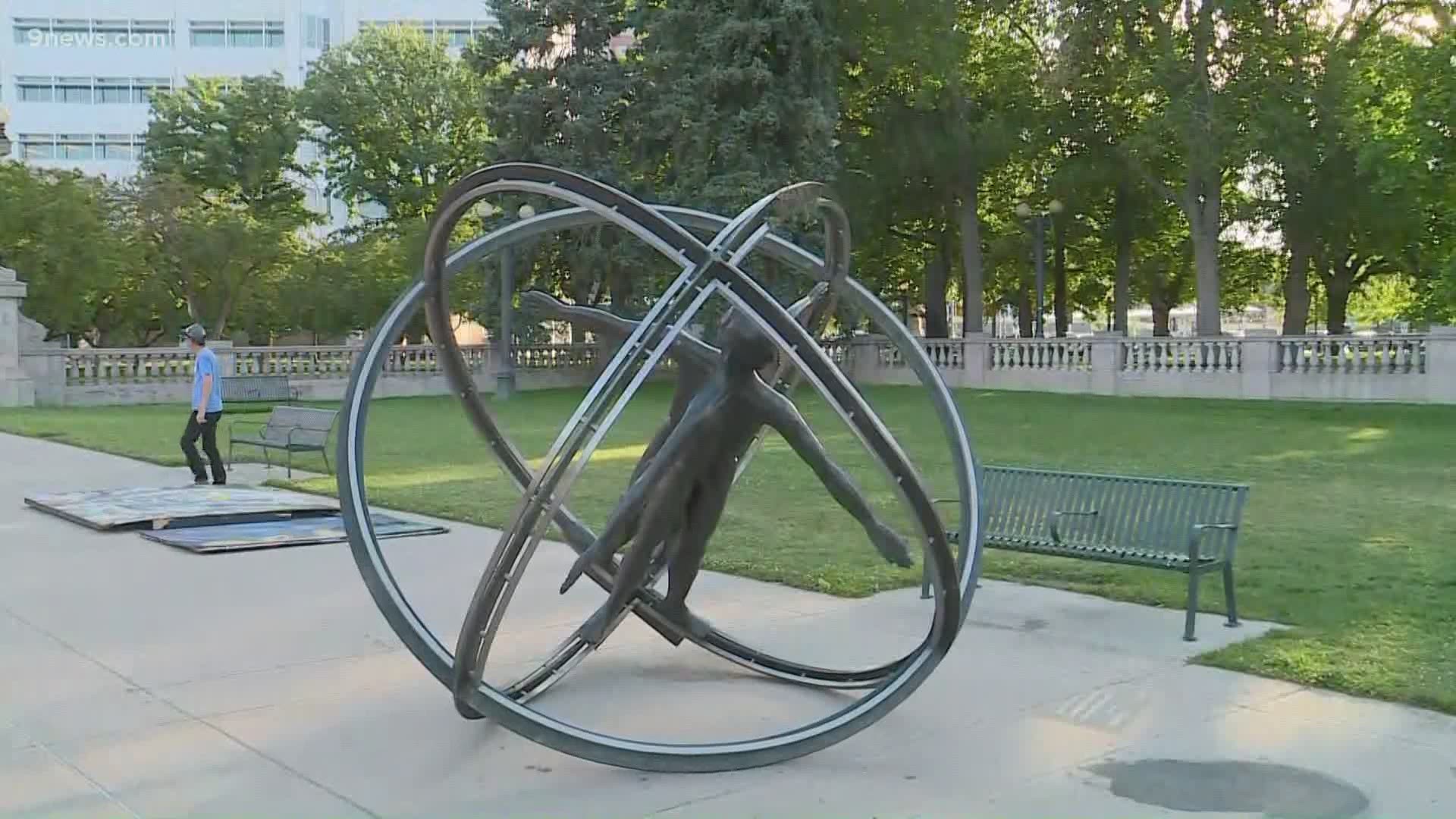 Scott Gilmore, deputy manager for Denver Parks & Recreation, said the city heard that people may have wanted to target it tonight, so they decided to proactively take it down.

Kit Carson, who lived from 1809 to 1868, was an American frontiersman, trapper, and soldier. He interacted with Native American tribes on behalf of the U.S. government and fought against the Navajo in 1863, according to the Encyclopedia Britannica. 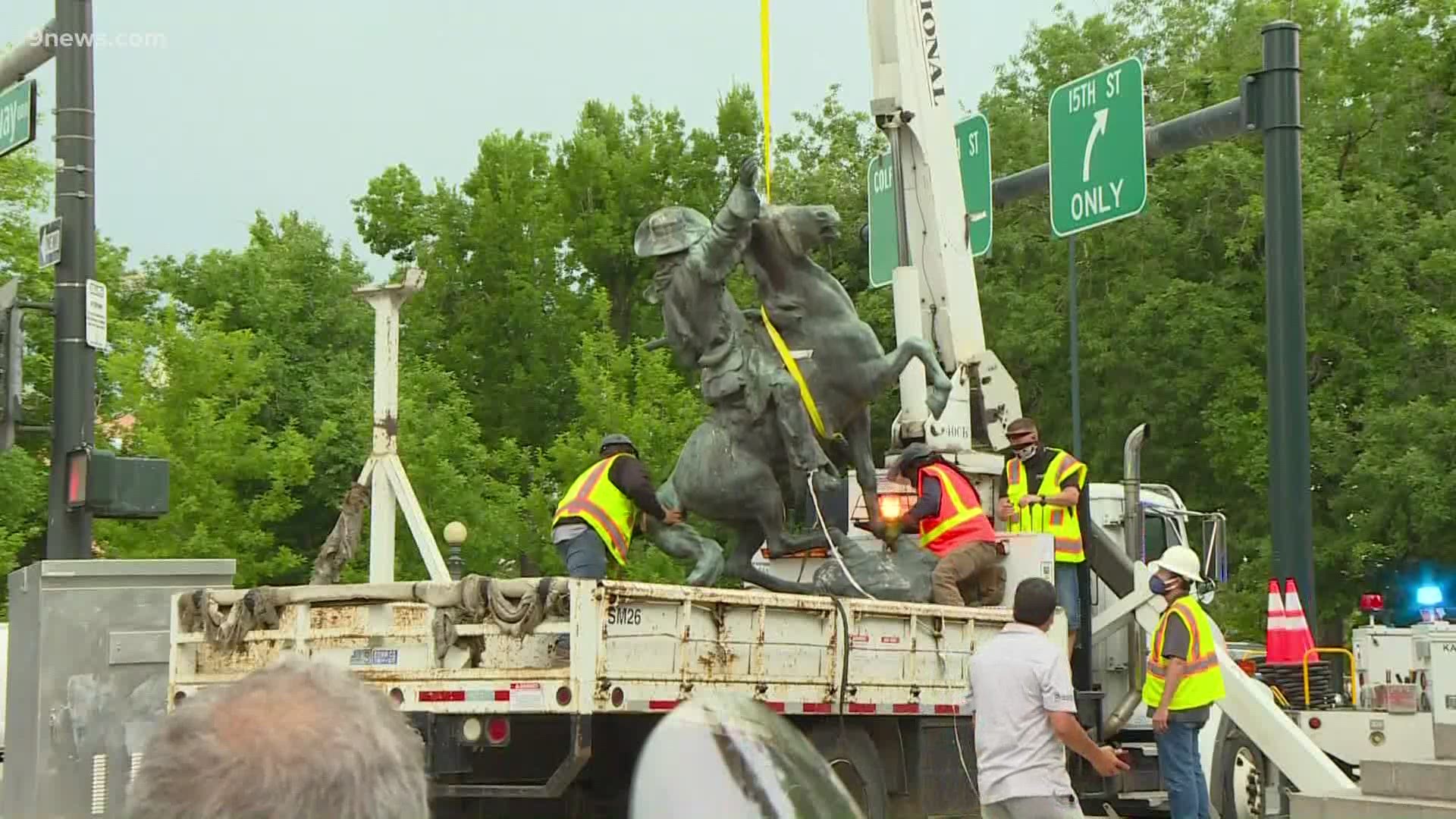 The move comes after the Christopher Columbus statue in Civic Center near the amphitheater was targeted. Video sent to 9NEWS shows a group of people pulling the Columbus statue down from its cement perch after tying ropes to it. The vandalism occurred about 11:15 p.m. Thursday, said a spokesperson for the Denver Police Department (DPD).

(WARNING: The video below contains profanity)

"I guess whoever took it down filmed it and posted it [online]," said Scott Gilmore, executive director of Denver Parks and Recreation. "It's not always the smartest thing to do, because you just filmed yourself committing a crime."

Early Thursday morning, another statue was pulled down: the Civil War monument at the state Capitol. DPD said they're working with other city agencies to identify sites and/or statues that may be targeted and will conduct extra patrols.

Both are being investigated as criminal mischief incidents and those involved could face charges, a DPD spokesperson said. So far, there have not been any arrests/citations related to either incident.

This week marked 50 years since the Columbus statue was dedicated at the park. Before it was damaged, the city said its status was under review as part of a larger effort to look at all public art within the city. The effort comes after a push to rename the Stapleton neighborhood, which was named after a former mayor who was also a member of the Klu Klux Klan.

"We are right now working with Arts and Venues to look at the history of that statue,” Mayor Michael Hancock said to reporters at a news conference Wednesday amid calls from protest leaders to remove the statue, citing Columbus’ history of devastating native populations.

As a first step, the city was considering removing the plaque commemorating Columbus, then working to rebrand the original artwork, according to Michael Chavez, public arts program director for Denver Arts and Venues.

"Times are different now," said Gillmore. "We know more of the history, the impacts of Christopher Columbus coming. And so times are changing, but back then that is something that was honored."

He noted that the statue does not actually depict Columbus but does honor him.

"Our hope was actually to bring people together, rename the statue, to put a new face on it, change the base on it honoring all people," he said. "But this takes that away. I would not want to, I would not suggest putting this back up, because no matter what we do there's going to be people that see this as Christopher Columbus, even though it's not and they will try to tear it down again."

The statue was donated to the city by an Italian immigrant named Alfred Adamo, who moved to Colorado from Italy in the early 1900s, before moving to Detroit. 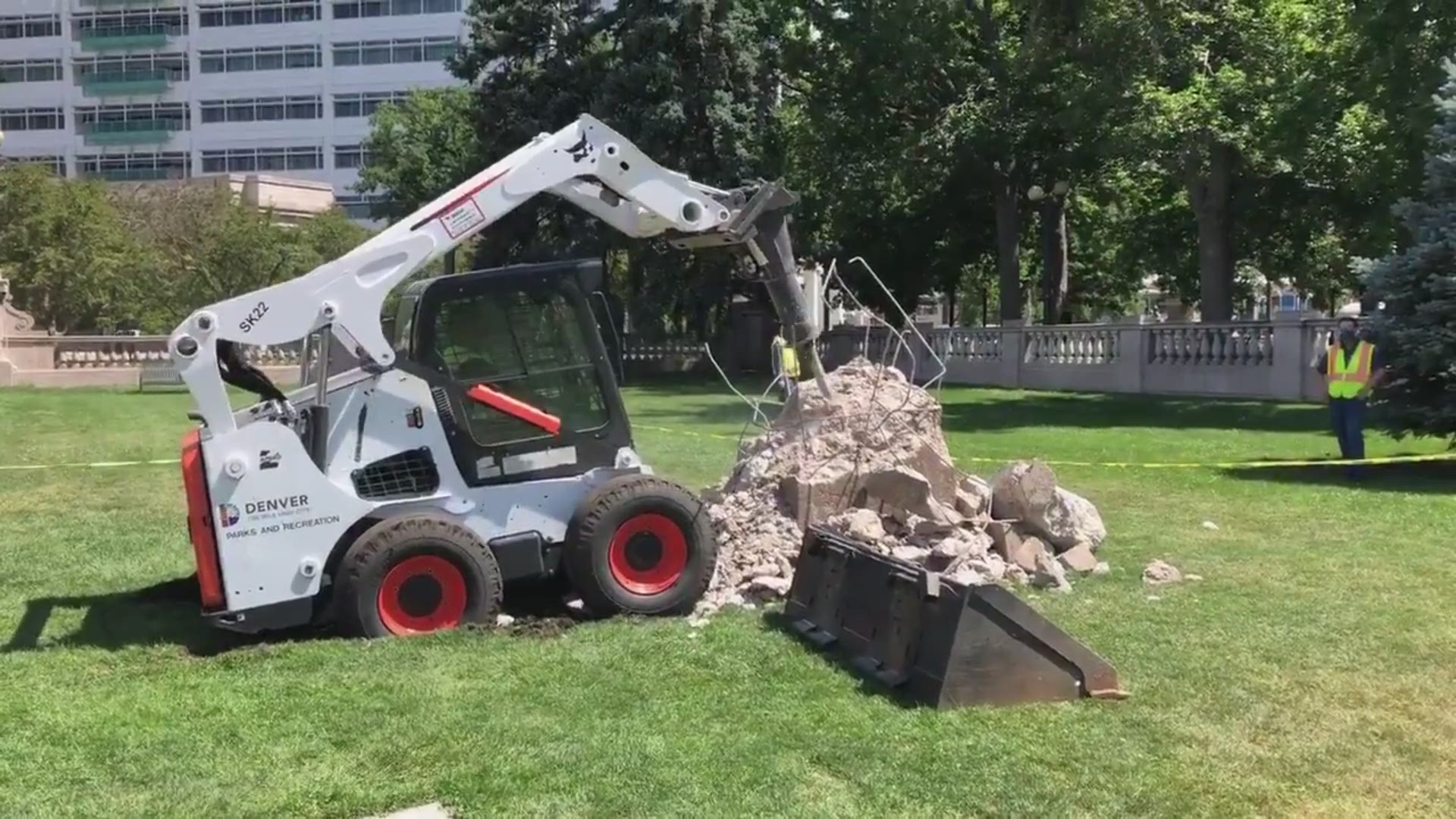 By 11 a.m. Friday, workers were already at the park removing the statue's base and were taking the statue itself to storage. Workers initially tried to remove the plaque from the concrete but had to resort to chiseling it out. That portion of the monument will likely go to Denver Arts and Venues, according to Gillmore.

"We missed a chance to bring people together, and educate people about history and challenges of this country some of the wrongs but also some of the rights. I just wish it would have ended up differently."

About 1:30 a.m. Thursday, the Civil War statue located in the west portico of the Capitol was torn down.

The statue depicts a Civil War cavalryman, dismounted with a rifle in hand. It honors the Colorado soldiers who fought and died in the Civil War, according to the state's website.

It was designed by Capt. Jack Howland, a member of the First Colorado Cavalry, and was paid for from funds by the Pioneers' Association and the State of Colorado. It was erected on July 24, 1909.

Monuments related to the Civil War have been targets for removal in recent weeks after an unarmed Black man, George Floyd, died last month after a white Minneapolis police officer kneeled on his neck for several minutes.

His death sparked outrage and protests across the country. Since then, there have been calls for the removal of Confederate flags, Civil War monuments and other public items that many view as racist.

Anyone with information or potential evidence can also remain anonymous by contacting Metro Denver Crime Stoppers at 720-913-7867. Callers could be eligible for a reward of up to $2,000.