The monument depicts a Civil War cavalryman and honors Colorado soldiers who fought and died in the Civil War, according to the city's website. 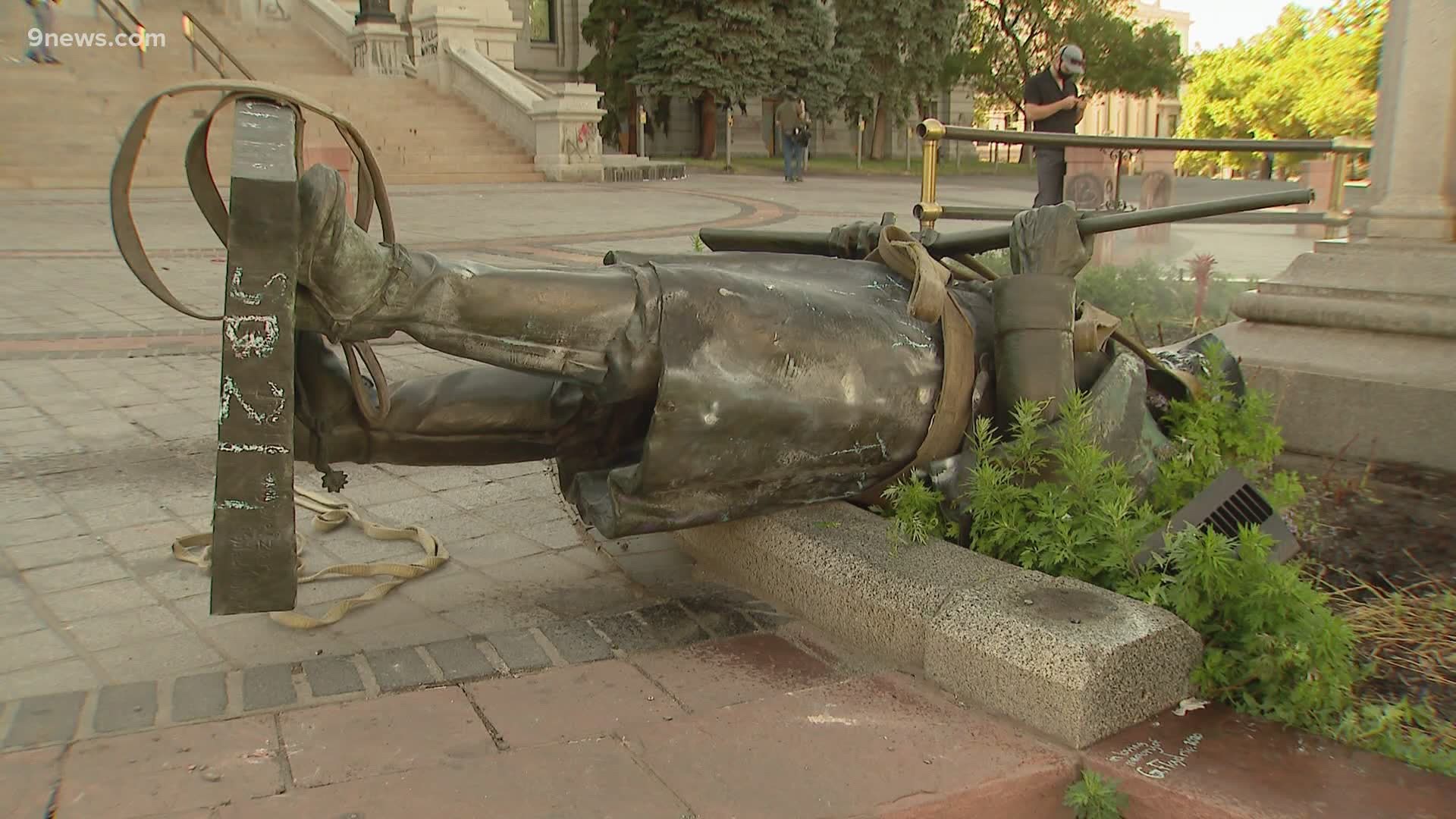 DENVER — The Civil War statue that sits in front of the Colorado State Capitol was toppled from its post overnight, according to a spokesperson for Colorado State Patrol (CSP).

The agency provides security at the capitol and said the statue was brought down around 1:30 a.m. Thursday morning. It said the Denver Police Department (DPD) was handling the investigation into the vandalism. A spokesperson for DPD said they didn't have much go on at this time, but said they were working with CSP to develop leads.

> The video above is about efforts to remove Denver's Christopher Columbus statue.

Located in the west portico, the statue depicts a Civil War cavalryman, dismounted with a rifle in hand. It honors the Colorado soldiers who fought and died in the Civil War, according to the state's website. It was designed by Captain Jack Howland, a member of the First Colorado Cavalry and was paid for from funds by the Pioneers' Association and state of Colorado. It was erected on July 24, 1909.

“I am outraged at the damage to a statue that commemorates the union heroes of the civil war who fought and lost their lives to end slavery," Governor Jared Polis (D) Colorado said in a statement. "This statue will be repaired, and we will use every tool at our disposal to work with Denver Police and to hold accountable those responsible for the damage whether they are hooligans, white supremacists, confederate sympathizers, or drunk teenagers.

The governor's also noted that the statue was originally put up to recognize Colorado soldiers who fought in all battles and characterized Sand Creek as a battle. There's now a plaque at the monument that reads:

The controversy surrounding this Civil War Monument has become a symbol of Coloradans' struggle to understand and take responsibility for our past. On November 29, 1864. Colorado's First and Third Calvary, commanded by Colonel John Chivington, attacked Chief Black Kettle's peaceful camp of Cheyenne and Arapaho Indians on the banks of Sand Creek, about 180 miles southeast of here.

In the surprise attack, soldiers killed more than 150 of the villages 500 inhabitants. Most of the victims were elderly men, women and children. Though some civilians and military personnel immediately denounced the attack as a massacre, others claimed the village was a legitimate target.

This Civil War monument, paid for from funds by the Pioneers' Association and State, was erected on July 24, 1909, to honor all Colorado Soldiers who had fought in battles in the Civil War and elsewhere. By Designating Sand Creek a battle, the monument's designers mischaracterized the actual events. Protests led by some Sand Creek descendants and others throughout the twentieth century have led to the widespread recognition of the tragedy as the Sand Creek Massacre.

> Click/tap here for more info on the statue's history.

Monuments related to the Civil War have been targets for removal in recent weeks following the death of unarmed Black man George Floyd, who died last month after a white Minneapolis Police officer kneeled on his neck for several minutes.

Credit: KUSA
Workers attempt to upright the statue that was toppled overnight on Thursday, June 25, 2020 in Denver, Colo.

His death sparked outrage and protests across the country and have helped push the Black Lives Matter movement forward. Since then, there have calls for the removal of Confederate flags, Civil War monuments and other public items that many view as racist.

In Denver, it brought forth a renewed effort to rename the Stapleton neighborhood, which is named for a former mayor who was also a member of the Ku Klux Klan. The effort had been voted down in the past.

"Not only must we create spaces where people feel accepted and respected, but we also [must] find ways to provide that opportunity for people to understand the history of certain monuments and why they existed in the first place, and why they ought to be removed or renamed,” Mayor Michael Hancock said when asked about the issue on Wednesday.