The county said people are coming to the county for outdoor recreation despite an order from the governor to do so close to home. 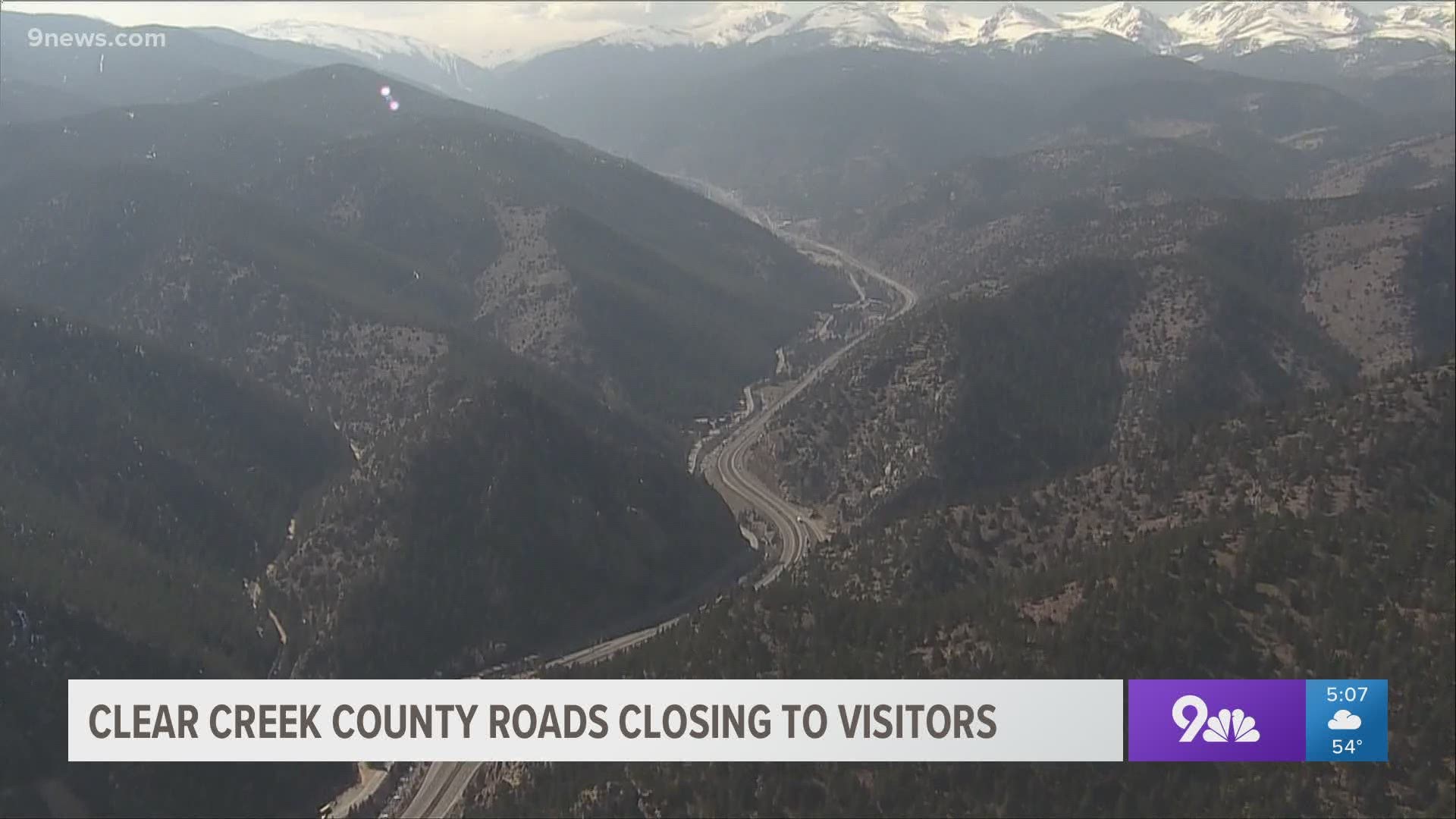 CLEAR CREEK COUNTY, Colo. — Due to an influx of visitors coming to the mountain community to recreate despite a statewide order to stay at home, Clear Creek County has closed its roads to non-residents.

“People aren’t listening to the stay-at-home orders issued by the governor of the state of Colorado,” Clear Creek County Sheriff Rick Albers said during a Zoom meeting Thursday afternoon. “They are not staying at home. They are coming up to our backyard, they are playing in our backyard.

During a two-hour-long discussion with Clear Creek County’s three commissioners, Albers cited multiple examples of overcrowding at popular area trailheads. He said a hiker had to be rescued at St. Mary’s Glacier, and that earlier this week, deputies broke up a full moon party on Loveland Pass.

Two of the county’s commissioners voted for the resolution. One was opposed.

Multiple Clear Creek County health officials said they supported the proposal, which was aimed in part at protecting first responders who might help people who get hurt while hiking or mountain biking on area trails.

In many cases, Hampson said those people claimed to have been exposed to the virus outside of Clear Creek County.

“The reason this would be a good resolution is there’s so much community spread on the Front Range,” she said.

Albers said his office has ordered signage to block certain county roads that lead to popular trailheads. Initially, he said enforcement will focus on education and warnings, but it could ramp up in the coming weeks.

“It’s not a NIMBY (not in my backyard) thing,” Commissioner Randall Wheelock said. “It’s not something we want to last forever. The only reason we’re doing this is because it’s an emergency.”

Open spaces in Jefferson and Boulder counties have also reported near-record crowds in recent weeks. While outdoor exercise is permitted under the stay-at-home order issued by Gov. Jared Polis (D-Colorado), he has since told residents to stay close to home and to avoid unnecessary travel.

Gunnison County issued a public health order barring tourists and non-residents from visiting. Chaffee County has done the same, but Clear Creek County is by far the closest community to take these measures to Colorado’s population centers.

Clear Creek County’s order does not bar residents from recreating outdoors, a concern brought up by Commissioner Sean Wood, who says they could still put first responders at risk.

“This is too drastic, this is too much of an overreach,” Wood said.

He was the sole vote against the proposal.

Clear Creek County, which is along the busy Interstate 70 corridor, is home to communities including Georgetown and Idaho Springs – which rely strongly on tourism.

The resolution only includes Clear Creek County roads. This means city roads and the US 6, US 40 and I-70 corridors will remain open.

Travel for critical businesses and government functions is still allowed for non-locals. What the resolution mainly does is bar recreational travel for non-residents of the county.

While much of the discussion centered on Floyd Hill Open Space -- which has a popular series of mountain bike trails -- this will remain open for the time-being, the commissioners said. This is despite reports that groups have congregated at the trailhead.

Floyd Hill is not off of a county road, though the trailhead's parking lot is owned by the county. The agreement at the end of the meeting was to take a wait-and-see approach about the future of the open space in the coming weeks.