Colorado Rep. Joe Neguse discusses his role in the impeachment of President Trump 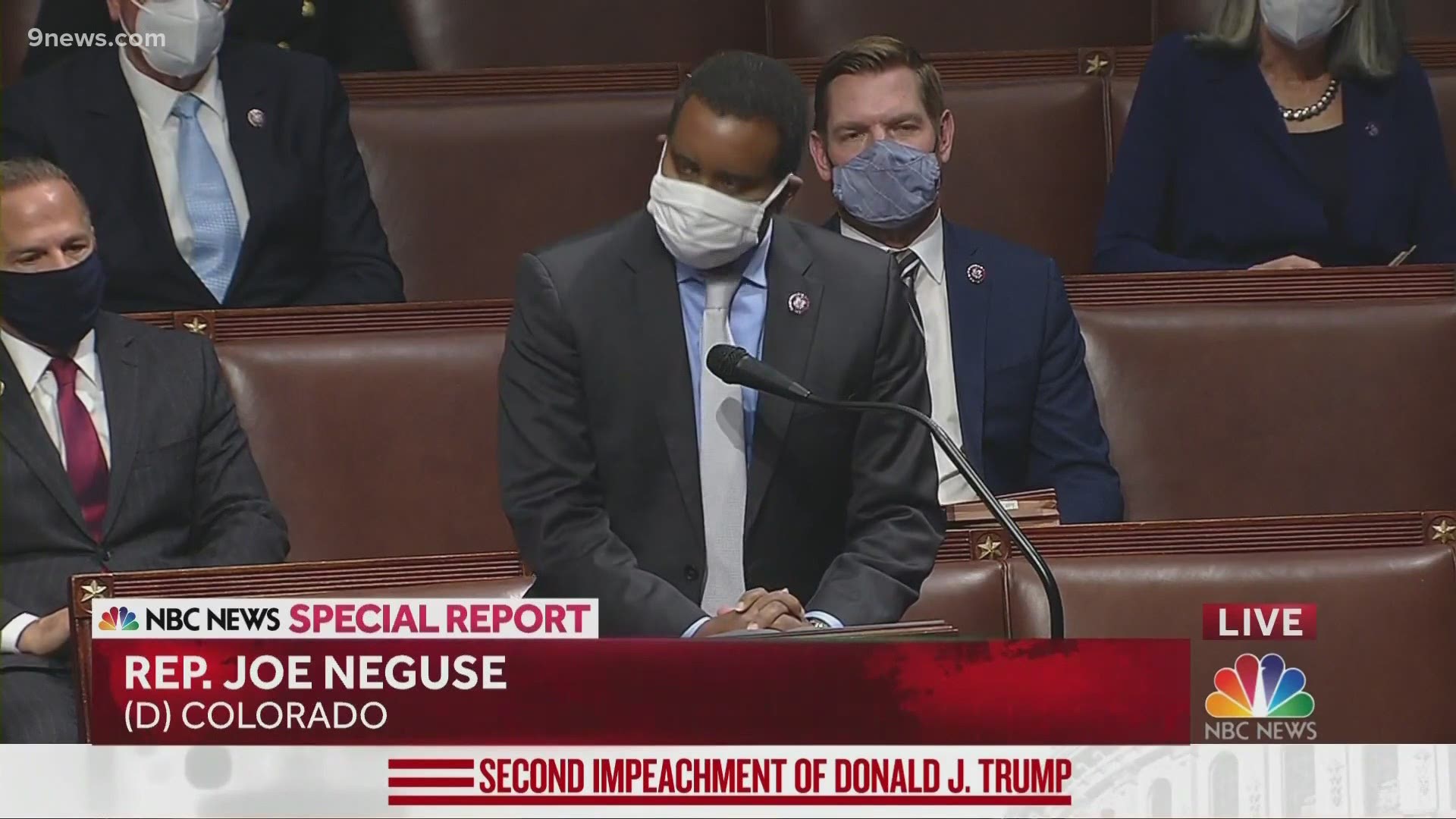 DENVER — Wednesday, 232 votes in the U.S. House of Representatives impeached President Donald Trump for a second time. Democratic Colorado Representative Joe Neguse was one of those votes.

Neguse will play a major role in President Trump's impeachment trial, as one of nine impeachment managers.

Officially, the House has voted for a second time to impeach President Trump. Were you expecting the vote to go the way it did?

Rep. Neguse: It's been a very tough, difficult week for the country and today was certainly no exception. It’s a solemn moment. Impeachment is arguably the most powerful constitutional tool available to the House. It is not something that we take lightly. Certainly, we take no joy in it. It is a solemn, solemn day.

Ultimately, the United States Congress believed that we had a duty, an obligation, to vindicate the Constitution and ultimately to respond to these terrible events that occurred just a week ago.

I'm hopeful that the Senate will approach this in a fair and objective way and that they will listen to the evidence and arguments presented. If they do so, I believe that they'll reach the conclusion that the President is no longer fit to serve and that for the good of the country, ultimately, he needs to be removed from office.

It's been one week since the insurrection at the Capitol. Do you feel safe?

Neguse: That's certainly something that I've thought about. I was on the floor of the House when this armed attack took place on our nation’s Capitol. I was evacuated from the floor. Clearly, it's something that has been top of mind for me and many of my colleagues. But, at the end of the day, the more important question, in my view, must be – has to be – are we prepared to ultimately do our duty and fulfill our constitutional oath? That to me is an easy question, and the answer has to be in the affirmative.

I'm proud of the actions that the Congress has taken to respond to this terrible tragedy and the events of the past week. It's going to be important now for the Congress to take the next step. I'm hopeful that the United States Senate will be prepared to do so.

After what you saw last week, do you have a real fear for this democracy?

Rep. Neguse: I do. Clearly the events of last week have shaken the country and have shaken the confidence of millions of Americans. It has been a trying week recovering from this terrible attack on our democracy, and yet I will also say as I said on the floor yesterday; I firmly believe our republic will endure.

Our country has gone through great trials and tribulations. We had a Civil War. We've had numerous experiences in our country's history that have tested Americans, that have tested our resolve, and on every occasion, we've risen to the task. I'm a firm believer that that will be the case yet again. That we will rise to the occasion together collectively. I'm confident that our republic will endure.

You're one of only nine impeachment managers. What does it mean to you to be appointed this responsibility?

Rep. Neguse: I am humbled that the speaker would have confidence in me to ask me to serve in this capacity. It's something I don't take lightly. It's a duty of the highest constitutional order in the House.

I'm certainly going to be preparing quite a bit and getting ready for the trial in the coming weeks, hopefully.

Senate Majority Leader McConnell said that he will not agree to reconvene the Senate before the Jan. 19. What can realistically happen next with this impeachment?

Rep. Neguse: It's important for us to all remember how we got here, what brought us here – an armed insurrection on our nation's Capitol literally seven days ago. Five people died. One police officer.

In my view, and the view ultimately of a bipartisan majority in Congress, Republicans and Democrats, it is clear that this President has no interest in ensuring the peaceful transfer of power. Given that fact, the House believes, as we charged in our impeachment article, that he must be removed. I ultimately believe that as long as he is in office, his conduct constitutes a direct threat to the ability to have that peaceful transfer of power occur.

In terms of the timing of the processes over in the Senate? That's going to be up to the Senate. The House had a job to do, which we did.

But, whenever they decide that this whole process will commence, I can certainly promise the people of Colorado that we will be ready, and we will have our case ready to present.

But can an impeachment trial continue to go forward even after President Trump is no longer president?

Rep. Neguse: I have not heard any updates with respect to timing. But, make no mistake, the House has issued its indictment. That indictment now, as a matter of constitutional process, must be tried in the United States Senate. So, my hope would be that we could do that as soon as possible.

Urgency is something that we all have emphasized, but as to when it ultimately starts – that remains an open question.

RELATED: Bennet says there may not be enough time to impeach Trump before his term ends