Erin McIntyre and Mike Wiggins are the new faces of small town community journalism, running the second-oldest newspaper on the Western Slope in Ouray, Colorado. 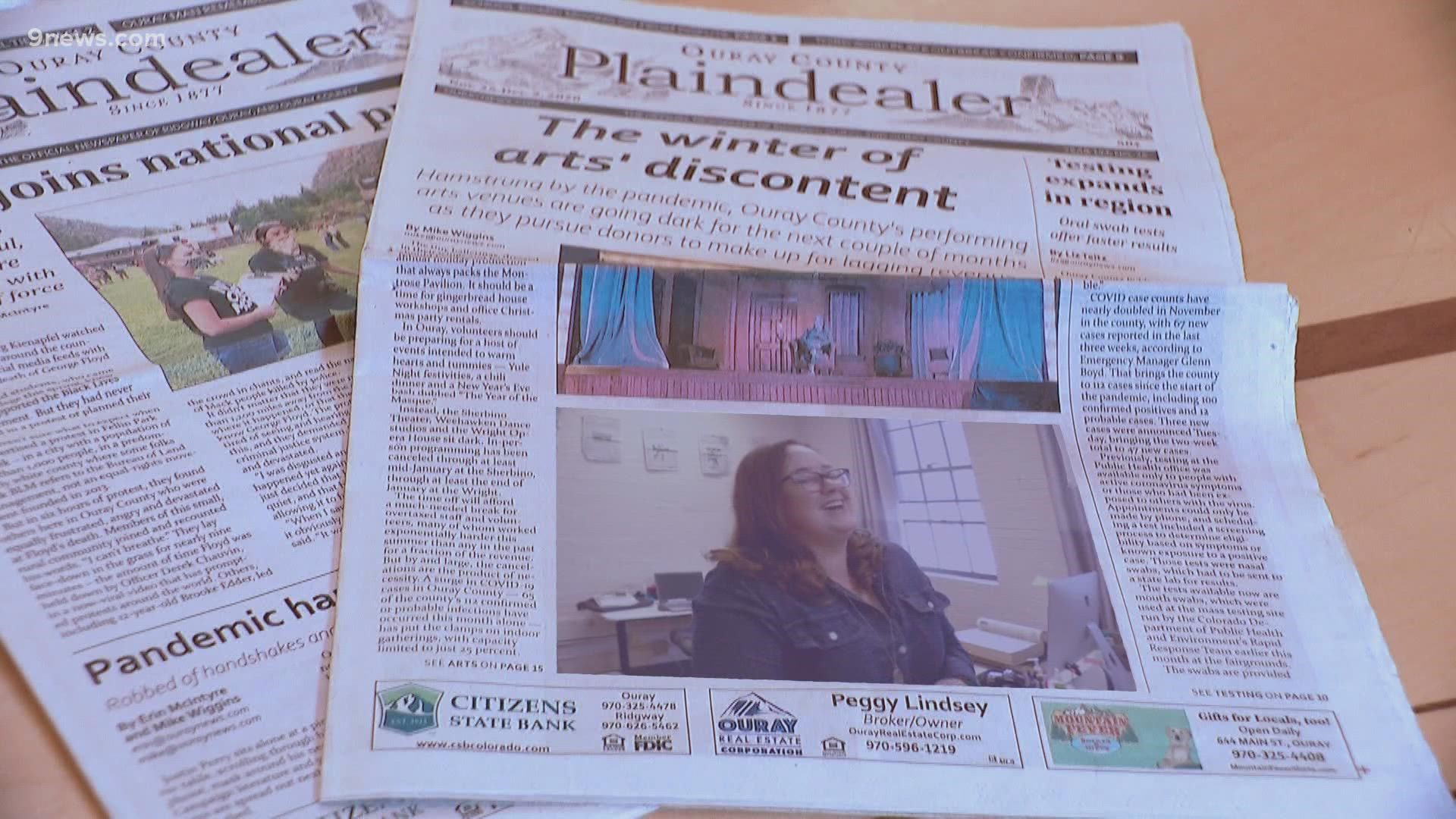 OURAY, Colo. — Almost any journalist will tell you they’d love to quit and open their own TV station, radio station or newspaper.

Two journalists from the Western Slope actually did it.

Erin McIntyre and Mike Wiggins both worked for the Grand Junction Daily Sentinel for years. McIntyre was an investigative reporter and columnist for that paper. Wiggins was the managing editor. They’re also married.

In 2019, they decided to call it quits and move. They thought about moving to a bigger city and trying to find journalism jobs there. Then they started searching for newspapers for sale in smaller towns.

They found the Ouray County Plaindealer.

“Just because Ouray County is a place that has fewer than 5,000 people living in it, many of them part-time residents, and it’s a rural place, doesn’t mean the residents have any less of a right to know what’s going on with their government, with their taxpayer money,” McIntyre said.

“They need a watchdog. We take that role really seriously here, and since we started here at the Plaindealer two years ago, I think our reporting has really spoken for itself,” she said.

In their two years at the paper, McIntyre and Wiggins have helped uncover a lot of previously unreported material.

They discovered the county sheriff had DUI charges on his record that were never disclosed. They reported on an incident where the sheriff called local police on his girlfriend while at a conference in Loveland on the taxpayers’ dime. It led to a recall election.

“Our sheriff was removed from office with more than 93% of the voters ousting him after our reporting,” McIntyre said.

Their reporting also discovered county workers were being punished for working too hard during the COVID-19 pandemic.

“We’ve had many readers contact us and say thank you for making sure they knew what they needed to know to make a good decision,” she said.

But it’s not an easy task. On top of the serious reporting both are doing, they’re also trying to run a small business.

“It is hard,” Wiggins said. “It is time consuming. It is the hardest I’ve ever worked.”

The result is even more content, which makes it easier to sell the newspaper.

“I think we saw potential here and we knew this was an engaged community, a community that valued its newspaper, but we thought we could do more with it," he said.

Journalists are used to getting feedback about their stories. But for the Plaindealer, most of the feedback tends to be positive. In fact, they have an entire wall in the office devoted to nice cards and messages they’ve received.

“The number of phone calls and emails and in-person compliments that we receive, frankly, is humbling, but it also reassures us that we’re doing good work,” Wiggins said.

If you’re looking to support their work, you can always subscribe to the paper. You can also help by donating to an upcoming fundraiser.

The Colorado Media Project is offering a $5,000 matching grant to 26 small newsrooms throughout the state who can raise that much through a campaign called #newsCOneeds. Click here to support the Ouray County Plaindealer.

The paper is also raising funds to keep its one full-time reporter through the Report For America campaign. Donations are tax deductible.