Denver and Aurora among the top 20 cities, according to website tracking data since 2013. 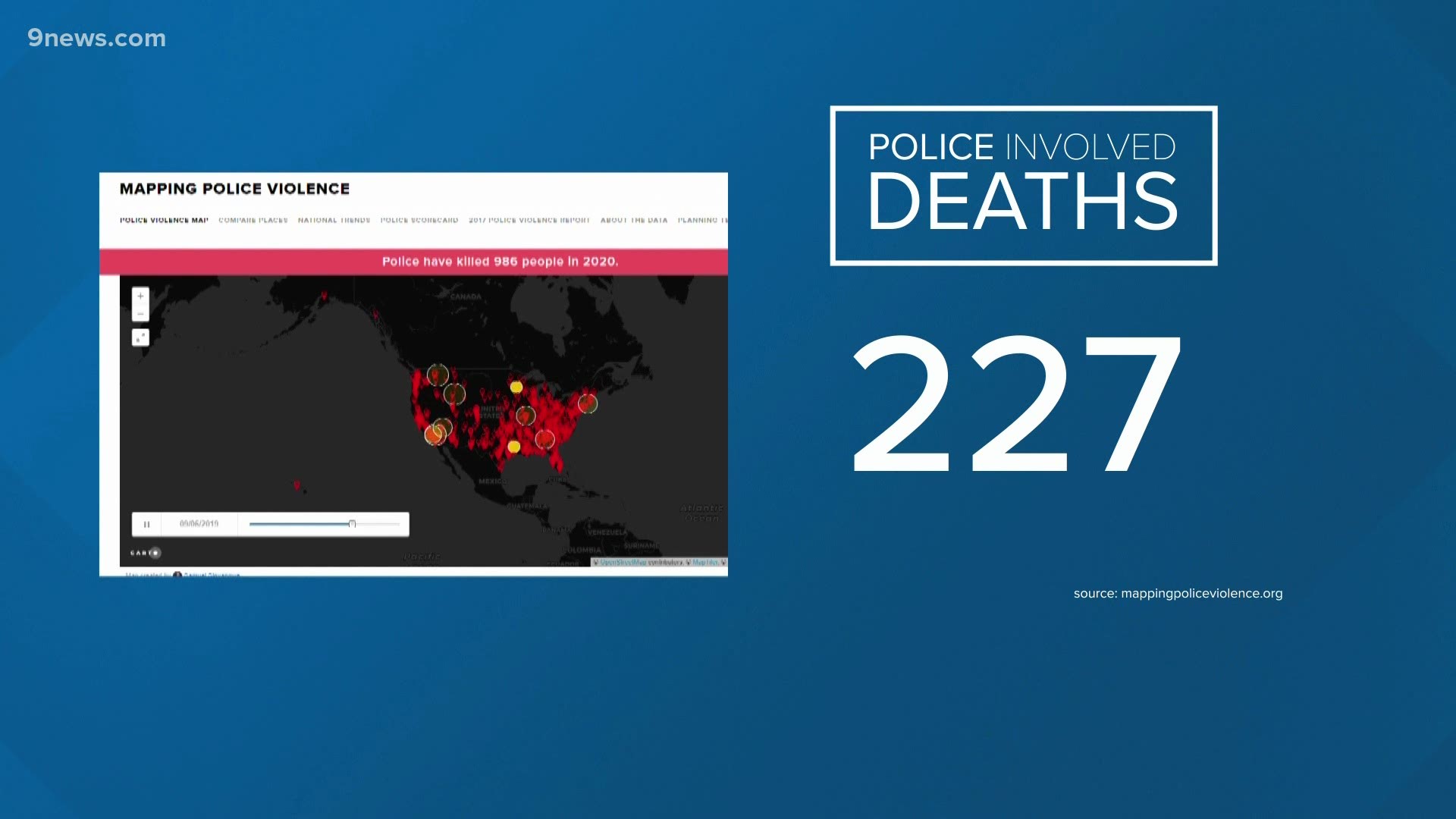 COLORADO, USA — The death of Elijah McClain at the hands of Aurora Police last year sparked numerous, and sometimes violent, demonstrations throughout the Denver area.

It also contributed to the national conversation about police brutality. As a result, the name Elijah McLain can now often be heard shouted in the same sentence as George Floyd, Michael Brown and Eric Garner.

> The video above originally aired on Nov. 9, since 2010, at least 107 people across the U.S. have died in police custody while being held prone.

But while McLain’s death was clearly the most prominent police-involved death in recent years here in Colorado, it was, by no means, the only one.

In fact, according to mappingpoliceviolence.org, a website run by a data scientist from New York city who claims to have developed the most thoroughly sourced database of its kind, there were 227 police-involved deaths in Colorado from 2013 to 2019, an average of more than 30 per year.

That ranked the state as the sixth highest per capita rate for police-involved deaths in the country. Among the nation's 100 largest cities, Aurora had the eighth-highest rate, Denver the 16th highest.

Diving into the specifics of the data, it shows that Colorado also has the        13th-highest total number of police-involved deaths involving unarmed people between 2013 and 2020.

Mari Newman, the lawyer for Elijah McLain’s family, said the numbers, which she called "an outrageous abuse of authority," were driven by several factors.

"Failures of training, inability of officers to de-escalate normal situations, and implicit bias, or explicit bias and racism among our law enforcement officers here in Colorado," Newsman said. "These are things that need to change immediately."

State representative Leslie Herod, a leading voice in the call for police reform in Colorado, also pointed to a lack of proper training as one of the reasons behind the state’s high rate of police-involved deaths.

"We actually see that there’s a much more likely correlation with bad outcomes when law enforcement is not trained accurately and when there’s not community-based resources for mental health and substance abuse challenges," Herod said. "Interaction with law enforcement should not be a death sentence."

But Paul Taylor, a criminal justice professor at CU Denver, said right now there are simply no convincing explanations for why Colorado’s rate of police-involved deaths is so high. He said Colorado's rate is alarming, especially when compared to the state’s crime rate.

Despite a recent surge of violent crime in Denver, Colorado’s overall violent crime rate remains relatively low -- only 28th highest among the 50 states from 2013 to 2019.

"We really need to do a better job of digging into these events and truly understanding why they occur and what can be done to prevent them," Taylor said. "The data collection effort and the research around police use of data force is abhorrent."

Denver Police Chief Paul Pazen said that there needs to be a much deeper dive into the numbers in order to determine what's causing them. Pazen said reducing police-involved deaths is among his highest priorities and, to that end, he has made a number of moves over the past few years to reduce the number of people killed by police.  He points, in particular, to several changes to DPD's use of force and body-worn camera policies that were implemented earlier this year.

"I think it’s incumbent upon law enforcement leaders to take a hard look at this data set in order to reduce the high levels of use of force," Pazen said.

Unfortunately, right now those high levels show no sign of going down, at least not in Denver.  Last year, there were six police-involved deaths involving DPD officers; so far this year, there have been nine.