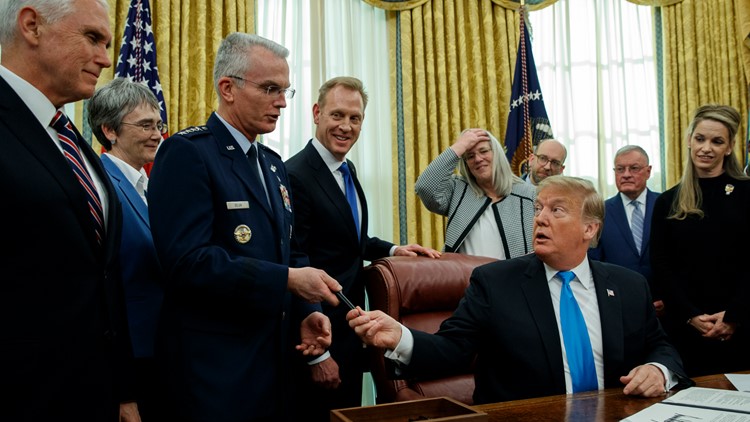 COLORADO SPRINGS, Colo. — The initial headquarters for the Pentagon's new Space Command will be at Peterson Air Force Base, Colorado, a congressman said Wednesday.

The command will officially start operations next month at the base in Colorado Springs, said Rep. Doug Lamborn, a Colorado Republican.

The Defense Department has not yet announced the command's permanent home.

It was established amid growing concerns that China and Russia are working on ways to disrupt or destroy U.S. satellites.

Space Command will draw elements from across the services. It will have the same status as other headquarters such as U.S. Cyber Command, Special Operations Command and Strategic Command.

Lamborn said he hopes the Pentagon chooses Peterson for Space Command's permanent headquarters because several space operations are already based in the Colorado Springs area.

They include the 50th Space Wing, which operates more than 185 military satellites; the 21st Space Wing, which provides missile warnings; the North American Aerospace Defense Command or NORAD; and the famous underground bunker in Cheyenne Mountain.

"The infrastructure and the warfighters are already here," Lamborn said.

The Pentagon had a U.S. Space Command from 1985 to 2002, but it was disbanded in the aftermath of the 9/11 terrorist attacks so that U.S. Northern Command could be established, focusing on homeland defense.

The Air Force still kept its own Space Command, which has its headquarters at Peterson. Northern Command is also based at Peterson.

The Colorado Springs area is also home to the U.S. Air Force Academy and Fort Carson, which has infantry, helicopter and Stryker vehicle units.