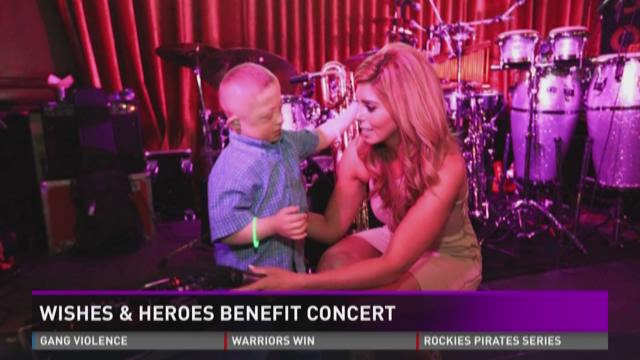 He was her hero and a hero to many others. He was a paratrooper in the Air Force and then a firefighter for the Los Angeles City Fire Department for 32 years. He passed away from a rare form of leukemia in 2010, a cancer that doctors said was a line of duty cancer.

Now in its 7th year, the Corey Rose Wishes and Heroes Benefit Concert at the Hard Rock Cafe Denver raises money for Make A Wish Colorado and the Colorado Professional Fire Fighters Foundation.

Every year, one Colorado child fighting leukemia or lymphoma is chosen and the concert raises money to grant their wish through the Make A Wish Foundation.

Corey also serves on the CPFFF board which is an organization that raises money for local firefighters and their family members when tragedy strikes, many times it's when firefighters are diagnosed with cancer (often times related to the job). All of the proceeds go to the two foundations (50/50).

Once again this year, 9NEWS is a sponsor and has given a $5,000 matching gift for all money raised online: https://www.youcaring.com/makeawishcoloradoprofessionalfirefightersfoundation-827546

Tickets are $20 in advance, $25 at the door: http://www.ticketweb.com/t3/sale/SaleEventDetail?dispatch=loadSelectionData&eventId=7401755