A group was still marching in Dallas at 10 p.m. 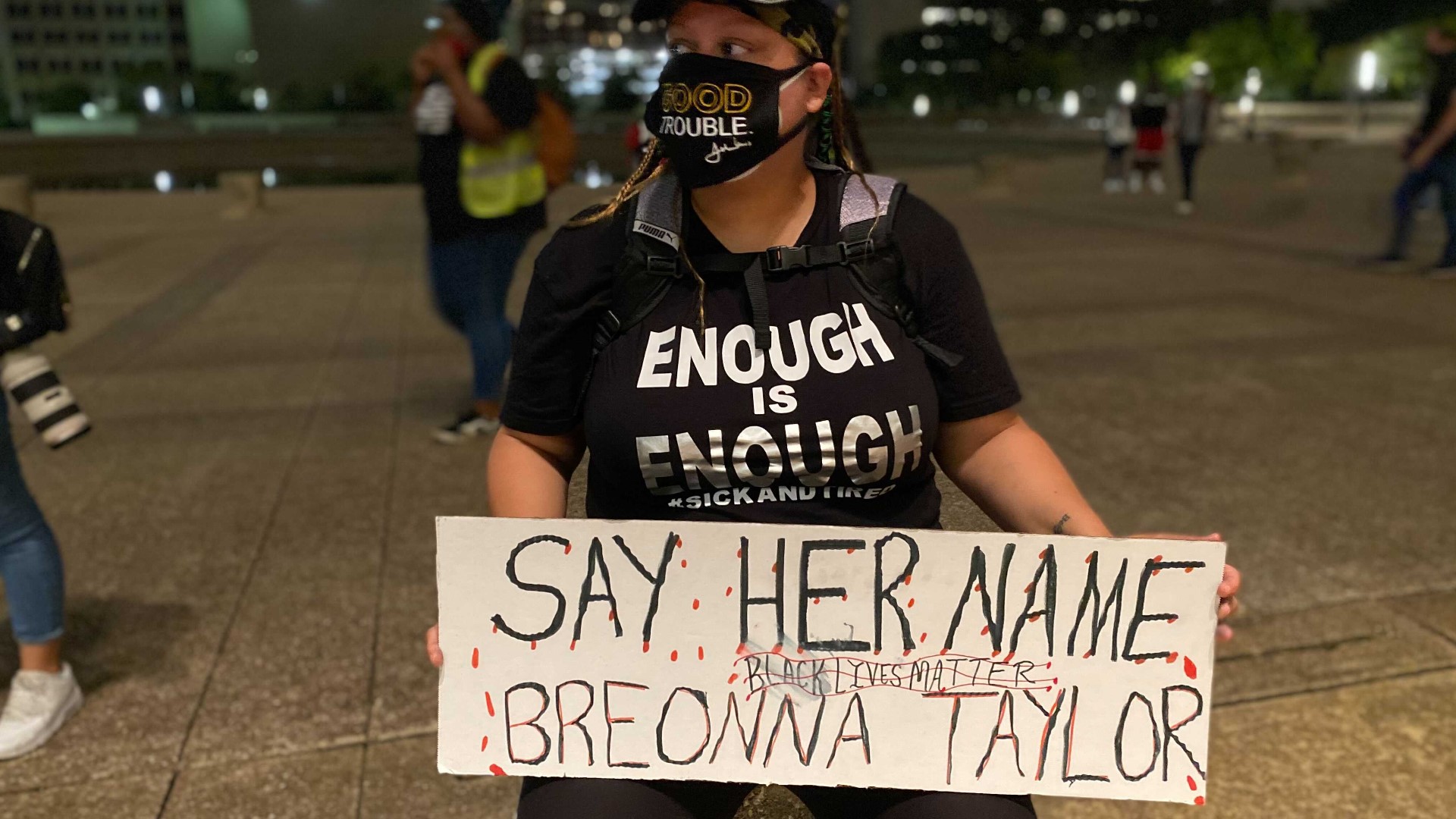 Protests occurred in cities across the country, including in Dallas and Fort Worth, Wednesday after a Kentucky grand jury announced charges against a former police officer in the raid that killed Breonna Taylor. The charges were not for her death.

A protest started at 6:30 p.m. at the courthouse in Fort Worth.

The crowds in Fort Worth made a few loops around downtown, but were mostly dispersed by 9 p.m.

In Dallas, crowds were still marching as of 10:30 p.m., with one group going from police headquarters to City Hall, where council members were inside debating the city's budget.

They were moving toward Elm Street downtown around 10 p.m.

Protesters are moving down Elm downtown.

In Louisville, protests were underway and the police department spokesperson said at least one officer was shot.

Protests for Breonna Taylor in Dallas

The grand jury recommended three counts of first-degree wanton endangerment for former Louisville police officer Brett Hankison. The charges were for firing into the apartments of Taylor's neighbors, according to the grand jury.

RELATED: Grand jury indicts Brett Hankison in Breonna Taylor case, but no charges in her death

Taylor was shot and killed in her home on March 13 when Louisville Metro police officers served a search warrant related to a narcotics investigation.

There was no bodycam footage from the night, with the attorney general saying his office pieced the investigation together through the ballistics report and interviews.

The three officers identified in the investigation were Brett Hankison, Sgt. Jonathan Mattingly and Det. Myles Cosgrove. All were placed on administrative reassignment following the shooting. Hankison has since been fired for his actions the night of Taylor's death.

It’s a small number of them.

A few are armed with shields and pepper spray. pic.twitter.com/YniR4S8Zcv

Protesters have gathered outside Dallas city hall after going down into the lower parking garage.

Council members are inside debating and preparing to vote on the city budget tonight.

They recessed after protesters gathered in the garage. pic.twitter.com/YBbGB4ktWU

Numerous Black women are taking turns speaking outside of @DallasPD.

Demonstrators have gathered outside @DallasPD headquarters to protest on behalf of #BreonnaTaylor.

Another protest is happening at city hall a few blocks away. pic.twitter.com/nuTgzjydmQ

Protesters in Fort Worth have made a couple loops around downtown. Now, they are back at the courthouse on Weatherford St. Down to a few dozen people, but there were around 75 earlier. (@wfaa) pic.twitter.com/K4bNi5RdBG