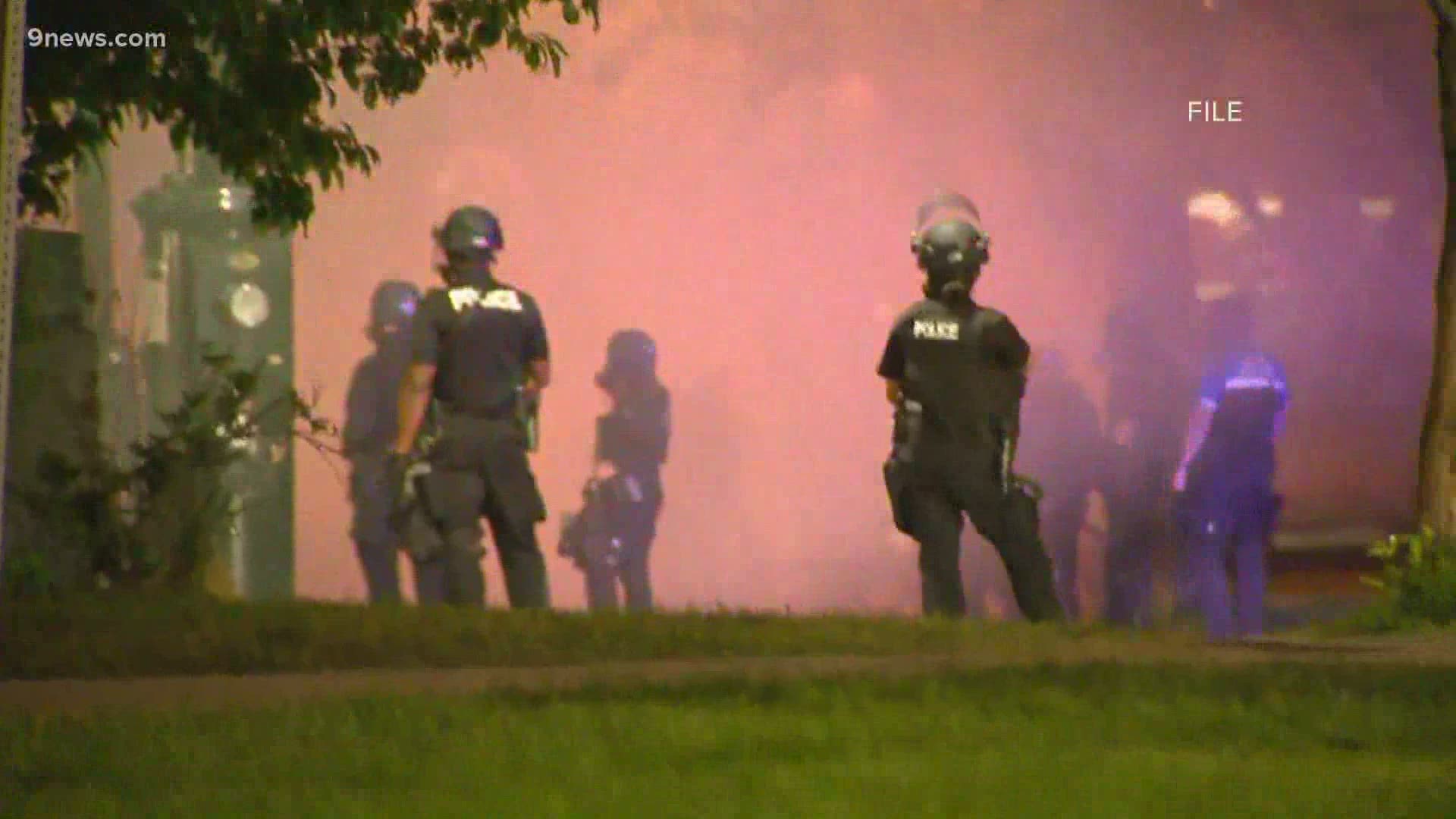 DENVER — Two Denver Police Department (DPD) officers were suspended for several days each for violating the department's policy regarding the use of "chemical agents and munitions" during protests in Denver last summer over the death of George Floyd in Minnesota, disciplinary records show.

Officer Derek Streeter was disciplined as a result of his actions during a protest on May 29 and was suspended for 10 days.

Officer Diego Archuleta was disciplined for actions during a separate protest that began on May 31 and stretched into the early hours of June 1, the records show. He's been ordered to serve a six-day suspension.

On the evening of May 29 and into the early morning hours of May 30, body camera footage showed Streeter deploying pepper balls, the report says.

In one instance, Streeter was seen firing three pepper balls in the direction of a vehicle where a passenger was hanging out a window and yelling obscenities, the document says.

When asked about the incident, Streeter explained that he thought the man was "positioning himself to throw something at us," the report says.

Streeter was asked whether he still thought the man was a threat, given the now greater distance between them.

He replied, "yes" and said that over the course of the previous few hours, crowd members had used sling shots and lacrosse sticks to launch projectiles from a farther distance away, the document says.

While the report acknowledged that Streeter and his fellow officers had been hit and injured by projectiles, his explanation for deploying the pepper balls was "not plausible."

Prior to the incident described above, the report says, Streeter fired a single pepper shot at two young men following a short exchange of words, where the man said he "didn't do anything" and asked where he should go in response to the officer's commands to "go home."

Neither of the men were hit, the report states.

In this instance, the report found that the men were moving away from the protest activity when Streeter fired toward them. It also found that there was no evidence from body camera footage to support that the men posed a threat.

The discipline report also found that Streeter violated policy when he fired pepper balls at a woman who had yelled obscenities at officers while running away from the protest area.

He will service his suspension in two parts, the first beginning June 6 and the second July 11. He has 10 days to appeal to the Civil Service Commission.

Footage from a body worn camera from a DPD sergeant showed a woman in a small SUV expressing "contempt at officers' actions," according to the discipline report. Several officers ignored her or asked her to "move along," but according to the report, traffic was stalled on Logan Street due to the protests and she had nowhere to go.

As Archuleta neared the driver's side front tire of the SUV, the woman yelled, "What they gonna kill this guy?', the report says. He then turned and "sprayed his OC fogger twice" at the vehicle's windshield, the document states. Immediately afterward, he walked away, the report says.

During an interview with Internal Affairs in November 2020, Archuleta said he "made a mistake" when asked why he deployed the fogger toward the windshield.

He said during the chief's hearing on the case that he "immediately realized" his "poor decision" and "regretted" placing the department in a bad light. Archuleta also expressed that he wished to "personally apologize" to the woman.

He is set to serve his suspension beginning May 23 but can appeal to the Civil Service Commission.

DPD had come under fire following the protest last year for its use of less-lethal force and has faced lawsuits from protesters who claimed they were seriously injured as a result.

As a result of the lawsuits and complaints, the Denver's Citizen Oversight Board conducted an investigation and recommended that the department enact 16 changes, including banning the use of rubber-ball grenades for crowd control and mandating body camera use at protests.