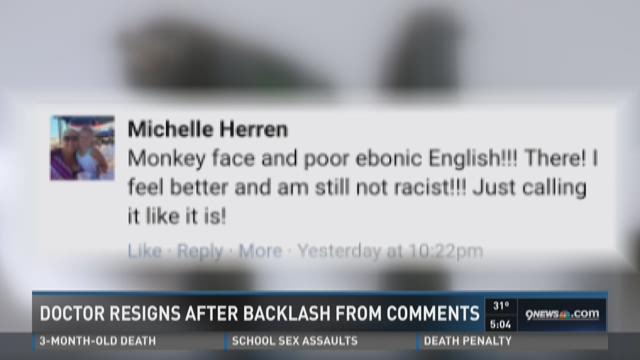 "As of December 2, Michelle Herren, MD, and Denver Health have mutually agreed that Dr. Herren will voluntarily resign her employment from Denver Health after a ten year career of providing care to its patients," the hospital said in a statement.

“We are beginning the process to terminate Dr. Herren’s faculty appointment," University of Colorado School of Medicine Dean John J. Reilly, Jr., said in a statement. "She has expressed values that are at odds with ours and she has compromised her ability to meet the teaching and patient care missions of the School of Medicine.”

Social media lit up Thursday after the story broke.

In response to another Facebook user’s praise of Obama, Dr. Michelle Herren wrote: “Monkey face and poor ebonic English!!! There! I feel better and am still not racist!!! Just calling it like it is!”

Two minutes later she posted an unflattering photo of the First Lady yelling with the comment: “Doesn’t seem to be speaking too eloquently here, thank god we cant hear her! Harvard??? That’s a place for ‘entitled’ folks said all the liberals!”

Denver Health had initially responded to the posts on Facebook saying that until further notice, Herren “will not be seeing patients or providing anesthesia services at Denver Health Medical Center.”

JoAnn Nieto saw the post on a friend’s Facebook feed and shared with news outlets. She also contacted the CU Board of Regents as Dr. Herren held a non-paid faculty appointment at the University of Colorado, as do many Denver Health physicians.

“I find in absolutely appalling that she is working at a public institution as well as with many many children who are minorities,” Nieto said in a letter to one board member. “This is completely unacceptable and I sincerely hope that corrective action is taken. I sincerely hope she is relieved of her duties as both a teacher and a practitioner.”

The board member responded by saying the Facebook comments “are repugnant and contrary to the University of Colorado’s commitment to diversity and inclusion.”

The member explained to Nieto that Herren is not an actual University of Colorado employee.

This is Denver Health’s full statement:

“Denver Health is deeply disappointed by the remarks posted on social media by Dr. Michelle Herren against the First Lady of the United States. We are offended by the comments made by this individual, who was acting independently in her private capacity. Her views are contrary to the mission and values of Denver Health, and to our staff and patients. Denver Health proudly serves people of all races, genders, sexual orientations, and social backgrounds – and our staff and patient population truly reflect our diverse community and nation. We are reaching out to all of our patients, employees and physicians to reinforce our culture, mission and beliefs that all individuals regardless of their race, religion, ethnicity, gender or sexual orientation are deserving of dignity and respect.”