Protests sparked by the in-custody death of George Floyd in Minnesota continue in Colorado for the 11th straight day. 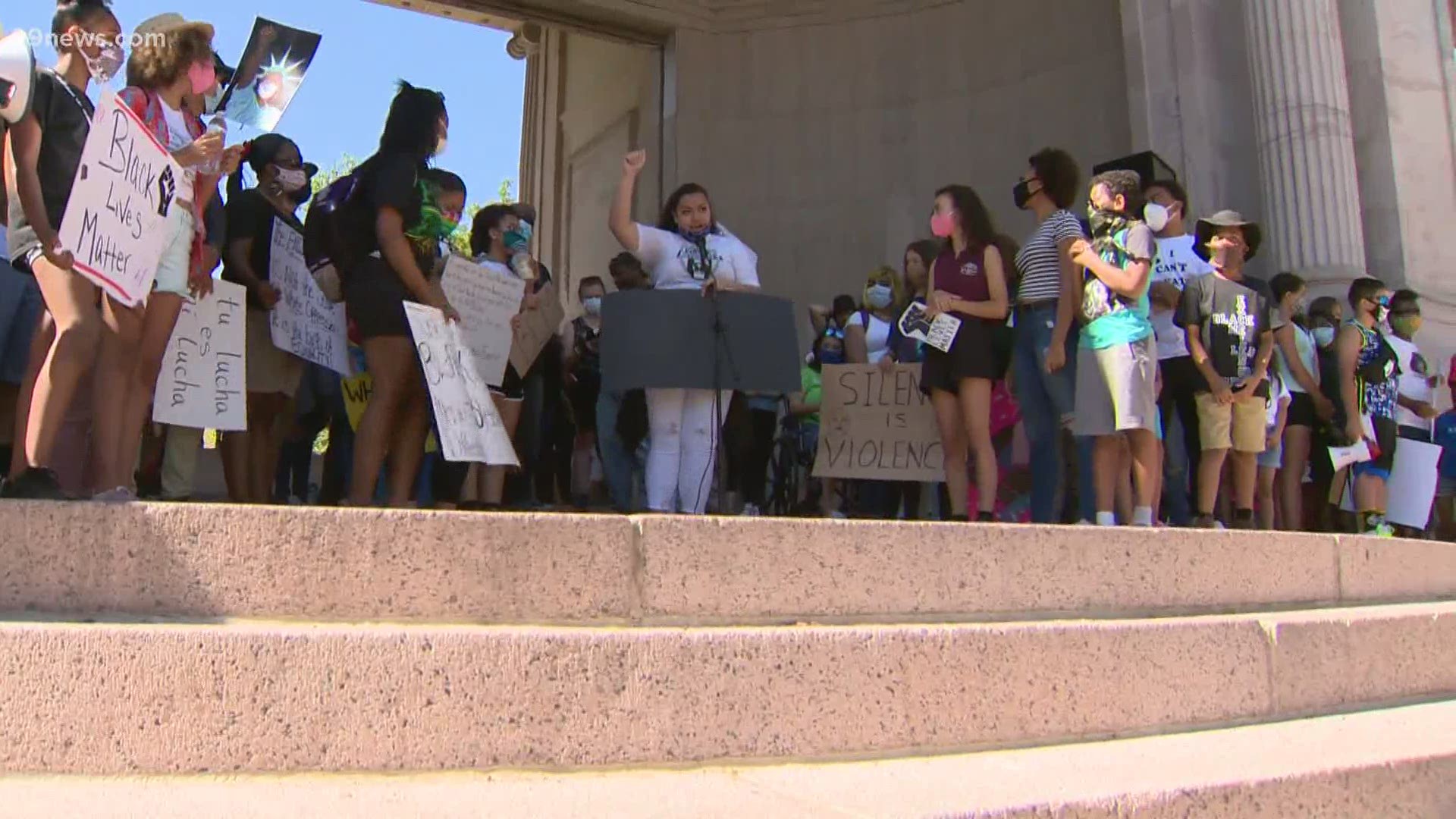 DENVER — Protests sparked by the in-custody death of George Floyd are taking place in Denver for the 11th straight day.

At 10:30 a.m., the crowd left Civic Center and began marching down Colfax Avenue.

The march reached the intersection of Colfax Avenue and Ogden Avenue around 11 a.m., and about 40 minutes later they were marching past East High School.

> 9NEWS will stream live aerials throughout the day on the 9NEWS website, YouTube and the 9NEWS app.

The march comes two days after Denver Board of Education members formally proposed ending the district's contract with the Denver Police Department (DPD).

If the proposal is approved, it would remove all DPD officers currently assigned to DPS schools.

"We want to make sure all students in all of our schools, especially our students of color, feel safe and protected," said school board member Tay Anderson, who is spearheading the proposal.

Anderson and Jennifer Bacon, DPS school board vice president, introduced a resolution Friday morning on the steps of West High School to end the district's contract with the DPD. If the board approves, it would remove DPD officers from schools in Colorado's largest school district. It would be a change to a system of policing that many feel targets students of color.

Members of the Broncos organization led one of many demonstrations in Denver and the rest of the state on Saturday.

About 50 players, all 24 coaches, and team executives led a rally at Civic Center that drew thousands.

Many Broncos address the crowd including outside linebacker Jeremiah Attaochu, who came to the United States from Nigeria when he was 8 years old. He spoke about the school systems in this country and the need for policy changes.

”You can’t keep putting a Band-Aid on an old wound,’’ Attaochu said to the crowd. “Overt police brutality, hate, racism, that is all built by the system and the younger generation is tired of it. We want some real healing. We need to heal as a country.’’

Justin Simmons, Davontae Harris, Alexander Johnson, De’Vante Bausby and Von Miller were the other Broncos players who spoke to the large gathering before leading a march through downtown Denver.

Saturday marked the first full day that a temporary restraining order issued by a federal judge in Colorado limiting DPD's use of less-lethal force on protesters.

The order came after a class-action complaint filed Thursday in Denver District Court that claims DPD cannot be trusted with the use of less-lethal weapons against protesters and that its officers use them without regard to the constitutional rights of protesters and bystanders.

The City and County of Denver filed motion late Friday says that it's not feasible to require a supervisor with the rank of captain or above to authorize such use of force because DPD has only four officers of high enough rank in the downtown area. The motion requests that lieutenants also be allowed to make that call. Jackson granted that request Saturday.