The community organization Black Lives Matter 5280 said a woman came forward alleging that Anderson "is the perpetrator of her sexual assault." 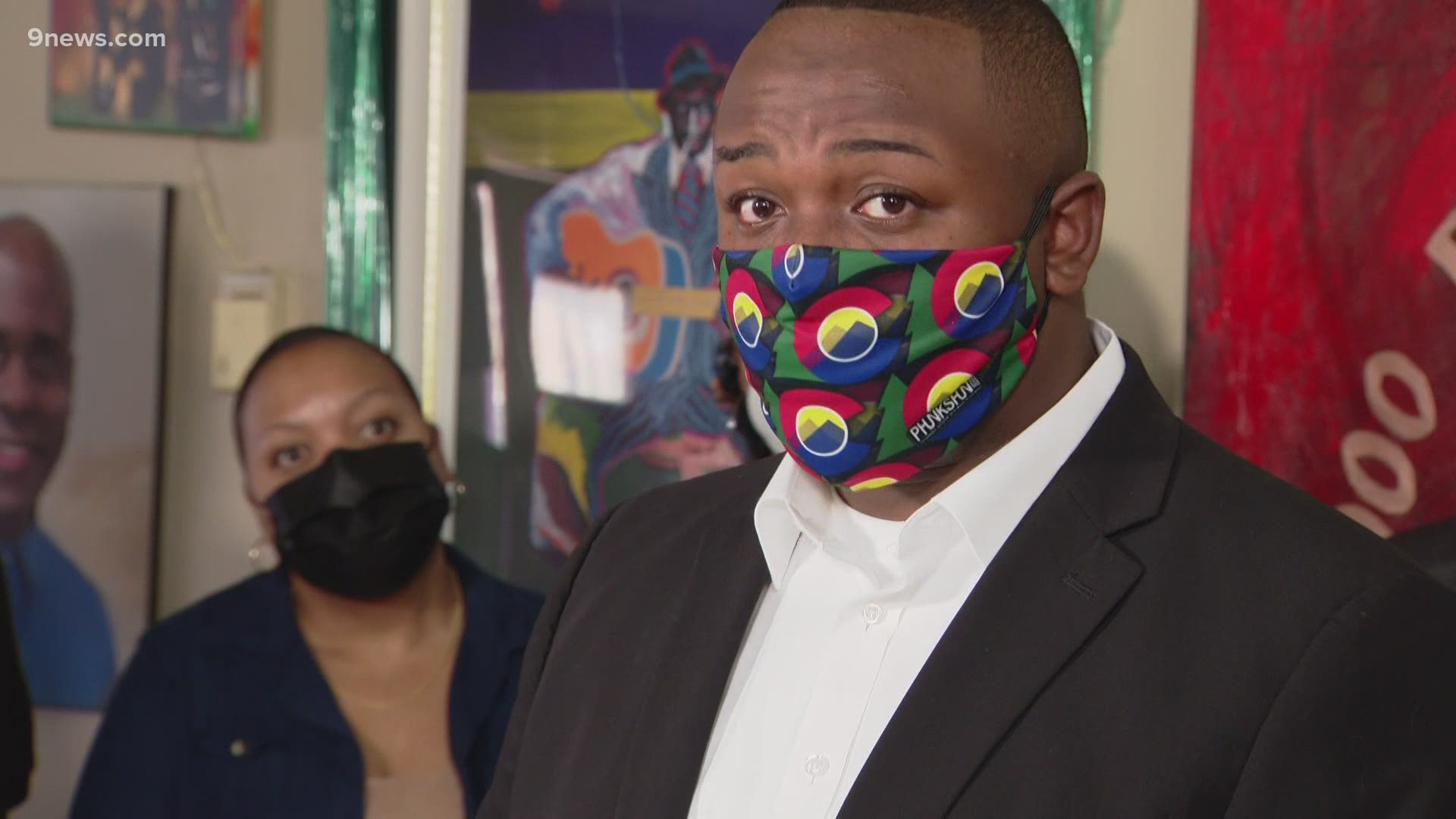 DENVER — Following allegations of sexual assault last week, Denver Public Schools (DPS) Board of Education Director Tay Anderson spoke to the media on Sunday where he said he's willing to cooperate and be held accountable, but cannot do so without knowing the details of the accusations.

"I did not sexually assault anyone," Anderson said, later adding that he needs to know what he's being accused of and what “sexual assault” means in this case.

The community organization Black Lives Matter 5280 on March 26 said that in late February, a woman came forward to BLM5280 alleging that Anderson "is the perpetrator of her sexual assault." Details of the alleged assault have not been released.

The statement, posted to the organization's social media pages, goes on to say, in part:

"At the request of the alleged survivor, we are publicly sharing this information in hopes of ensuring her and all of our safety and well-being. We trust that our supporters and community partners, as well as Dir. Anderson’s supporters and community partners, will be mindful of the struggle in outing oneself as a survivor of sexual assault; particularly when bringing allegations forth against a person in a position of power and influence. As such, the alleged survivor has requested to remain anonymous at this time."

"We will not allow the alleged survivor from yesterday’s statement or any of the other women who came forward afterward to be bullied into showing their faces," BLM5280 said.

A Denver Police (DPD) spokesperson said they have not received any reports against Anderson.

Anderson's lawyer, Christopher Decker, during Sunday's news conference repeatedly said honoring victims of sexual assault is important, but that the media is the only reason the allegations are being highlighted. He cited a lack of a criminal investigation and neither civil nor Title IX claims.

"Mr. Anderson has hired me so these allegations will be handled fairly and transparently," Decker said.

Anderson said he has never been a member of BLM5280 but has collaborated with the group in the past during his own work with community organizations.

"If I have overstepped or have hurt anyone, I deeply apologize," Anderson said when asked if he had a message for the alleged survivor. "I want to take accountability. But I cannot until I know what I am being accused of and by who."

Anderson, on March 27, released a statement saying in part he was unaware of any actions of his part that could be considered or construed as sexual assault.

The DPS Board of Education in a statement said it "shares this response to the anonymous allegation made against Director Tay Anderson. Denver Public Schools honors and values the voices of individuals who courageously bring forward reports or allegations of sexual misconduct.

"At this point, the Board has confirmed that there is no pending criminal investigation or charge. Director Anderson has released a public statement. The Board currently has no information other than what was stated in BLM5280’s post on social media."

BLM5280 said the alleged survivor’s only requests of Anderson are that he issue a public apology and seek help from a licensed professional with relevant expertise.

"Bear in mind that although these allegations have not gone through a formal legal process, BLM5280 is fiercely committed to protecting, uplifting, and believing Black women, decidedly as it relates to sexual violence," the organization's statement reads.

On Thursday, six former board members of the youth-run organization Never Again Colorado released a statement detailing experiences they claim happened in 2018 while Anderson was president of the organization:

"In support of the survivor who came forward through BLM5280 we want to attest to the misconduct we witnessed and experienced as women-identifying board members of Never Again Colorado under Tay Anderson who acted as President of our organization in 2018. We feel our account will add important context for those who were completely shocked that a survivor came forward.

Tay pursued female board members romantically/sexually on behalf of a friend and of himself. Doing so abused many power imbalances including Tay having professional power over another, Tay being an adult and the other underage (as young as 15), and Tay being sober and the other inebriated. He maintained an atmosphere where this kind of behavior was normalized. These power dynamics did not end at the hypersexualization of female peers - many of us felt silenced, undervalued and de-platformed.

This was extremely harmful to us as young women who were just starting out in the political activism world. There was an immense amount of pressure to never show or express discomfort for fear of facing consequences such as shunning, being given less responsibilities, or being talked about negatively by Tay behind closed doors. That being said, he was approached about his misconduct multiple times while Never Again was active and seemed receptive to the requests made but his behavior did not change in any meaningful way.

We hope those defending Tay reconsider their harmful rhetoric. Most importantly we stand with the survivor and want to second her call for Tay to make a public apology and pursue professional mental health counseling.

Anderson, elected to serve on the DPS Board of Education in November 2019, has been a vocal member of Denver's community addressing homelessness and social justice issues.