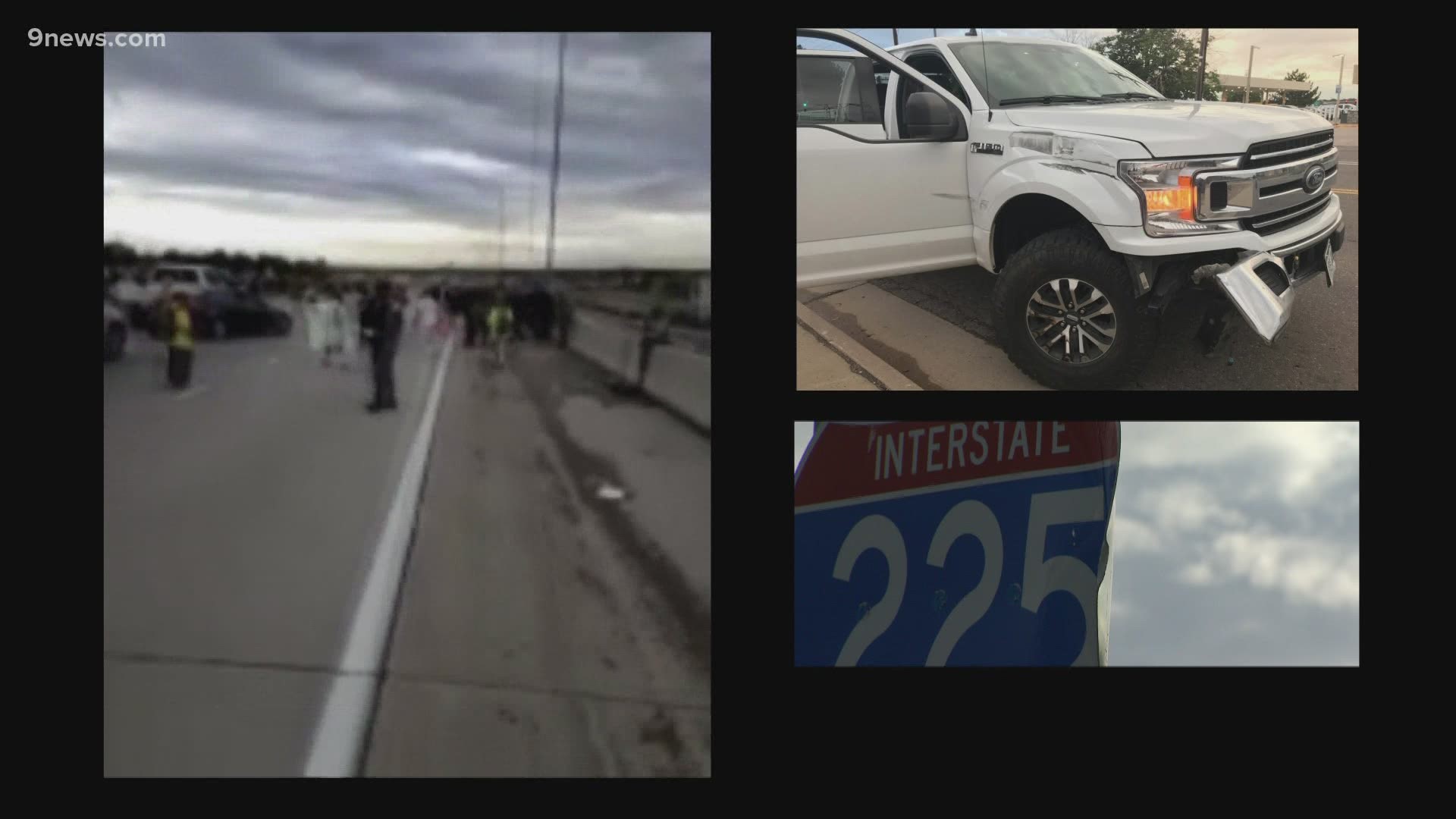 AURORA, Colo. — Two protesters were shot and injured by another protester during a march over the death of Elijah McClain on Saturday night in Aurora.

The group had made their way down East Alameda Avenue and onto Interstate 225, forcing the closure of the highway for a time.

While over I-225, Sky9 captured a Jeep barreling down the highway as protesters scrambled to get out of the way. 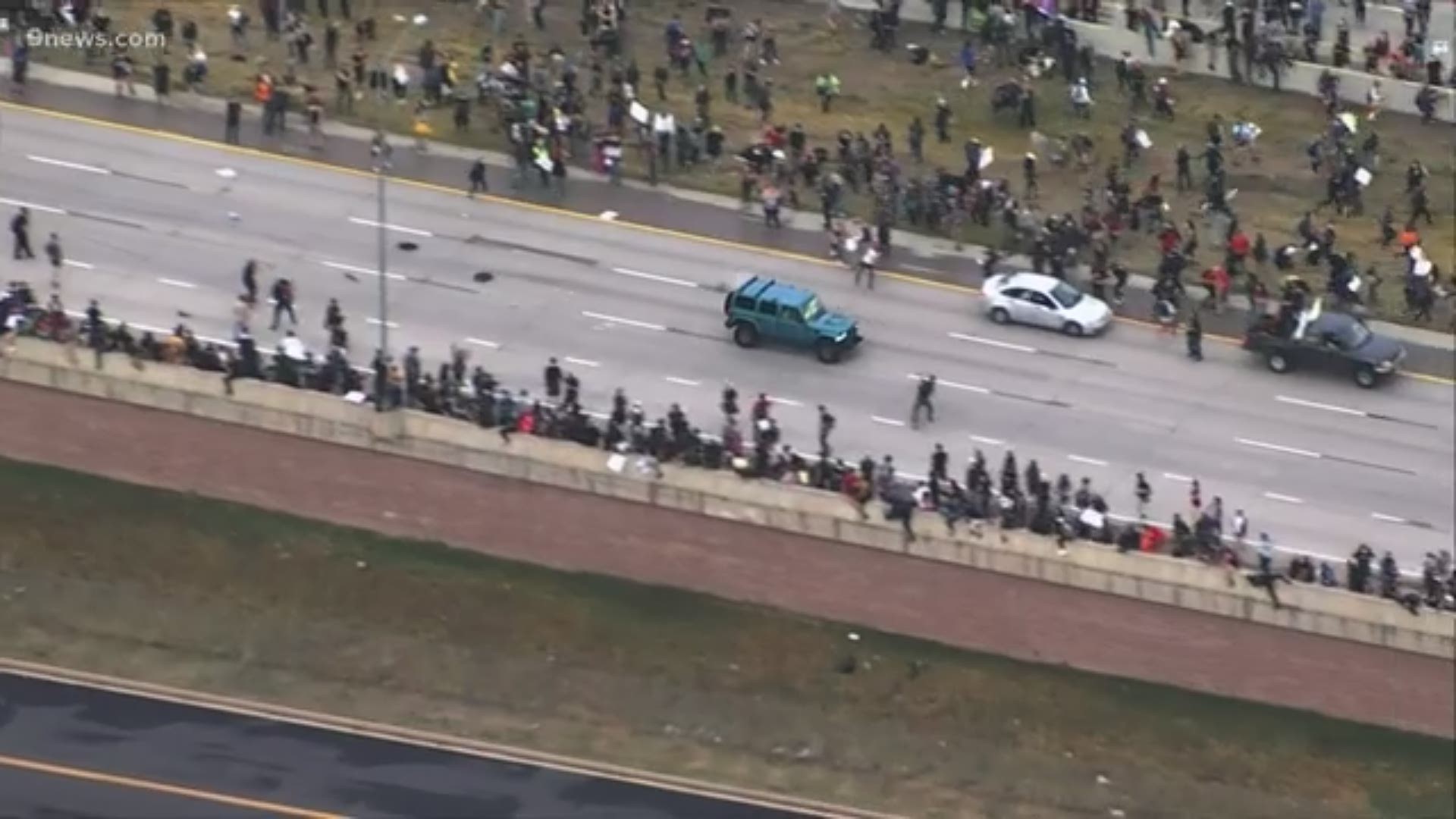 It did not appear that the vehicle hit anyone, but the Aurora Police Department (APD) tweeted that a protester fired a weapon at the Jeep and ended up striking at least one other protester. The person who was shot was taken to the hospital and was stable, APD said.

APD said another person showed up to the hospital with a graze wound.

Police said they were "in contact with the vehicle" and had towed it. No arrests had been made. It was not clear where the vehicle was found or whether the driver had been identified.

APD has released photos of someone they're calling a person of interest in the shooting.

RELATED: Aurora police release photos of 'person of interest' in I-225 shooting amid protest

>> Aerial shots from Sky9 can be found on the 9NEWS YouTube page.

By about 9 p.m., the group returned to APD headquarters and tore the fence surrounding the complex, prompting APD to declare the protest an "unlawful assembly" and ask those participating to leave the area. A tweet said that anyone who remained would be subject to arrest.

APD tweeted that the protesters were no longer peaceful, as they were throwing objects, shining lasers and shooting large fireworks at officers. They had broken windows to the courthouses and started a fire in an office, APD said.

Police said no one was arrested during the protests and that officers did not use any less-lethal weapons.

UPDATE: This has been declared an unlawful protest.

Everyone needs to leave the area immediately.

If you remain, you are subject to arrest. pic.twitter.com/4YlveNi1MC

9NEWS reporter Nelson Garcia was at the protest Saturday night:

McClain's death has garnered national attention after the in-custody death of George Floyd in Minneapolis and ensuing nationwide protests, which brought attention to police brutality and systemic racism.

Demonstrators in Aurora have protested and held vigils for McClain several times over the past few months.

McClain died Aug. 27, 2019 – three days after he went into cardiac arrest after a confrontation with Aurora officers. He was detained after a report of a “suspicious person” in the area. McClain’s family said he had been walking to the store and would usually wear a face mask when it got cold outside.

The City of Aurora is hiring a team to complete an independent investigation into McClain's death. Gov. Jared Polis also issued an executive order directing Colorado's attorney general to investigate the case.

APD posted a community alert regarding Saturday's protest to its blog, saying that "everyone has a right to lawfully assemble, and Colorado law prohibits disrupting a lawful assembly."

APD warned in the post that "fighting words" likely to provoke a violent reaction, a breach of peace, theft, destruction of property, assault and trespassing are not protected speech.