The charges were related to a 2020 incident where the doors of an Aurora police station were tied shut and the police officers inside were obstructed from leaving. 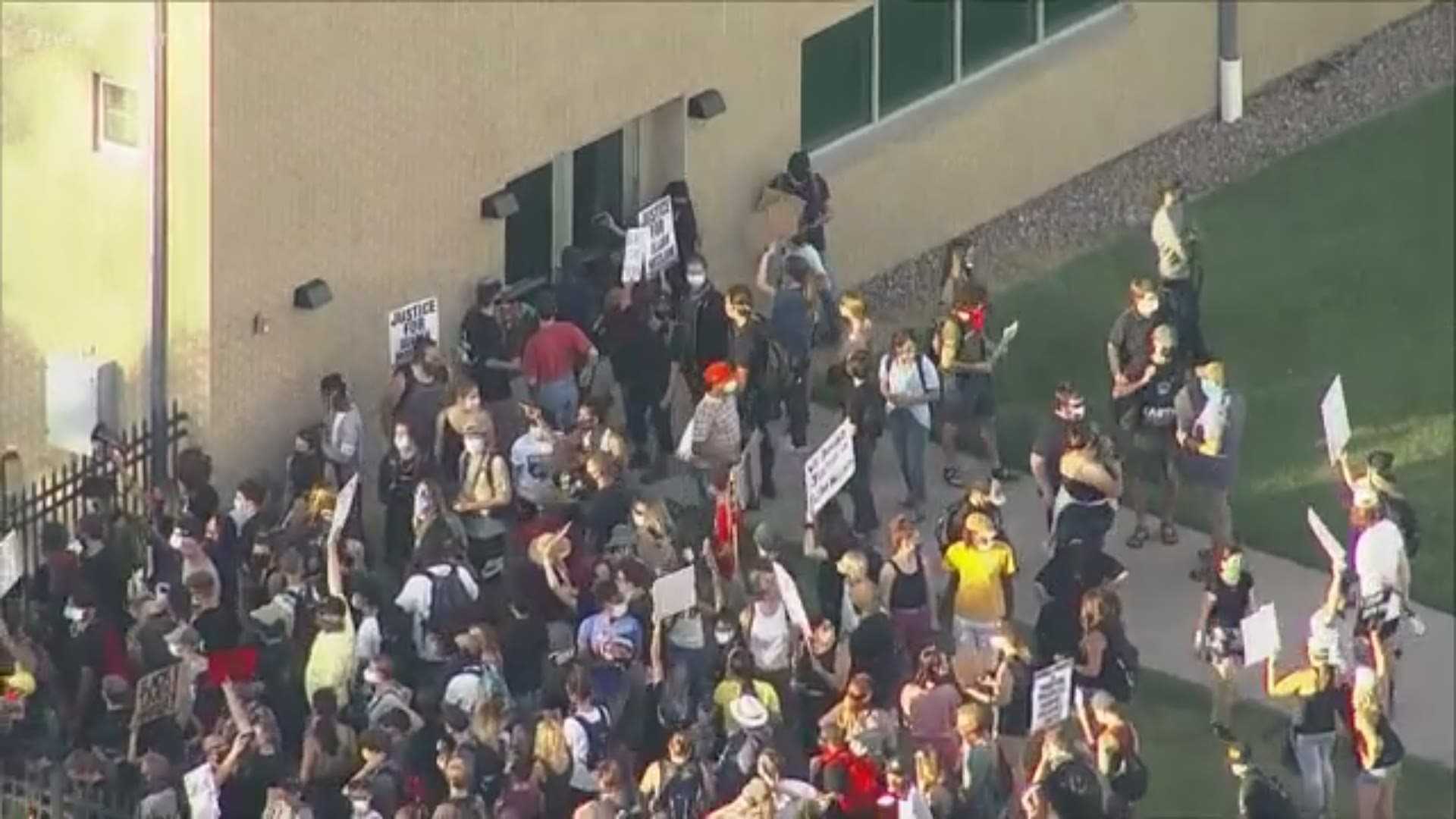 According to a release from the DA's office, Lillian House, Joel Northam, Whitney Lucero, Terrance Roberts and Trey Quinn are no longer facing charges for their roles in the protests outside of the Aurora Police Department (APD) District 1 Station on July 3, 2020.

The release said during that protest, a large crowd surrounded that station and that over the course of the event, the doors of the building were tied shut and the police officers inside were obstructed from leaving. The release said following the protest, House, Northam, Lucero, Roberts, and Quinn were formally charged by former DA Dave Young.

The following are the charges that were brought against the five protesters:

In March, the release said, the felony charge of attempted 1st degree kidnapping against House, Northam, and Lucero was dismissed by an Adams County judge.

Mason, who took office in January, released the following statement on the decision.

“After a thorough review of these cases, I have decided to dismiss the charges against these five individuals. I have an ethical obligation to only proceed on charges my office can prove and to dismiss charges that we cannot prove. My job is to do the right thing. After considerable thought and reflection, I believe dismissing these charges is the right thing to do.

“On the night of July 3, 2020, significant lines were crossed during the protest at Aurora’s District One Police Station.  It is not peaceful protest to tie the doors of a police station and prevent police officers from responding to calls for service.  Doing so is against the law, puts our community at risk, and undermines the principles of the First Amendment. I am gratified that the five individuals, whose cases I dismiss today, say they agree with these sentiments.

I grew up in Aurora and care deeply about this city. The Aurora community has gone through a lot and is deeply in need of healing. I hope that today’s decision will promote this; and that, together, we can seek peaceful and effective ways to address the significant issues of our day.”

All five protesters released statements, either through their attorneys or personally:

“Our clients, Lillian House, Joel Northam, and Eliza Lucero, applaud Mr. Mason in dropping the charges against them and authorize their attorneys to release the following statement.

Peaceful protest is a crucial avenue for the community to address injustice and a right that everyone in our country should be able to exercise without fear. All parties agree that lines were crossed on July 3 and 4.

The law is clear that tying doors to a police station is not legal and there has never been an allegation that our clients did so. The goals of peaceful protest are not to prevent police from responding to calls for service, but to affect change that addresses the needs of the community.

We believe in the First Amendment and its guarantee of the rights to free speech and to petition the government for redress of grievances. We are glad to move forward.”

“Free speech is an indispensable right guaranteed by our U.S. Constitution. The right to organize and protest is the foundation of liberty and a central tool for calling out injustice. For more than a decade-and-a-half, Terrance Roberts has organized and lead his community under principles of non-violent protest, inspired by the teachings of Dr. Martin Luther King Jr., Mahatma Gandhi, and other leaders.

It is Mr. Roberts’ understanding that on or about July 3rd and 4th, 2020, individuals in attendance at a peaceful protest he helped organize, crossed lines. Mr. Roberts wants to be clear— he does not endorse tying doors to police stations so that officers are unable-to respond to calls for service. Not only is this illegal, but it is counterproductive to the causes for which he organizes. Mr. Roberts did not call for such actions and does not support them.

Terrance Roberts does not promote nor approve of violence as a means of protest. Like the many activists and civil rights leaders who came before him, Terrance Roberts, believes in non-violent protest as the best way to arouse community consciousness and effect change. In the struggle of a lifetime, we cannot be afraid to raise our voices to be heard, but we must not resort to violence to get our point across. As Dr. King said, “our end is a community at peace with itself.”

“As one of the noted figures on the ground during the protest, there are a few things I feel must be addressed. The state of Colorado witnessed a large number of demonstrations. Some of these went in my opinion, too far. The night of the protest surrounding the Aurora police department is an example of the line between peaceful protesting and acts that inherently put the public in danger.

The tying of the doors turned into a potentially dangerous decision taken by protesters. With tensions already high, the protesters who locked and blocked the doors were directly putting in danger, anyone who would have called the police for aid. Unanswered 911 calls for any extended period of time is dangerous and this was all night. If the demonstration wanted to show its care for the public, there would have been a consideration for what the ramifications of preventing police from answering 911 calls could be.”

“I had come out to pressure the state into a conversation with myself and the community. I did not come out to dissolve any opportunity for legitimate dialogue between the state, police, and ourselves. I seek real solutions. I do not seek a drawn out standoff as the entry to a beneficial understanding. What concerned me that night was the idea that in this continued manner of protesting, very few solutions will come. The state will pour dollar after dollar into the police department to stand off with protesters, just as protesters will pour their sweat into standing off with police. This will not create an actual safer society.

Everyone is militarized and no one is thinking that beneath every outfit, uniform, or ideology is a human being. If in fact they want to, people change, feelings change, ideas, and relationships change. Everyone will live in fear the longer we avoid talking to each other as humans. We MUST eliminate the hatred between us, we must communicate to a greater degree. If we seek accountability from officials and police it has to be by engaging in adult, truthful, and agreeable conversations. We must also look in on our own communities and have honest conversations. Then all of us must come to the table and be honest and speak truly to one another.”