Jason Rosenblatt was not pictured in the photos but replied “HaHa” after receiving them. He is suing over his denied request for an Independent Review Board. 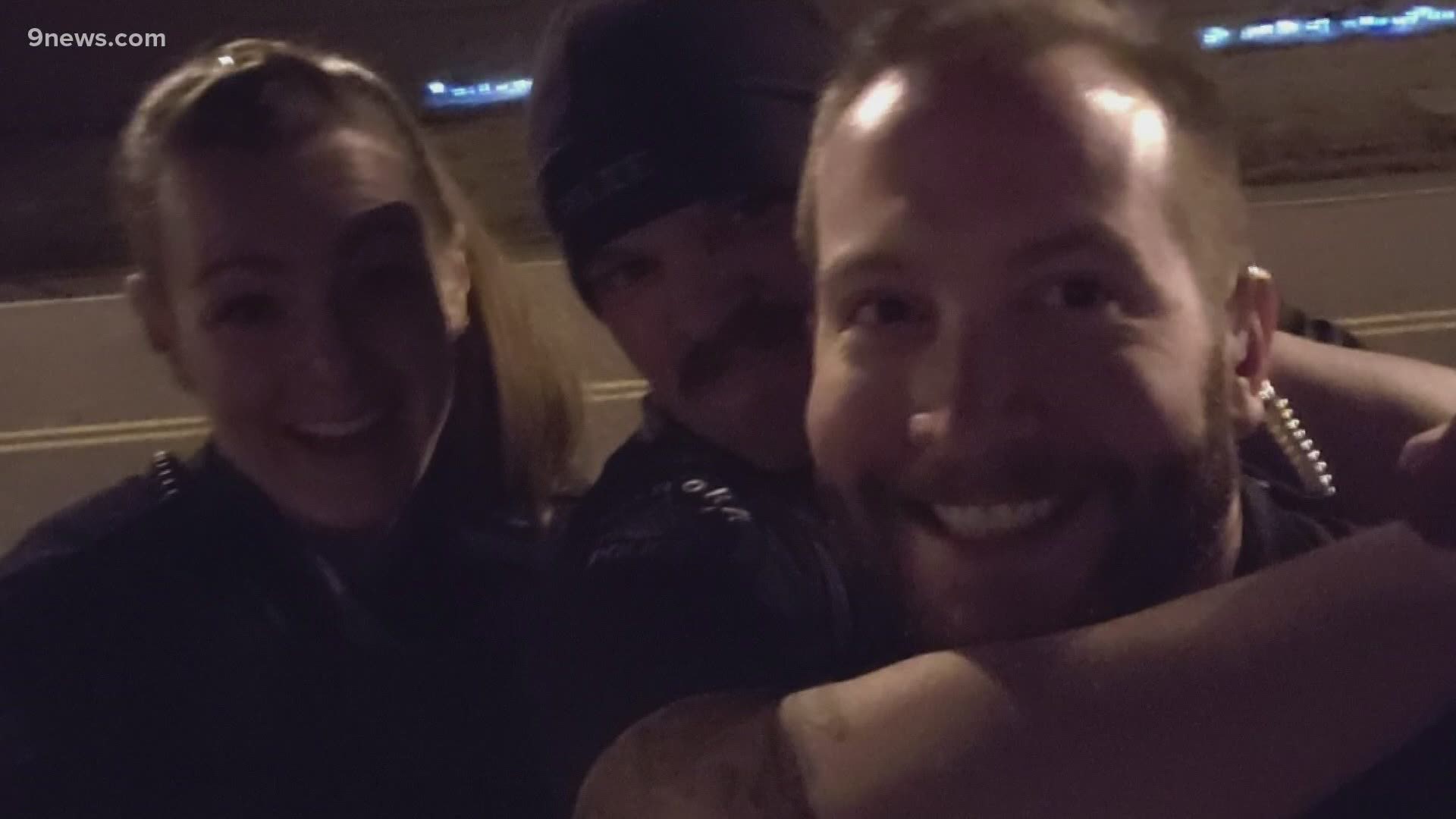 AURORA, Colo. — Jason Rosenblatt, one of several Aurora officers involved in a photo scandal near an Elijah McClain memorial, is suing the department's interim police chief and city manager after being denied an Independent Review Board (IRB) prior to being terminated.

According to documents released by the Aurora Police Department (APD) earlier this month, photos depicting a choke hold taken at the site where McClain had an encounter with Aurora officers and later died, were texted to Rosenblatt, who responded with “HaHa.” Rosenblatt was one of the three officers who responded the night of McClain’s encounter. Aurora's interim police chief, Vanessa Wilson, said he was fired for his "utter inability to do the right thing" when he was also involved in the incident with McClain.

RELATED: The death of Elijah McClain: Everything we know so far\

Credit: APD
One of two photos depicting a choke hold taken at the site where Elijah McClain had an encounter with Aurora officers.

After Rosenblatt learned about Wilson's decision to terminate him, he sent an email to Wilson that same day requesting in writing an IRB. Wilson denied that request and adopted the position that allowing an IRB is “permissive” and that it was within her discretion as chief of police to deny Rosenblatt's request for an IRB, documents say.

Rosenblatt claims in the documents that as an Aurora Police Officer, he has specific rights granted to him under the City of Aurora Human Resources Policy and the Aurora Police Department Directives, including the right to an IRB prior to the imposition of discipline against him.

The IRB, implemented in 2015, is designed to assist the chief of police in the deliberative process of determining an appropriate level of discipline for instances of sustained misconduct by APD officers.

The documents say per Aurora's human resources policy, the chief can issue discipline without input from the IRB only in matters involving criminal conduct by an officer: “In matters involving allegations of criminal conduct by a member of the department, the Police Chief may, in his/her discretion, move to discipline or terminate the member without input from an IRB.”

Two of the three officers who took the photographs depicting the choke hold were also terminated. The third officer resigned before his punishment could be handed down.

Those two officers, Kyle Dittrich and Erica Marrero, filed appeals on July 8, according to a spokesperson for the city. On July 9, the city spokesperson said they also received an appeal of termination from Rosenblatt.

Aurora's city manager, Jim Twombly, is also listed as a defendant. The document says Twombly is authorized by the Aurora City Charter to approve, modify or disapprove any disciplinary order against an Aurora Police Officer that involves a monetary impact against the officer greater than one-third of the officer’s monthly salary.

The August 2019 death of McClain has now made international news as Black Lives Matter protesters across the U.S. have called for justice for the 23-year-old, who died of cardiac arrest after an encounter with APD.

The officers involved in McClain’s death, including Rosenblatt, were cleared of wrongdoing earlier this year, but the Colorado attorney general has now been appointed as a special prosecutor, and the Federal Bureau of Investigation (FBI) and Department of Justice (DOJ) are eying a federal civil rights investigation.