The move comes after an independent report called the investigation into the death of Elijah McClain flawed. 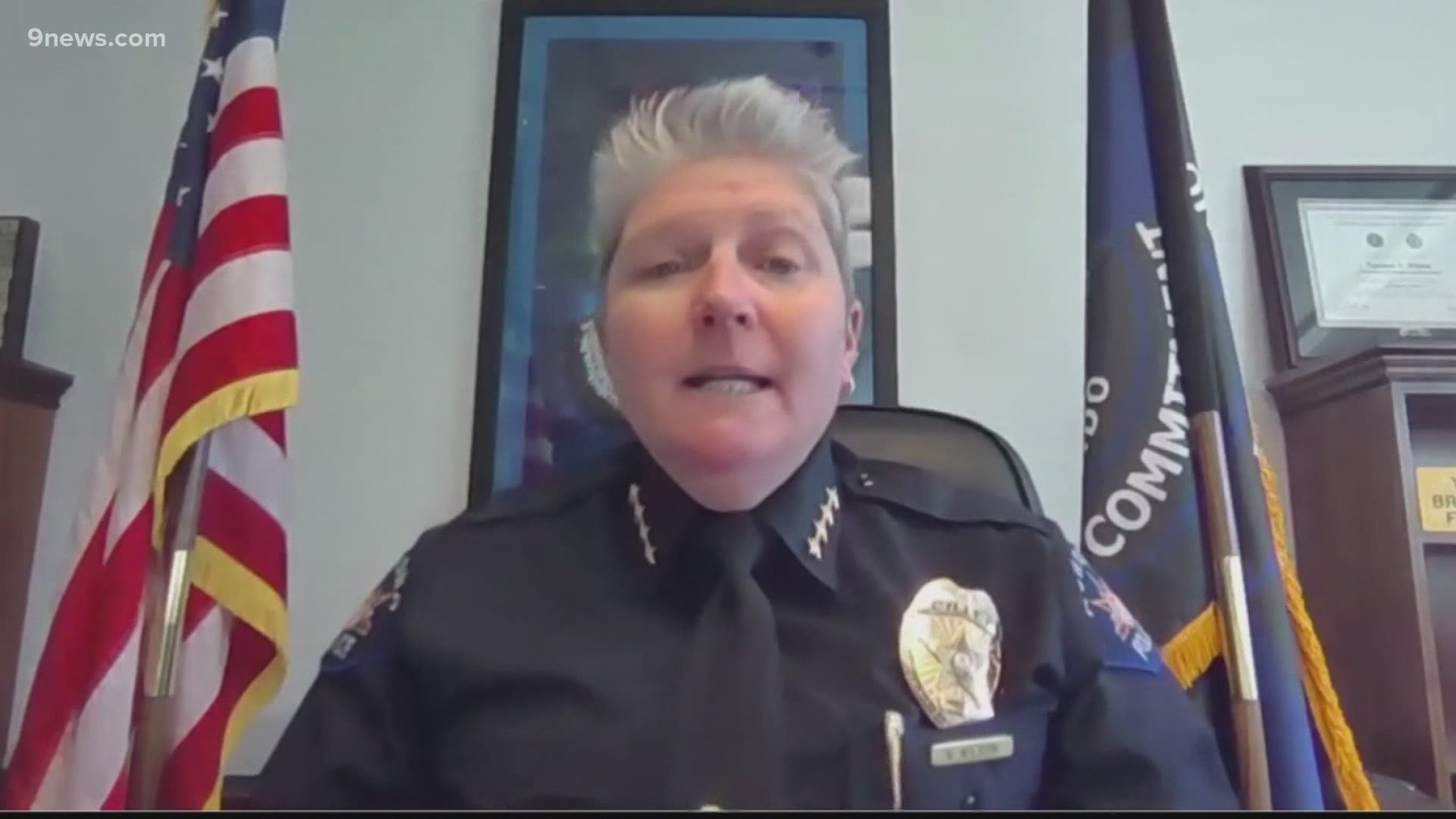 AURORA, Colo. — In light of the findings of an independent investigation into the death of Elijah McClain, who died following an interaction with Aurora Police (APD) in 2019, the chief of police acknowledged that he should be alive today.

"The bottom line is Elijah McClain should still be here today," said APD Chief Vanessa Wilson in her opening remarks. "Nothing I can say here today or changes that I have made, or the changes that I will continue to make, can bring him back and for that, I am extremely sorry."

McClain, 23, died after an interaction with APD officers on Aug. 24, 2019. The department said officers were called to the area of Billings Street and East Colfax Avenue after receiving a report of a "suspicious person." That's when they encountered McClain. His death has garnered nationwide attention and scrutiny.

"The report talked about implicit bias," said Wilson. "I think we all have it, but I want to ensure that if a community is calling in about a suspicious person that that is never due to the color of their skin or the clothing that they're wearing."

Wilson was joined by Aurora Fire Rescue (AFR) Chief Fernando Gray and City Manager Jim Twombly at a briefing to discuss the findings of the report. During that call, Twombly called for the creation of an independent monitor, which is typically an independent, civilian police oversight agency to "enhance accountability and transparency" of the police department.

"I believe the investigative team has identified the issue that is the root of the case, the failure of a system of accountability," he said.

Twombly said the city had already provided funding for a police auditor position which he said has already conducted a body-worn camera audit and is now looking into the use of K9s.

He also said the city has contracted with an outside firm to take an overall look at the department's policies and practices to include recruitment, hiring, training and discipline.

Wilson said she believed the creation of an independent monitor was "the only way" they were going to regain the trust of the community.

She said she wanted to ensure the McClain family and the community that they'll continue to make changes based on recommendations from this report and other investigations that are ongoing, which include a criminal investigation by the Colorado Attorney General's office.

"We will evolve and we will become the police department the community can trust," she said.

On Monday night, the independent, third-party investigation team presented its findings to the Aurora City Council and Mayor Mike Coffman at a special study session.

The panel's report said, "neither the caller nor any of the officers involved identified a crime that [McClain] was suspected of committing at the time that he first came to the officers' attention."

"[McClain] came to the attention of police because a 911 call reported that he was wearing a ski mask on a summer evening and waving his arms and gesturing," the report says.

The report also says that audio recordings reveal a distressed McClain making desperate pleas as he identified himself to the officers.

"The audio of the incident records Mr. McClain crying out in pain, apologizing, vomiting and at times sounding incoherent," the report says. "His words were apologetic and confused, not angry or threatening. He became increasingly plaintive and desperate as he struggled to breathe."

Serious concerns and significant weakness in the department's accountability system were exposed during APD's ensuing investigation, the report says.

Issues with the investigation into the death by the Major Crimes and Homicide Unit for APD raised some of those concerns, according to the report.

In addition, the report Major Crimes presented to the district attorney and relied upon by the Force Review Board "failed to present a neutral, objective version of the facts and seemingly ignored contrary evidence," according to the report.

"This report has tainted a lot of people's opinions on our Major Crimes Investigations Unit," Wilson said. "But I can tell you there are good investigators."

When asked, she declined to say whether any of the officers involved in that investigation would face discipline, citing the ongoing criminal investigation into what happened in August 2019, but said she's reaching out to both the 17th and 18th Judicial District Attorney's offices how any future in-custody deaths or officer-involved shootings should be investigated.

"Whether it is to sit back and give the lead to another agency or to have the district attorneys investigate it themselves," she said. "Lots more conversations need to happen. We need to sit down, roll up our sleeves and make sure we're doing everything possible to re-instill the community's trust."

Finally, the report finds the review by the department's Force Review Board was cursory and summary at best.

"Without a detailed examination of the justification for the use of force throughout the incident, important opportunities to identify problems and reform practices were lost," the report says.

Gray, the chief of AFR, said Tuesday they're working with APD to "clearly define" the process from suspect to patient. He also said there are no immediate plans to begin administering ketamine again until they can thoroughly look at the findings from the report.

He outlined the following other changes:

According to a district attorney's report, paramedics overestimated McClain's weight by 80 pounds, and he was given a 500mg dose of ketamine.

The report says the panel also "identified a need for the City to review its policies, practices, training and culture regarding implicit bias, to reform its crisis intervention system, to maintain the independence of EMS, and to consider the impact of options other than ketamine."

Sheneen McClain, Elijah's mother, said in a statement the investigation's results make it clear he should have not been stopped, arrested, subjected to extreme force by police or forcibly injected with ketamine by paramedics.

Sheneen McClain said she agreed with the report's findings that officers "applied pain compliance techniques and restrains to Mr. McClain continuously from the first moments of the encounter until he was taken away on a gurney."

"Aurora is responsible for Elijah’s tragic death by virtue of its employees’ unlawful and unconscionable actions," Sheneen McClain said. "At every step of the way — from their initial stop of Elijah through the involuntary injection of an extremely dangerous drug for no medical reason — Aurora officials indisputably violated Mr. McClain’s constitutional rights."

She also noted that the report did not include any new evidence, and said she supported its criticisms of the department's investigation into the death.

In November 2019, Dave Young, who was district attorney for the 17th Judicial District, declined to file charges against officers in connection with McClain's death.

No Aurora police officers who encountered McClain have lost their jobs for the incident, though one of them was later terminated for responding "haha" to a photo sent to him by his coworkers depicting them mimicking a chokehold near where the incident involving McClain happened.