J Audrey Nelson wanted to create something beautiful that would get people to stop and take a closer look. Her work caught the attention of History Colorado. 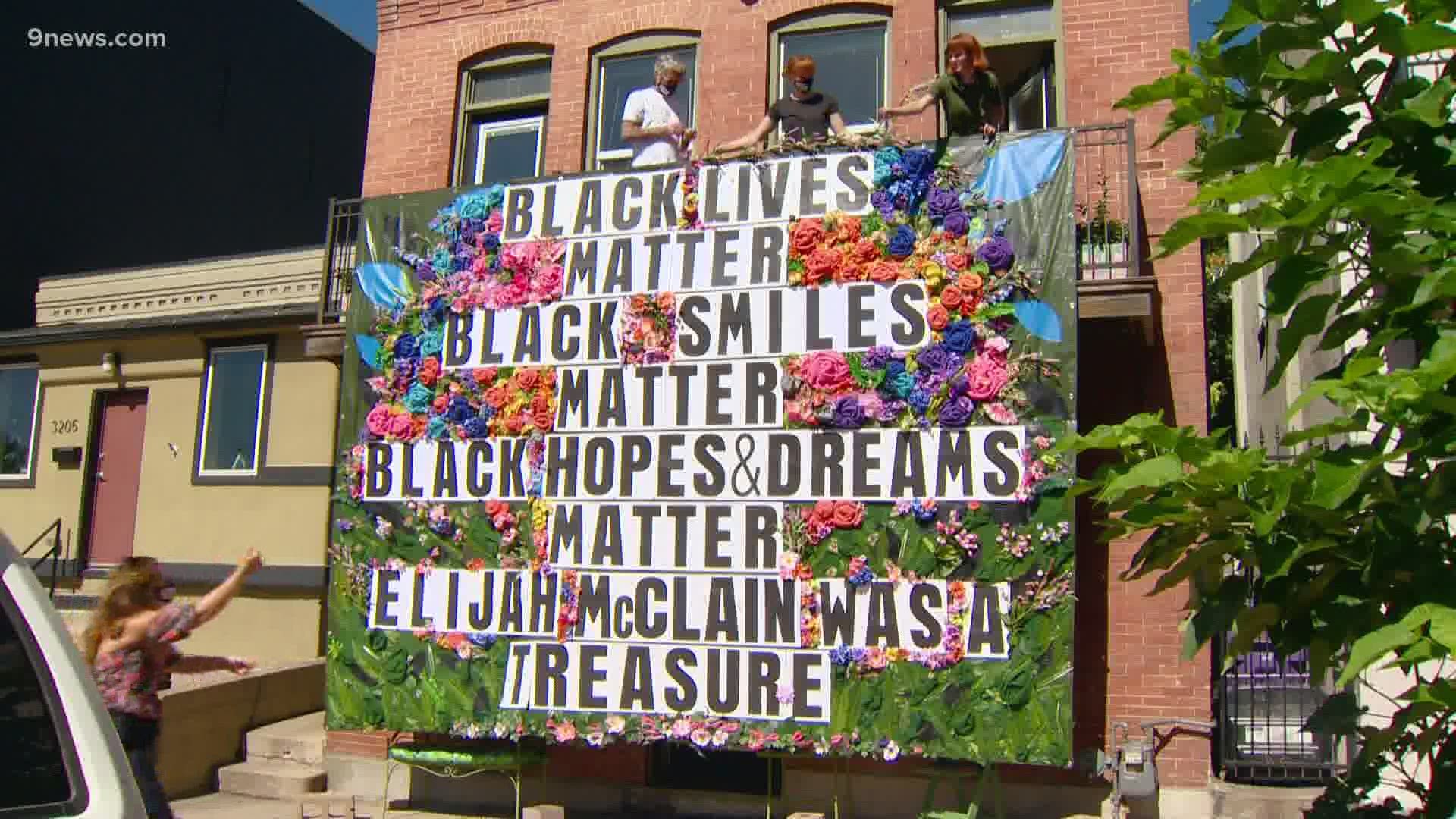 DENVER — The only car that could fit in J Audrey Nelson's garage is the kind Barbie would drive.

“I am a hoarder or crafts," Nelson said, standing in her garage workspace cluttered with boxes of art materials.

“No cars. Not in this garage," she smiled. "Nobody has time for that.”

Nelson, an artist and owner of the StoryBrick Salon in Denver, gladly gave up parking to protect a message.

"This is my Black Lives Matter sign," Nelson said, gesturing toward the giant tarp covered in flowers made from fleece and words the artist was inspired to write.

“I wanted the sign to resemble your typical protest sign with a big clear statement," Nelson said. "Then, with the flowers, I also wanted to make sure that it was beautiful and would stop people to make them look a little bit closer.”

On Wednesday morning, Nelson enlisted the help of coworkers and friends to move the message from her garage to her storefront where she first displayed it weeks ago.

“After George Floyd’s death, I was devastated and horrified, and I really wanted to do something to give back and spread the message about Black Lives Matter," Nelson said.

Nelson spent weeks creating the sign in her garage.

The salon owner decided to hang the sign from the balcony of her business on Osage Street near West 32nd Avenue.

“I really didn’t want to make the sign about me," Nelson said. "I covered my whole storefront. I didn’t sign it or use hashtags or anything because I really just wanted it to be about the message.”

The message caught the attention of a museum.

“The sign is actually going to go to History Colorado,” Nelson said. "I have gifted it to them, and I’m really excited about that."

On Wednesday, Mark Nelson, a collections manager at History Colorado, and a colleague came to take photos and document J Audrey Nelson's sign.

“This may be the biggest sign or banner that we will have in our collection, so that certainly makes it unique," Mark Nelson said.

J Audrey Nelson's piece will be added to the museum's "History in the Making" contemporary collecting project that launched March 25.

“It’s tied to collecting what’s happening right now both with the Black Lives Matter movement, but also tied to COVID and other things that are happening in this unprecedented time," said Alisa DiGiacomo, director of curatorial services at History Colorado.

The museum collected voicemail messages and journal entries from community members and conducted interviews and surveys as part of the project.

“What we’re really looking for are stories to connect people right now and through that connection we are preserving this moment for people now, but [also] down the road,” DiGiacomo said.

“Because it’s beautiful, but it tells so many stories – that’s what we were really interested in," DiGiacomo said. “We’re hoping to potentially exhibit it, but it will also be available through our online database."

J Audrey Nelson is grateful the message she protected in her garage is going to be preserved.

“I really do hope that this point in time does become a big moment in history," she said. "I hope the reason is because a lot of change comes.”