A Colorado teen's impact in Haiti

Several years ago, 9NEWS introduced you to a young man named Zach Harris, who created an orchestra for children in Haiti. 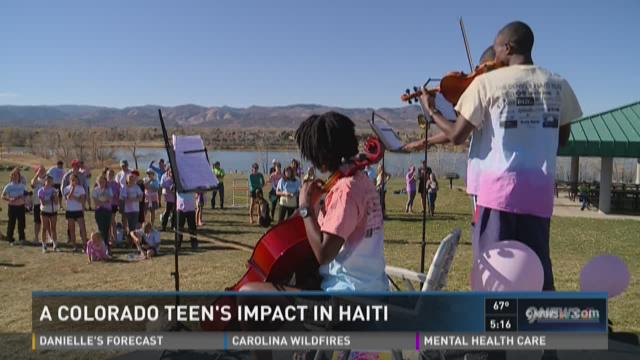 KUSA - Several years ago, 9NEWS introduced you to a young man named Zach Harris, who created an orchestra for children in Haiti.

Harris has two adopted siblings from Haiti. It was his way of giving back after the devastating earthquake of 2010.

When Haiti Youth Orchestra was started, there were around 20 students who took part by playing used instruments brought to Haiti from the U.S. Now, the program has tripled in size, according to Harris.

"Theres such a power in music that I love sharing with everybody," Harris says, "It's especially cool to share it with these young Haitians who really, unfortuantely, have a very tough life."

What started out as a way for students to take their minds of tragedy just kept growing.

Several of the original band members from the Haiti Youth Orchestra have returned to Colorado to share what they've learned.

Peter Clervoyant, 21, is one of three students who played before and after the first ever Denver Haiti Run at Clement Park Saturday.

They played the Haitian National Anthem as a way to bring a part of their country here, according to Clervoyant.

He and the other band members also had the opportunity to work besides the Colorado Symphony, which has been supporting the non-profit through hands on education.

"I would like to become a teacher to teach music all over Haiti," Clervoyant explained, "It was a dream to do this."

The Colorado Symphony sends music teachers to Haiti and also provies a unique experience for students in Colorado. The students got to sit by band members Friday night and will have a chance to play with the symphony before the MasterWorks series begins Saturday evening.

In the 4 years the Haiti Youth Orchestra has been in place, the organization has grown to around 80 students who impact their local community by playing music at schools, hospitals and events.

For students, the impact can last a lifetime.

"There are several kids in the Haiti Youth Orchestra right now that ended up getting job opportunities and going to college that would not likely have otherwise," Harris said.

Four years ago, Clervoyant hadn't touched an instrument. Now, he says he hopes to change lives through his music one day.