Barry Brodd, the defense's use-of-force expert, testified that he believes Derek Chauvin acted with "objective reasonableness" in his restraint of George Floyd. 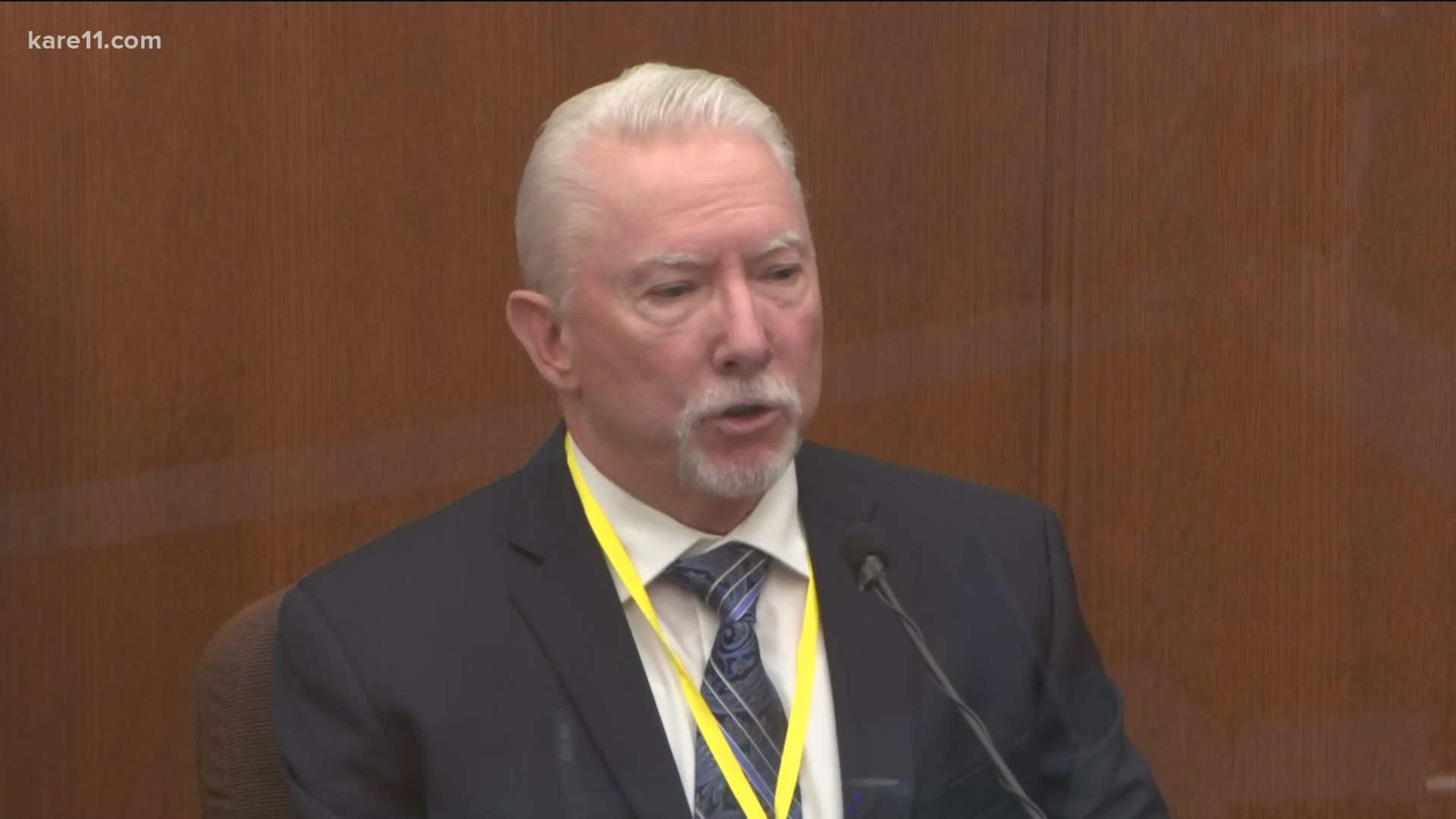 MINNEAPOLIS — A use-of-force expert called by Derek Chauvin's defense testified Tuesday that the former Minneapolis police officer acted with "objective reasonableness" in his restraint of George Floyd last May.

Barry Brodd told the jury his opinion that Chauvin didn't use "deadly force" when he pinned Floyd under his knee for nearly 10 minutes on May 25, 2020.

Brodd, who said he's served as a use-of-force expert in more than 140 cases, testified in another high-profile case: the trial of the former Chicago police officer who shot and killed 17-year-old Laquan McDonald roughly seven years ago. In Jason Van Dyke's trial, Brodd testified that every one of the 16 shots the white officer fired at the Black teenager was justified, WBEZ reported.

Brodd said that he contacted the city attorney's office and offered his services for Chauvin's trial. He testified that he was then retained as an expert by Chauvin's defense attorney, Eric Nelson.

Brodd received thousands of pages of documents, but focused his review on videos, interviews and use-of-force policies.

"I felt that Derek Chauvin was justified and was acting with objective reasonableness, following Minneapolis Police Department policy and current standards of law enforcement in his interactions with Mr. Floyd," Brodd told the jury.

He said he evaluated Chauvin's force by referencing Graham vs. Connor, a U.S. Supreme Court case which has three prongs to determine the reasonableness of an officer's use of force. According to its use-of-force threshold, an officer doesn't have to be experiencing an imminent threat, but can have a "reasonable fear" of an imminent threat, Brodd said.

"It's easy to sit and judge from an office on an officer's conduct," Brodd said. He said it's harder to put oneself into the officer's shoes and feel their fear in the moment.

Brodd told the court he believed officers used justified force in putting Floyd on the ground in the prone position, because he said Floyd was "actively resisting." However, he said, "I don't consider prone control as a use of force."

Brodd added that the prone position may be safer for a person being arrested, to keep them from running while handcuffed and injuring themselves.

"It doesn't hurt, you've put the suspect in a position where it's safe for you the officer, safe for them – the suspect – and you're using minimal effort to keep them on the ground," he said.

But upon cross-examination by state prosecutor Steve Schleicher, Brodd admitted that the prone position could be viewed as a use of force.

"If the pain was inflicted through the prone control, then yes I would say that's a use of force," Brodd said.

He also acknowledged that "someone pressing down on you" while in the prone position could create a risk for positional asphyxia.

Mary Moriarty, Hennepin County's former chief public defender, told KARE 11 that the basis of Brodd's testimony is that the prone position is not a use of force, but simply a tactic to control Floyd.

Moriarty said Brodd's admission that the prone position would constitute use of force if pain was inflicted is important for the state, because "if it is force, its unreasonable" since at some point when Floyd was in the position "he was no longer resisting and he was compliant."

In his testimony, Brodd also told the jury about a concept he called "one-upmanship," saying that "police officers don't have to fight fair."

He explained that an officer doesn't have to use the same tactic the person they're arresting is using in order to gain control of them.

Upon cross-examination, Schleicher asked Brodd if he saw the term "one-upmanship" in the Minneapolis Police Department's use-of-force policy. Brodd testified that he did not, but rather that he used it to describe national law enforcement practices.