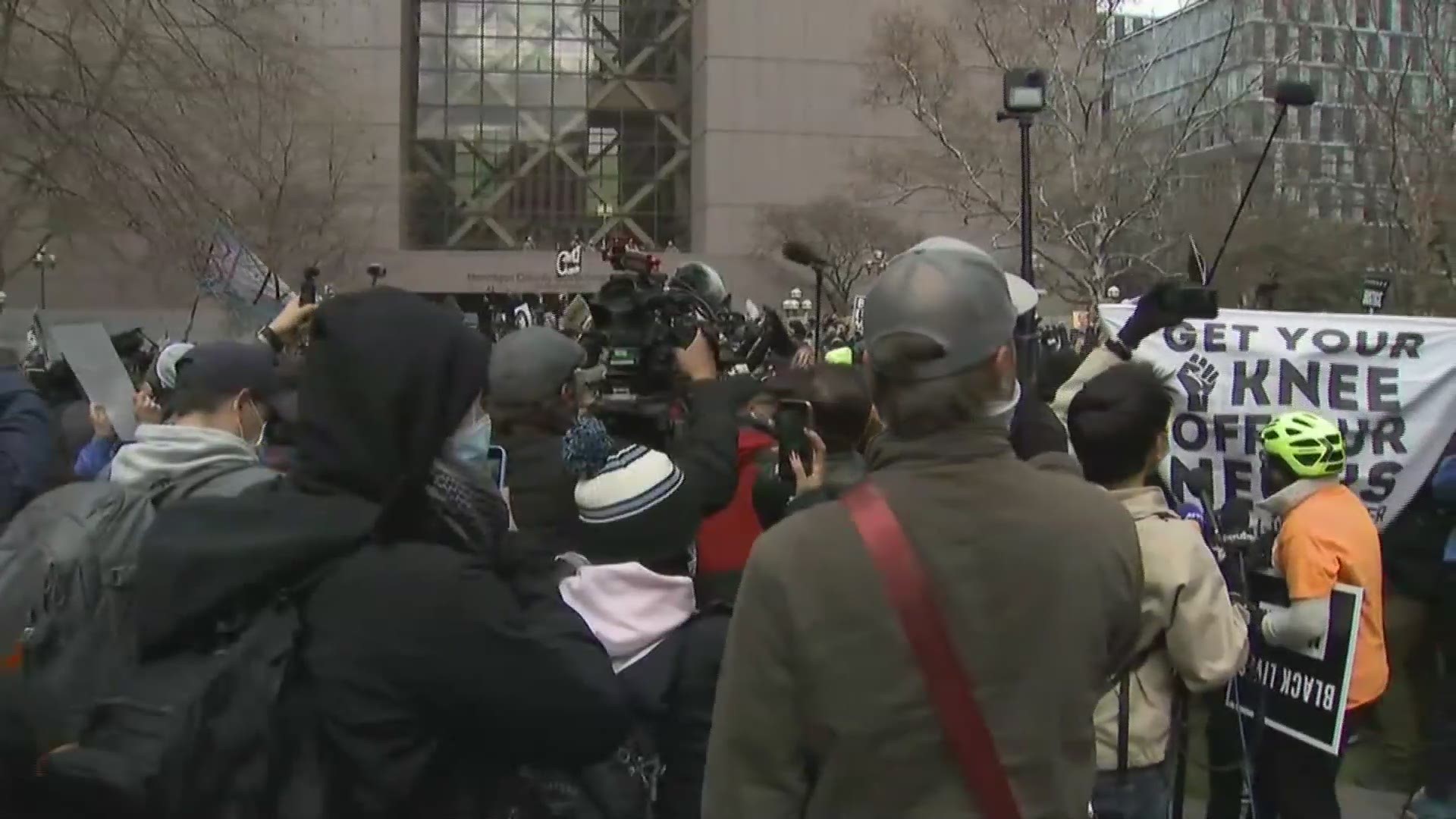 CLEVELAND — Northeast Ohio community leaders are reacting to the conviction of former Minneapolis police officer Derek Chauvin for the murder of George Floyd.

Floyd, 46, was killed on May 25, 2020, as Chauvin was captured on police body camera footage and bystander video kneeling on his neck for nine minutes and 29 seconds.

The 12 jurors responsible for deciding the case deliberated for four hours on Monday night, and met again at 8 a.m. Central time to continue discussions on Tuesday. The Minnesota Judicial Branch gave word that a verdict had been reached at around 2:30 p.m. local time. That timeline suggests the jury reached its verdict in just over 10 hours.

Within minutes of the verdict being announced, leaders in Northeast Ohio began sharing their reactions to the conviction, as Chauvin left the courtroom in handcuffs to await his sentencing.

Ohio Gov. Mike DeWine shared his thoughts following the guilty verdicts handed down by the jury in a statement released to 3News.

"A jury in Minneapolis has spoken by convicting Derek Chauvin of second and third-degree murder and second-degree manslaughter in the death of George Floyd. Our system of justice worked. The jury members listened to both sides, weighed the evidence, and came to this verdict.

"As we go forward as a nation, we must learn from the tragic death of George Floyd."

US Sen. Rob Portman took to Twitter Tuesday evening to share some of his thoughts following the verdict, stating that he hopes to see nothing like the death of George Floyd ever happen again in the United States.

"George Floyd’s death was tragic and should never happen to anyone in America," Portman wrote.

George Floyd’s death was tragic and should never happen to anyone in America.

I am grateful today that justice appears to be served as we await sentencing.

"Through pain, grief, and trauma, Black communities across this country have led the nation in calls for change and have pushed this country to live up to our fundamental ideals. The protesters who led marches for justice last summer still believe enough in the American experiment to demand we do better.

This must be a turning point in our country to reform a broken justice system that has failed Black Americans over and over. pic.twitter.com/cYPSnGznwY

Ohio U.S. Rep. Joyce Beatty tweeted that while she was relieved by the guilty verdicts and that justice has prevailed here, "that's not always the case."

"I will continue to say the names and fight for all those who have died or been injured senselessly by law enforcement. Breonna Taylor, Daunte Wright, Adam Toledo, Andre Hill, Casey Goodson Jr., Tamir Rice and George Floyd should be alive, and no verdict will bring them back or undo the unimaginable heartache and loss their family, friends, and our communities have had to endure," the congresswoman said.

Rep. Tim Ryan shared a statement with 3News around 8 p.m. Tuesday evening commending the verdict, while also imploring for more systematic change for the future.

"Today the rule of law prevailed on behalf of George Floyd, his family, and the people of Minneapolis. But while this verdict was a victory for Black and Brown Americans and for our country at large, true justice will not be found until we ensure there are no other George Floyds, Breonna Taylors, Eric Garners, or the countless other Black and Brown Americans who have unjustly had their lives cut short by those sworn to protect them.

"The problems we face are systemic and if we are going to make real and lasting change, the solutions will too need to be systemic. We cannot stop marching. We cannot stop speaking. Today should give us all hope that our justice system can work for every American — not just a select few — but now we must continue to demand progress so we can usher in true justice for all. This will take all of us to not only change our institutions but change ourselves and the way we see and treat one another."

Rep. Marcy Kaptur added that "Justice is served," but added, "The fact remains that George Floyd should be alive today."

Justice is served. The fact remains that George Floyd should be alive today. Let us derive strength from his memory, and the memories of countless others, to carry on our fight for a reimagined system of justice that actually treats people with dignity, respect, and equality.

"Today’s verdict in the Derek Chauvin trial is a bittersweet moment in the name of justice for George Floyd’s family and community. Despite the jury decision, we must continue to peel back the injustices in our criminal justice system and how we police in communities. Make no mistake, George Floyd should be alive—his life was taken far too soon from authorities who are sworn to protect him.

"As a public servant, I will continue to fight relentlessly to change those systems. It is vital, now more than ever, that we are doing the work to build trust across all communities. We must listen to the needs of each and every one of us and address our societal flaws directly. I am committed to that fight for Cleveland, and communities all across Ohio."

The City of Cleveland also released a statement on Tuesday, asking residents to lawfully gather following the delivery of the verdict.

"We, continue to hope and pray for the family of George Floyd and his loved ones. The City of Cleveland supports citizens’ First Amendment rights to free speech and assembly and encourages people to express their views and opinions, however this must be done lawfully. Every resident in this City has and deserves to have a voice in this conversation. Since the inception of the Consent Decree, the Cleveland Division of Police has made strides toward compliance with the revision of existing policies and the implementation of new ones. We recognize that although progress has been made, additional growth still needs to take place."

As a former prosecutor, I have great respect for the rule of law, due process and our nation’s judicial system. Today, that system delivered justice for the murder of George Floyd. I thank the jurors for their service and continue to pray for the Floyd family. https://t.co/aZcNCPKf1w

"I held my breath like so many tonight watching the verdict come in. It shouldn’t take this. It shouldn’t take the trauma of George Floyd’s murder during an epidemic of police violence to remind us of the unfinished business that haunts this country," said Turner. "We have had plenty of unnamed martyrs and the pain and ache that Black people feel cannot be healed with promises or platitudes but requires intentional action, unrelenting commitment and deep political will to dismantle deadly policing that is rooted in racism, Anti-Blackness and White Supremacy."

The Cleveland chapter of the NAACP released a statement saying that they are praying for George Floyd's family and that justice will not be truly served until the current system of policing in the United States is reformed:

"A system that continues to lack basic accountability, that would allow for multiple officers to witness George Floyd in distress without any attempts to render him aid. Even with a guilty verdict, Derek Chauvin denied George Floyd the opportunity for justice when he decided to kneel on his neck for 9 minutes and 29 seconds. We call on all levels of governments that will quickly spend unlimited resources to protect property to think about why it’s so hard to spend those same resources to invest in neighborhoods and people that have been ignored and underinvested in for generations.

"This one verdict is not justice. If we truly want peace and calm, then we demand justice. We demand investment in our communities. We demand the freedom to be treated with dignity and respect. We will keep fighting this broken system until we get justice."

Cuyahoga County Councilwoman Shontel Brown, one of Turner's opponents for the Democratic nomination for Ohio's 11th district seat, tweeted that "there is still work to do."

We will never accept a system that fails to give our community justice.

My thoughts are with George Floyd's family. While nothing can replace the loss of a loved one, this is a step towards accountability for his murder. We must make sure that our systems always recognize that Black lives matter.

Black Lives Matter Cleveland tweeted out their immediate reaction, writing, "While this is one step towards justice this should be precedence for police accountability across the world."

While this is one step towards justice this should be precedence for police accountability across the world. pic.twitter.com/VBLFUNo6Id

Cleveland Metropolitan School District CEO Eric Gordon released the following statement to 3News Tuesday evening, calling this a time to come together to change the foundation of the country.

"Today’s verdict defines a profound moment in our country.  We must use this moment to critically examine the systems and structures in communities across this nation and in our own community in Cleveland, and challenge ourselves again to address the longstanding inequities that, together, form the public health crisis of racism and racial injustice."

"I add my voice to that of the United States Conference of Catholic Bishops chairmen of the Ad Hoc Committee Against Racism, and Domestic Justice and Human Development Committee who remind us that 'God is the source of all justice, love and mercy. The death of George Floyd highlighted and amplified the deep need to see the sacredness in all people, but especially those who have been historically oppressed. Whatever the stage of human life, it not only matters, it is sacred.' Mr. Floyd’s death highlights the urgent need for racial healing and reconciliation.

"I remain close in prayer with our African American community and those who serve with honor and distinction in the enforcement of our laws. I ask all people of goodwill to join with me in praying that God’s Holy Spirit turn our hearts toward working together to ensure justice and peace for all people."

This is a live story. Check back with 3News for more reactions as they come in.