This is the official place you can donate your money and know it will go directly to the family. 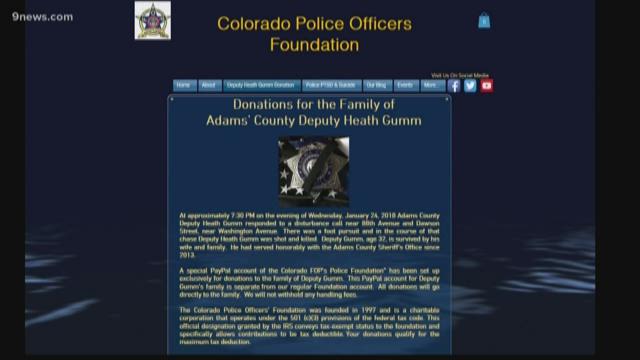 Just hours after Adams County deputy Heath Gumm was shot and killed in Thornton, those behind the scenes were working to help his family, financially.

The Colorado Police Officers Foundation set up a PayPal account on its website for the Gumm family after his untimely death on Wednesday.

It is one the official places you can donate your money and know it will go directly to the family.

"When these things happen and as tragic as they are -- we've already have two of them in a month -- you have to get it up and running very quickly because there are people out there who wait for the opportunity for any tragedy," said Frank Gale, executive director of the Colorado Police Officers Foundation. "Whether it be a law enforcement tragedy or another one, to get out on social media and create some kind of a site and then we don't know if they're legit."

Gale says they had the donation page up within hours of the incident.

He says he knows how crucial this support can be for the officer's family.

You can donate online or mail in a check. If you use a credit card to donate, there will be a small processing fee charged by PayPal.

As of Thursday afternoon, Gale says there were more than 600 donations -- raising more than $22,000.

After checking the background of the Adams County Sherriff’s Foundation, 9Wants to Know learned the charity wasn’t properly registered with the state, as required by law. In response, the Colorado Secretary of State’s Office said on Friday it’s sending a notice to the foundation it must properly register.

Charities that solicit funds from the public must be registered with the Secretary of States Office so the public can see if the charity is in good standing.

A review of the foundation’s latest finances reveals it raised $61,205 and spent $36,930 on a turkey giveaway for needy families during the Thanksgiving season in 2016. The documents show the charity is run by volunteers. 9Wants to Know did not find any questionable expenses in the records.

An Adams County spokesperson said 100 percent of the monies donated through the foundation to honor Deputy Heath Gumm will go to his family.

The Adams County Sherriff’s Foundation was established by Sheriff Michael McIntosh in 2016.

A county spokesperson showed us a receipt indicating the foundation paid for the necessary charity registration Friday afternoon.

Gumm's family has asked that in lieu of flowers, those wishing to show their sympathy make a donation to the Children's Hospital. Those donations can be made here.