They rise each morning, before the sun makes it's way over the Sangre de Cristo mountains, to run and train in a place now synonymous with running. 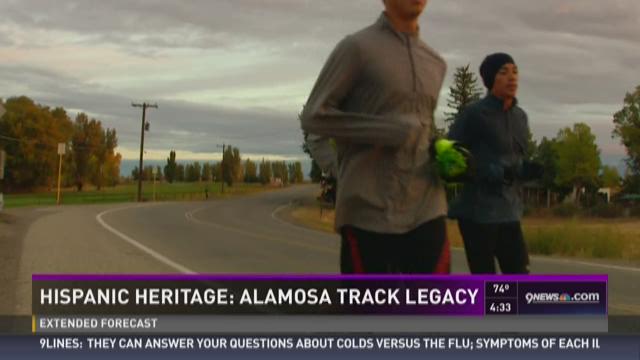 They rise each morning, before the sun makes it's way over the Sangre de Cristo mountains, to run and train in a place now synonymous with running.

But it wasn’t always that way. The story of this small town, which sits at 7,500 feet, is often defined by the man who used the altitude to train some of the best distance runners to ever live.

“He was a legend and he’s still a legend. He has a big legacy here,” said Timothy Rivera about his one-time high school biology teacher, distance coach Dr. Joe Vigil. “He’s a winner. He built a lot of character.”

The motto on Adams State University’s sign reads “Great Stories Begin Here,” and perhaps the school and town’s greatest story is that of Vigil, who was born in the San Luis Valley, grew up in Alamosa, went to the Navy and came back to eventually teach and coach at the college.

“Well, it was home. I had great people that helped me. And of course, there was the other side that didn't like minorities, but that was alright. I accepted it,” Vigil said about growing up in Alamosa. “In any culture, the minority is always subordinated, so I never used that as a stumbling block for me not to do something. I just had to work harder, study more, learn more than anybody else. That was the drive I had.”

“When I got hired, I got hired as asst line coach. But they told me I could start cross country. Well, I was also a full-time professor,” he explained. “Every time we would go to a meet, we’d get it on the chin. People were beating us and I was getting tired of getting beaten, so I started developing culture of running in the community. Little by little, after 30 years, that culture developed into a fountainhead of running in America.”

Just a few years after being hired, Vigil -- who admits he knew very little about the Olympics -- was tapped to help train American distance runners.

“They announced that the Mexico City Olympics were going to be in Mexico city -- same altitude as Alamosa,” he said. “We had the best middle-distance runners in America come to train at altitude -- Jim Ryan, Conrad Nightingale, John Mason.”

The 1968 Olympic marathon trials were held at the college, the finish line is memorialized right next to a statue of Vigil.

But folks will tell you that winning has never been Vigil’s priority.

In 2015, Vigil was honored as a "Legend Coach" by USA Track & Field -- only the second person ever to receive the honor.

He spends his days now in Arizona, but he still has the passion for coaching and training.

"We hardly ever mention winning or losing, but what did you learn about yourself?" he said. “That's what's important in life."