Hispanic Heritage Month: Remembering the impact of the Greeley Grays

More than 200 miles southwest of where the Greeley Grays played for more than 40 years, the mostly Latino baseball team is being featured in a historical exhibit at Adams State University. 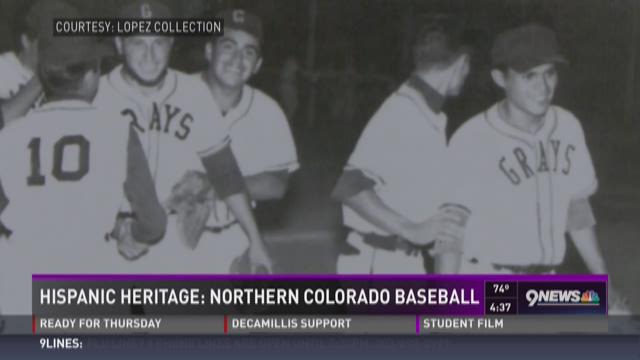 More than 200 miles southwest of where the Greeley Grays played for more than 40 years, the mostly Latino baseball team is being featured in a historical exhibit at Adams State University.

The exhibit, which is being housed on three floors of the Nielsen Library, features everything from old uniforms, gloves, baseballs and stories of the sugar beet farm workers who lived in "La Colonia," an adobe home community built by -- and for -- Latino and Hispanic farmworkers.

The exhibit is on display until Oct. 15. It was created by Gabe and Jody Lopez, who have written two books on the Grays and the community the players came from.

"The Colonia in Greeley was established in 1925. It was the second one that was built in Northern Colorado. First one was in Ft. Morgan," said Gabe Lopez. "Great Western Sugar Company built them. They provided the land and the material to build the adobe homes. And so they were taught how to build the bricks, and once they got all the bricks to build the homes, they started building them. I think, at that time, they had 40. By the time the colony was done, it ended up being about 65 homes."

The baseball team was formed in 1925, initially called Greeley Spanish Colony, until 1938, when the team changed their name to the Grays, inspired by the Negro League's Homestead Grays.

"They started playing baseball and the younger ones would learn from them, and then they got old and stopped and so the younger ones took over," Lopez said. "It became a community, the colony community. When there was a game, the whole colony would shut down and go watch the teams."

Lopez described "The 85 Corridor," featuring teams from Eaton, Brighton and more. Teams such as Hugo VFW, Wattenburg, Milliken Caballeros, and of course, the Greeley Grays.

"They were very dominant. They won quite a bit of their games from the beginning. A lot of the players would say when they beat the Grays, they won the World Series. It was very competitive," he said. "All those little colonias that were around there would play. But when the families and the colonias get together, they would surround the ballpark with cars and then, once they parked, the trunks would open up. Talk about aroma. You had every piece of food in there, and the kids would go catch foul balls, collect the foul balls, or if you wanted to go visit someone from Brighton, you’d go over there and sit and eat and visit. At the end of the game, the players would meet together and eat, so that brought the communities together."

Just four years after having items inducted into the National Baseball Hall of Fame in Cooperstown, New York, a curator from the Smithsonian Institution's National Museum of American History visited the Adams State exhibit to consider artifacts and stories for inclusion in a future exhibit as part of the museum's "Latinos and Baseball" project.

"The one thing we’ve been learning is Latinos have been involved in baseball from the very, very beginning," said curator Steve Velasquez. "This is a community history project. This is a Latino experience project. So, we’re looking at these old Latino communities across the country and we’re finding baseball teams. And so we’re using baseball as a lens to document these stories in Kansas City, in Syracuse, in Colorado, in Texas."

Velasquez said the goal is to eventually have a traveling exhibit that would feature not only Latino baseball history, but the stories of the communities the teams called home.

"It’s really more than just a community, it’s business, it’s economics, it’s politics, it’s religion. It’s looking at, like you said, their tio down the street and their father, they may be on two different teams, two different colonias, but they're coming together here," he said. "The stories that come out with this project are super meaningful, for not only the families, but for the block they lived on, for the school they played on -- it’s very American. It’s part of the American experience. It’s part of American history. It’s part of the American fabric.

For Gabe and Jody, they seem almost nonchalant, but appreciative, about their recognition from the Smithsonian.

"Jody and I are laid back. We get excited by little events like this and things like that, so when they called at first, we weren’t -- we didn’t know what to expect," Lopez said. "It was our friends that said, ‘Gabe and Jody, this is big! You gotta be excited!’ so then we started getting excited."