HOA tells one Loveland couple: You have too many pots in your yard

The couple isn't backing down - in fact, they've added a conspicuous sign to their yard warning potential homebuyers. 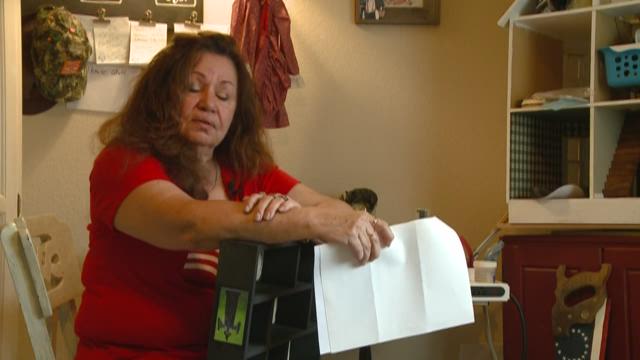 A Loveland homeowner's association and a retired couple living in the HOA community are going head-to-head over garden decorations.

The Alford Meadows Community Association sent a letter informing Colleen and Richard Stephens that their home's garden violated community rules. The couple's response was to double-down and add a unique lawn ornament in the form of a large sign.

The red and white sign states: "If you are considering purchasing a home in Alford Meadows, you may want to reconsider .... You could be the next target of the HOA!"

The Stephens' yard is well maintained. It has bright flowers, pruned bushes and green grass. It also has artwork which is how the dispute between the couple and HOA started.

The Alford Meadows Community Association says there are too many decorations and sent a letter stating some need to come down. If not, there would be consequences in the form of possible fines.

"It's ticking me off. I don't know what else to say. I don't feel we're in violation. We haven't done anything wrong," said Colleen.

Colleen and her husband decided to add one more piece to their yard. The sign has been sitting on their lawn for a few weeks.

"I'll do what's necessary to protect my rights," said Richard.

Before the violation letter was sent, someone with the homeowner's association totaled up the pots, planters and other items. They counted nine milk churns, 13 buckets and cans, patio furniture and a wooden flag handmade by Colleen.

The violation letter says the Stephens' can pick six items. The flag can't be one of them.

"I think HOAs are totally out of control today," said Richard.

The 64-year-old Marine Corps vet said he thinks they are being singled out.

"I just believe this is a personal vendetta because of my support for Donald Trump," he explained.

Richard said he had multiple political signs stolen from his yard during the presidential election. He also said they received a letter stating they were not welcome in Colorado.

Michael Krueger, the attorney for the Alford Meadows Community Association, sent journalists a statement on behalf of the HOA. It states the letter telling the Stephens' to remove the items is not politically motivated and that the couple just wants "special treatment" for their yard.

According to the original letter, the HOA said there have been complaints. But some residents stopped by the home to show support.

"Your yard is gorgeous," said one neighbor.

While there is some support for the decorations, not everyone is behind the large sign.

"Before I even put it up I apologized for my actions. I said, 'I know I'm going to offend some people but I feel I've been pushed to the next step.' I have had negative feedback asking me to take it down because it does affect their property values and the sale of their house. But the only thing I can say to them is, 'Go to the HOA. Address it with them.' This wouldn't happen if it weren't for the actions of the HOA," said Richard.

He said he'll take it down once the HOA rescinds the violations and writes a letter of apology.

The HOA's attorney told 9NEWS Monday afternoon that the board is not interested in pursuing fines for the decoration violations. However, the association is looking into filing a lawsuit to get a court order for the Stephens' to remove the large sign from their yard.