The Black Leaders Collective said the current list is racist and full of inequities. 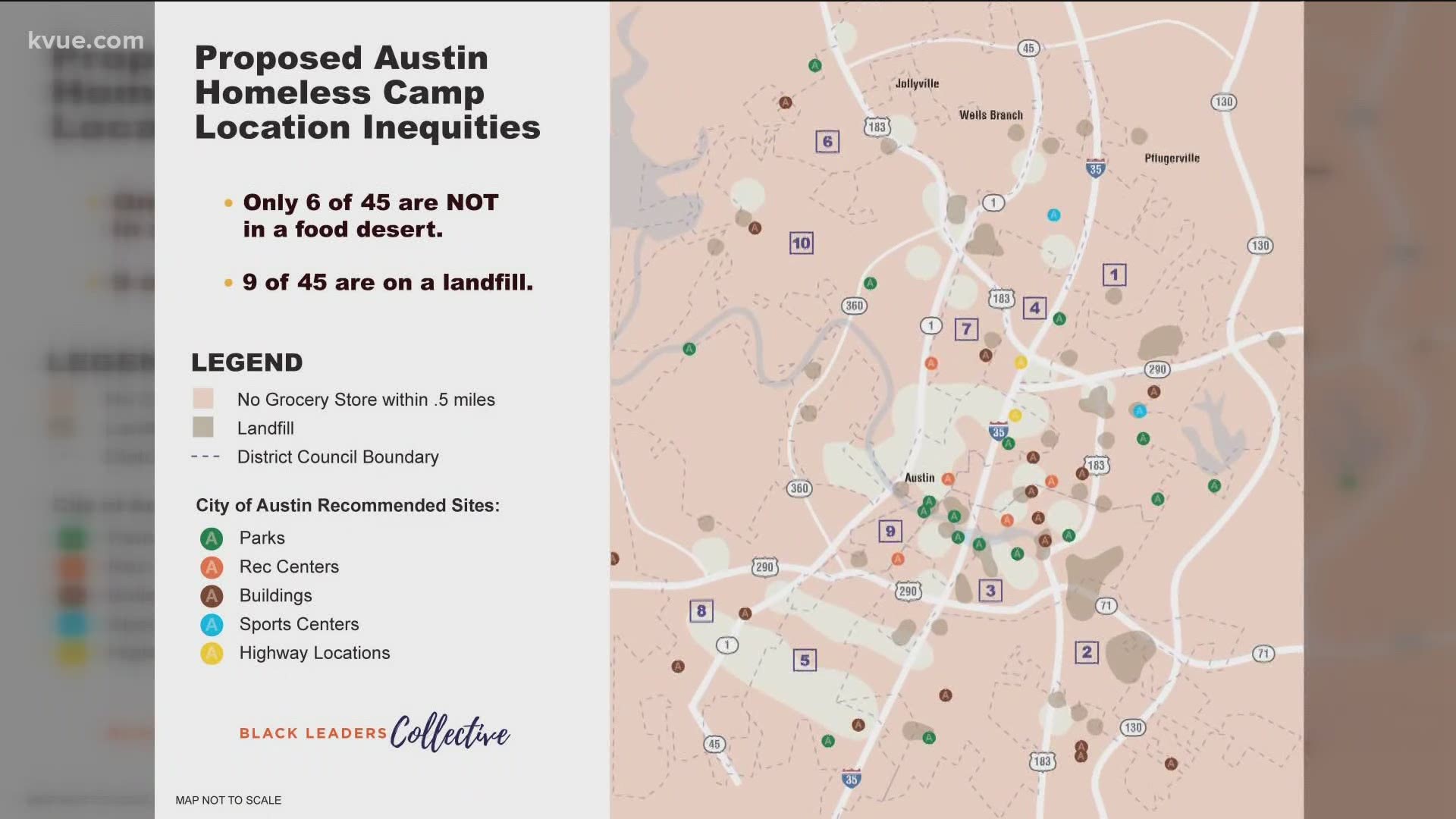 AUSTIN, Texas — From housing to land development and now deciding where to put homeless camps, Black leaders in the Austin area said they've had enough of what they call the City's decades-long racist policies.

The Black Leaders Collective is a group coming together to send one message to the City of Austin: redraw the map of 45 proposed homeless campsites and include the community in the process.

One member, Barbara Scott, is the president of the Colony Park Neighborhood Association. She said her neighborhood needs a grocery store.

She has also been fighting for a health care facility and other resources for years.

Instead, what the East Austin neighborhood may get sooner is a homeless camp near the Colony Park District Park, which was completed just last year.

But that has neighbors confused. Scott and others said the only available land for a homeless camp is 208 acres that have already been designated for the Colony Park Sustainable Community project.

"I think it was absolutely unconscionable," Scott said.

On Monday, Scott joined other Black leaders in the Austin area to call on the City to come up with a new proposal for homeless camps. They pointed out most of the proposed locations are on the east side, where six of the 45 are not in food deserts and nine of the 45 are on landfills.

"Ever since the 1928 master plan, this city has been sweeping all of its unwanted people and things to the east side of I-35. All the Black schools and libraries and pools were put over here to keep us over here. Then came the landfills, the power plants, the tank farms. The disinvestment and lack of opportunities and concentration of poverty have led to massive equity gaps. And we're still struggling to close those today," Harper-Madison said.

Reverend Daryl Horton, the president of the Baptist Ministers Union of Austin, said the faith community is concerned for the homeless.

He said he is concerned when the City starts to draw maps, citing more COVID-19 testing sites on the west side of town than the east as an example of disparity. He also pointed out the proposed sites are too far from where the homeless can get help.

The Black Leaders Collective said even coming up with this preliminary list is an issue because of the optics. That's why they want the City to come up with a new list, this time with community input.

The list of proposed campsites is only preliminary. The city council is expected to meet next week to talk about the next step for choosing locations.

WATCH: Groups pushing to boost funding for housing for the homeless

Texans could carry handguns without a permit under bill headed to Gov. Greg Abbott's desk