'I'm so sorry for this tragedy:' Developer speaks after Emerson fire

Denver Fire says it could be weeks if not months before they get an answer about how the fire started, which also means they haven't said if the fire is accidental or not. 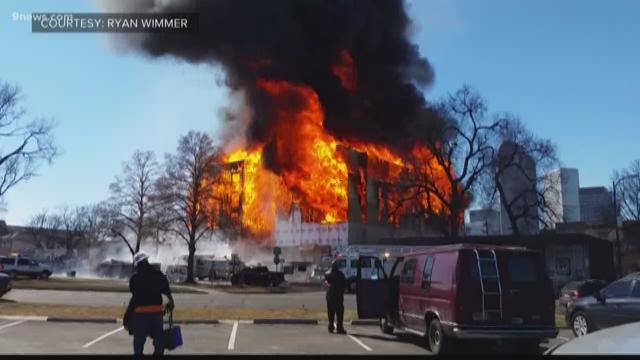 Denver's mayor will recognize firefighters on Friday for their actions during the massive fire on Emerson and 18th Avenue last Wednesday.

Two people died in the fire that destroyed a construction site, damaged over a dozen nearby buildings and torched upwards of 40 cars. Six people were injured - including a firefighter who was burned.

Over 100 members of the Denver Fire Department responded to the construction site of what was to be the Emerson Place apartments.

The developers of the site, Allante Properties, spoke to 9NEWS for the first time They're a small company owned by a father and son from Colorado.

Daren Schmidt, one of the owners, said he's still waiting for answers about what happened, but still feels a sense of responsibility and wants to apologize to the community and the victims.

"It's tough to know two people lost their lives," he said. "It hit really hard to know they have families. They show up to work to do a job and make money. And everyone on the project was doing a great. And have something like this happen and not be able to go home and see your wife.

Something like this happened it's just absolutely awful. There's so many things that I've through in my brain what could we have done differently?"

Below is a transcription of 9NEWS' Anusha Roy's interview with Schmidt - you can always watch it in the video above:

9NEWS: Is there any sense of responsibility?

Schmidt: I absolutely take responsibility in that I want to do everything I can do help these families and give our condolences to the families and the loss of life. There was also six people who were injured as well. A horrific experience for a person to literally have to jump out of the building.

Schmidt: Safety is literally the number one concern in every meeting we have. On a day to day basis from what I know, what the contractor does, we're not the contractor, we are the developers but they have safety debriefings. Just walking around the site there are fire extinguishers everywhere and no smoking signs everywhere. I just can't sit still and know that there's not some future action to be taken.

9NEWS: If you could, what would you say to [the victims]?

Schmidt: I'm so sorry for this tragedy. And knowing I didn't have anything to do with it but that we clearly were there building a building, it was a very difficult thing to stomach to know all these people had been displaced because of a horrific tragedy and accident.

Schmidt added to 9NEWS that he can't comment on the investigation.

Denver Fire says it could be weeks if not months before they get an answer about how the fire started, which also means they haven't said if the fire is accidental or not.

Coincidentally, it turns out before tearing down the old apartment building to make way for Emerson Place, Denver Fire did a small scale training there before construction started.