It's perhaps the spookiest and most hidden place at East High School. 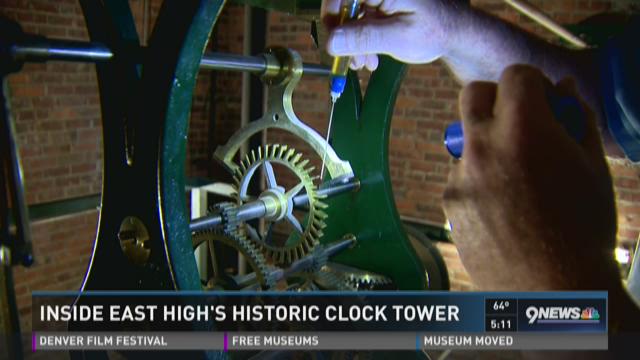 DENVER - It's perhaps the spookiest and most hidden place at East High School.

Above the spiral staircase, in a tower more than 100 feet in the air, is a rare look at where the school's heart beats.

"It's one of those things not too many people get to experience," says Mike Corn, a former clock repair teacher with the Emily Griffith Technical College.

Twice a year, he and other teachers, students and enthusiasts make their way to a dusty dark room that holds one of Denver's historic landmarks: East High's clock tower.

In addition to giving students real time experience, Corn, along with other mechanics, adjust the clock one hour for Daylight Saving Time and fix any problems that have come up since the last repair.

"It's just a fun activity," Corn said. "It's interesting to be a part of history."

The process takes a few hours. Crews have to do things like, guage how the clock moves on the outside and go through each and every gear in case it needs to be oiled.

The effort is not just for Daylight Saving Time, it's a teaching opportunity for experts like Corn.

"I've looked at this clock tower from literally all angles and always wondered who fixes it. Now I know!" Dolan said.

The work is intricate and complicated. Every part has it's place and small mistake could change everything.

Plus, there are four faces on the clock tower which means repairs need to be even more detailed.

Over the years, mechanical clocks have become expensive to maintain. Average costs for repairs range in the thousands.

Corn says it's not generating a lot of future interest.

"There used to be a lot of clockmakers around," Corn said. "Now there's only a few."

Corn says the craft of clockwork is kind of lost, evidenced by the low number of "young people" in clock repair classes.

Experts say it's an unfortunate shift as the times change, adding that there's a beauty to clockwork that they want people to experience.

Saturday, the four faces of East High's clock tower showed different times ranging from a few minutes to 15 minutes. There are a multitude of reasons behind why that happens, according to experts.

For example, magnetic fields could impact timing or bugs could get in the gears.

However, after taking a closer look at the clock's inner workings, all the mechanics say today's issue is simply unexplained.

They say that is pretty rare but happens occasionally.