In her two seven-year-old boys, Lynette Rios of Albuquerque has found her purpose. 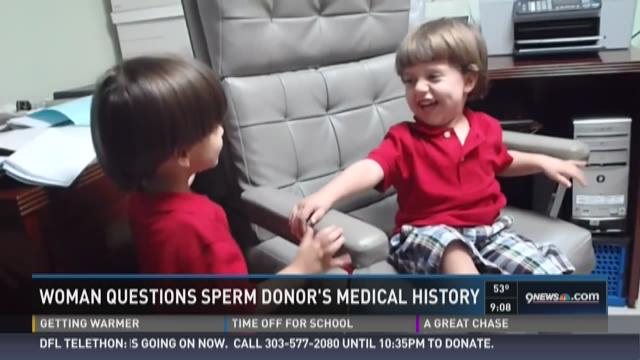 In her two seven-year-old boys, Lynette Rios of Albuquerque has found her purpose.

The road here wasn't easy. When Lynette turned 31, she had a successful career, but no one to build a family with.

"I did what was under my control. I became a mother on my own."

Her search led her to donor 11349 –a Hispanic man with wavy hair and a love of basketball–sold by California Cryobank.

We looked into ourselves, and found that you can choose from hundreds of donors by hair color, eye color and ethnicity. Find your ideal man, and for $740 or more, he's yours.

"I looked at the baby picture as well and I thought he was adorable," she said.

About a year of treatment, and tens of thousands of dollars later, Lynette was pregnant with Jayden and Fabian.

"My kids are my life. they are my biggest dream come true," she said.

The reality of conceiving with an anonymous donor hit her when she learned the boys were speech delayed.

When they turned six, Jayden was diagnosed with cancer.

"All of these doctors, including the pediatrician, would ask me about their genes, about their family history," she said.

The information Lynnette did have was limited. A medical history questionnaire with was virtually blank. The donor claimed neither he, nor any of his close family, suffered anything on this long list of illnesses. Even to the question "any other condition not listed above" he said "no."

"I again reached out to California Cryobank, like I did when my kids were three years old, to ask questions but I still don't know."

"There's not very much regulation at all," said Wendy Kramer of Nederland.

Kramer founded the Donor Sibling Registry –a webpage dedicated to connecting donor children o their siblings using a donor number. She is also asking the FDA to update the regulations. She'd like to see mandatory genetic testing, and an end to anonymous donation to protect parents who don't always think about the consequences of sperm donation.

"There's no way because of HiIPPA law to verify actual medical records –we can't get a hold of medical records for their families," said Scott Brown, a spokesman for the company.

What's more –the donor recipients can't contact the donors. That's only available to donor children when they turn 18.

"There's no outlet for us to reach out to the donor on your behalf, you don't get to meet the donor," he said.

"That's extremely frustrating," Lynnette said. "They have a huge blockade of information and I can't get past it."

California Cryobank said they do extensive interviews with donors, and only accept about one percent of applicants.

Each donor makes between $100 and $120 for every donation and that can add up for those who donate for years.

Lynnette spends her time shuttling her son to chemotherapy treatments, and wondering about the future.

"What will be next? What else can I expect?" she said.

Lynette Rios with her sons, Jayden and Fabian