Cummings K-8 Optional School will be back in session Friday morning after the shooting at the Memphis school Thursday morning. 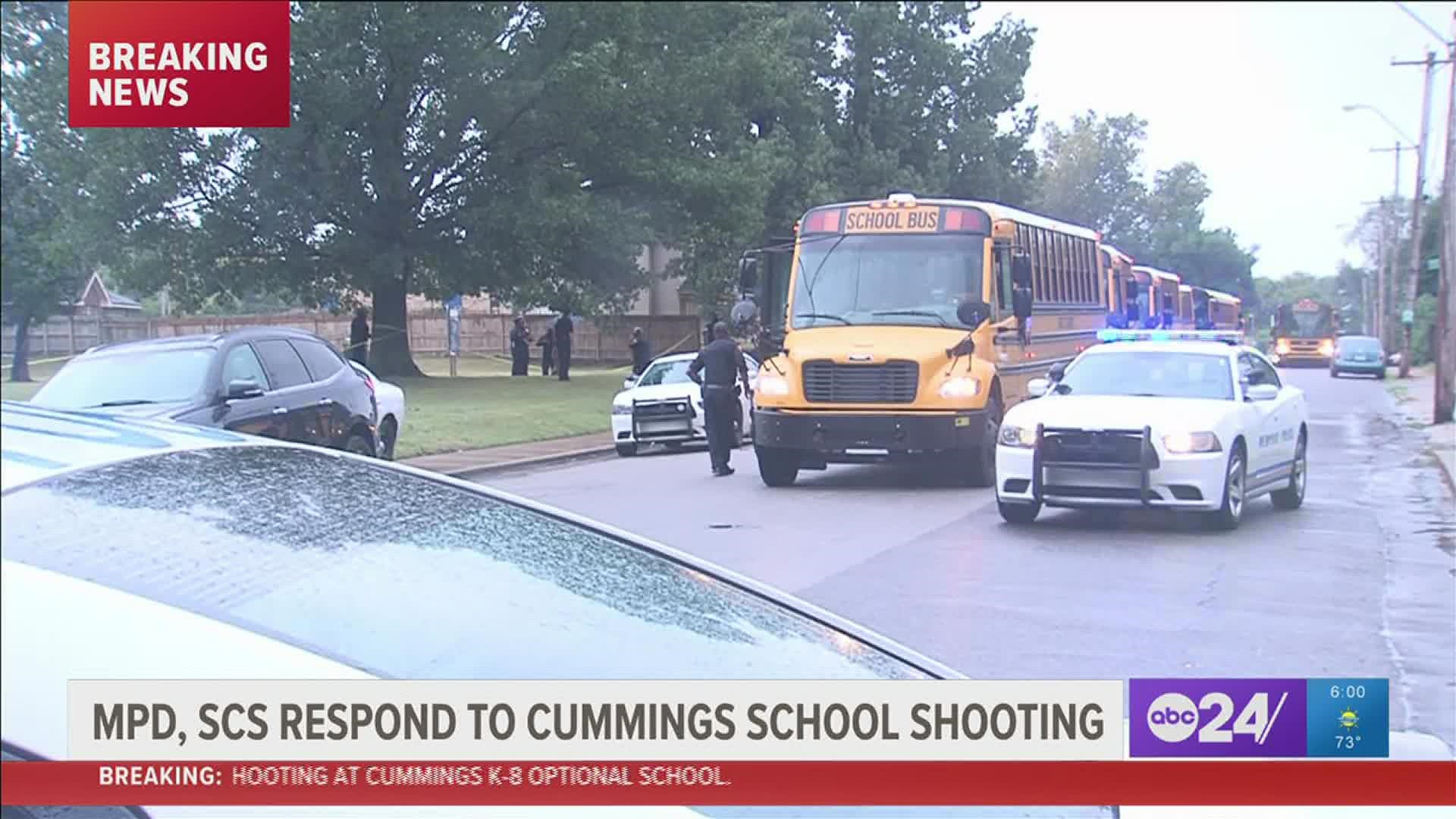 MEMPHIS, Tenn. — Cummings K-8 Optional School will be back in session Friday morning after a shooting at the Memphis school Thursday morning.

Students who were in class at the time were quickly moved to safety. They were bussed a few blocks away to Metropolitan Baptist Church in south Memphis to wait for family members to pick them up.

"My baby, my baby," said grandparent Genora Tucker, whose grandchildren were the first students to be released at the church.

"I’m very happy to have my grand babies. I wished for the safety for all the children. I’m sorry this even happened. It’s just the type of world we live in and I pray for everyone," she said.

As Tucker left, the stairs outside the church were full of anxious parents in line and waiting in the rain to get their children.

"As a parent very irritated and frustrated. They’ve have us going back and forth to the front. They are telling us one thing and then five minutes later telling us something else," said Tiara Sommeral. "We've been standing out here for an hour now and none of us have gotten our kids. We don’t know what’s going on."

Our School Board stood on the frontlines today as we wrapped our arms around the Cummings principal, teachers, staff, children and families. I’m also appreciative for the support from U.S. Senator @BillHagertyTN, Commissioners Lowery, Milton and many other community leaders. pic.twitter.com/Q1uSdmV7GU

"I’m not pointing fingers 'cause there is enough blame to go around, but this could have been avoided. If you see something, say something. If you know something, tell someone," said SCS Superintendent Dr. Joris Ray.

Ray and school board members rushed to the church to assess the situation. They were concerned about the students - about the toll this will take on them emotionally.

"That’s what we have to work on now. The children who were not physically injured having to deal with this. They will be cared for - the social and emotional support they need," said SCS Board President Michelle MCKissack.

McKissack added while it may have seemed chaotic to parents, and it was - but their district's safety plan worked. The emergency plan for Cummings K-8 Optional is to bus the children to Metropolitan Baptist Church to get them out of harm's way, and that is what happened in this case.

It was also stated at a Ray's news conference outside the church that the district had just held an active shooter training earlier this month, and the Cummings staff and administration were prepared to handle this situation.

PHOTOS: Student shot, another in custody, after shooting at Cummings K-8 Optional School

1 / 11
AP
Police respond to the scene of a shooting on Thursday, Sept. 30, 2021 in Memphis, Tenn. Authorities say a boy was shot and wounded at a school. Memphis Police said in a statement that the shooting was reported Thursday morning at Cummings School, which includes grades kindergarten through eighth. (AP Photo/Adrian Sainz)