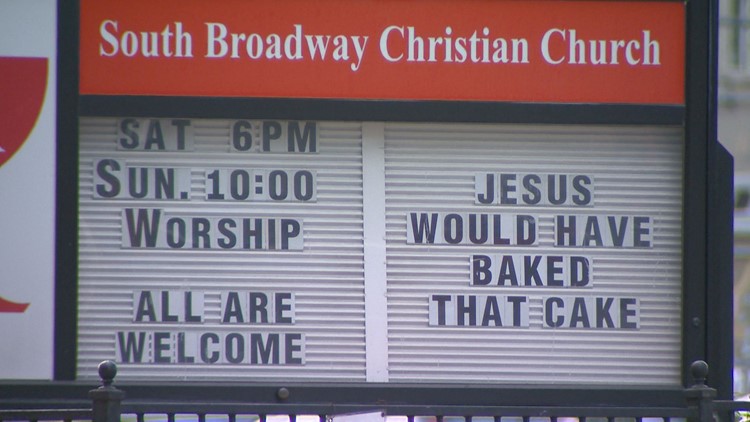 Photo by: KUSA
The sign outside of South Broadway Christian Church.

‘Jesus would have baked that cake:’ Pastor explains why he posted sign

KUSA – A Denver church is weighing in on a Supreme Court decision in favor of a Lakewood baker who refused to sell a wedding cake to a gay couple.

A sign outside of the South Broadway Christian Church at East Ellsworth Avenue and Lincoln Street reads “Jesus would have baked that cake.” The pastor who posted the sign, Dustin Adkins, said the message deals with inclusion.

RELATED | Baker at center of Supreme Court case: 'I don't create cakes for every occasion'

“Jesus worked with folks on the periphery of society, mistreated and marginalized,” Adkins said. “Those folks are the ones he welcomes the most.”

Baker Jack Phillips said he believes marriage is between a man and a woman, and has refused to bake cakes for occasions other than weddings.

"I don't create cakes for Halloween," Phillips said. "I wouldn't create a cake that was anti-American or that would be disparaging against anybody for any reason, even cakes that would disparage people who identify as LGBT. Just cakes have a message and this is one I can't create."

The Supreme Court’s ruling in the Masterpiece Cakeshop case does not deal with David Mullins and Charlie Craig, the gay couple who tried to buy a cake for their wedding, but rather the Colorado Civil Rights Commission, which they say infringed on Philips’ religious rights.

The court narrowly ruled in favor of Phillips, which basically means the justices punted on the bigger issue of whether state civil rights laws require bakers and other wedding vendors to serve gay couples.

Masterpiece Cakeshop reopened on Thursday – three days after it closed its doors.