The plaintiffs are seeking a temporary restraining order against the use of the devices. 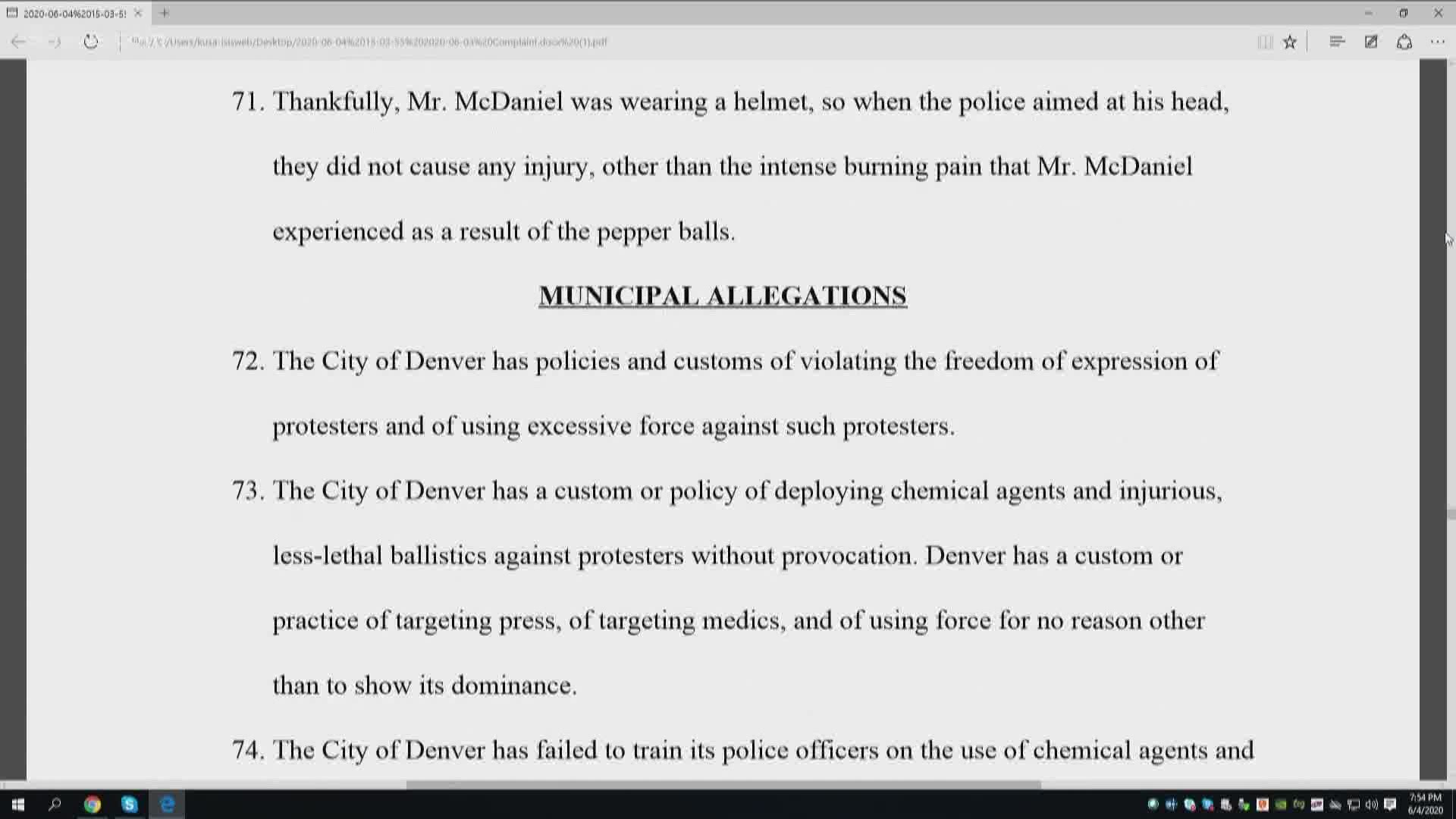 DENVER — A complaint has been filed against the City of Denver that alleges officers with the Denver Police Department (DPD) have misused less-lethal weapons and seeks a temporary ban on the use of the devices.

The document alleges that instead of maintaining peace and public safety, officers are using force against peaceful protesters.

“I decided to bring this suit when I was approached by a few people who had been assaulted and told me they had not provoked the cops while protesting," Attorney Milo Schwab said during a news conference on Friday afternoon.

The class action complaint filed Thursday in Denver District Court says DPD cannot be trusted with the use of less-lethal weapons against protesters, and that its officers use them without regard to the constitutional rights of protesters and bystanders.

The document says officers have targeted journalists, ordinary citizens and medics with their use of less-lethal weapons. It lists several examples of times when officers allegedly misused the devices and provides videos of recent incidents during the George Floyd protests as evidence. 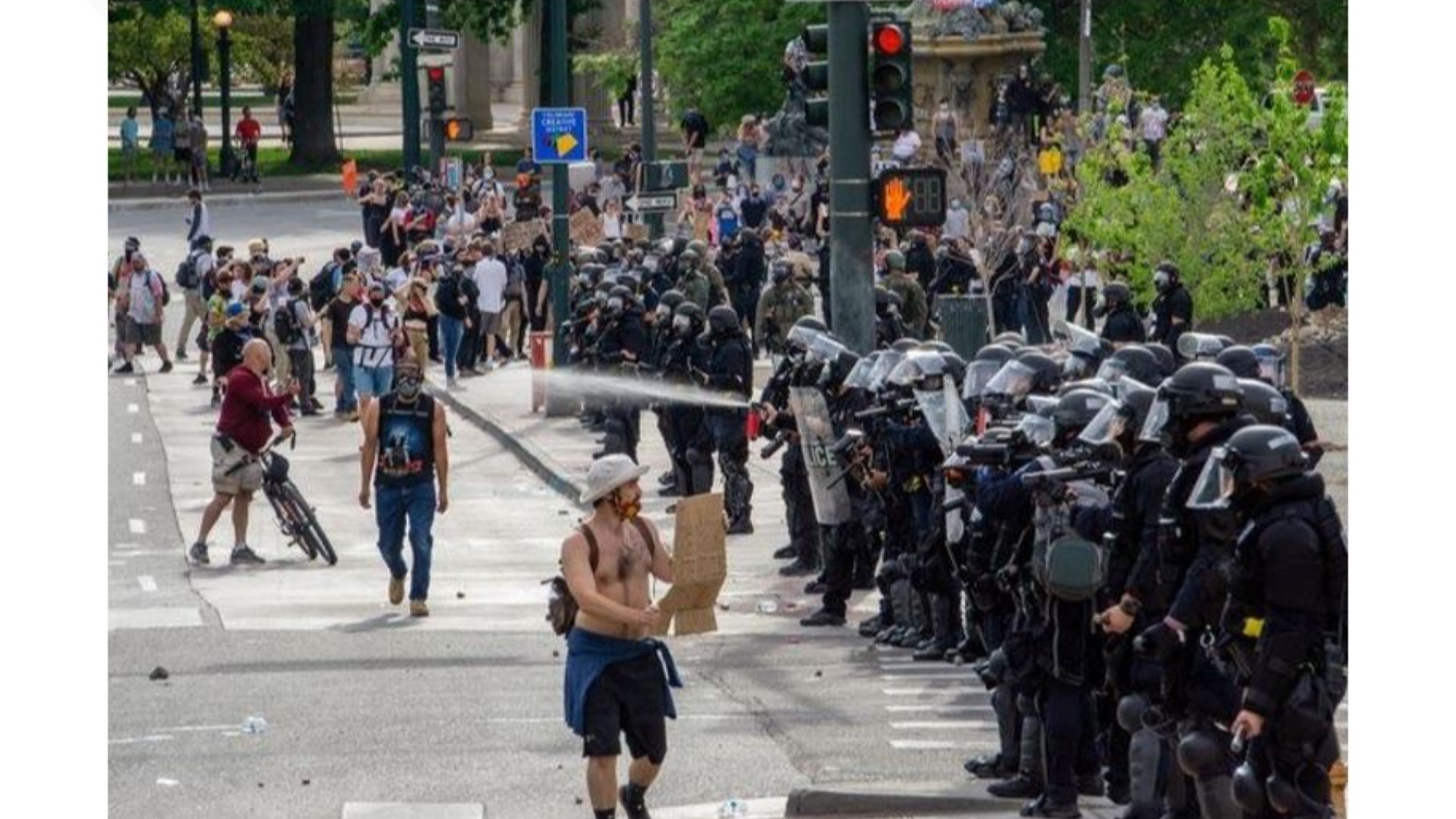 In one case, the document says a newspaper photographer was hit by two pepper balls, cutting his arm and shattering his press credential. In another instance, according to the lawsuit, a television reporter claimed a station photographer was hit four times by "paint balls" fired by DPD officers.

Credit: Attorney Edward Milo Schwab
An image of a camera lens allegedly broken by police, used as evidence in a complaint filed against the City of Denver.

Other journalists, the lawsuit says, claimed they were exposed to tear gas due to the deliberate actions of officers.

The complaint also includes claims that officers targeted medics who were trying to provide treatment to people injured by the police's "wanton use of force," and says they aimed their weapons at people's heads and groins in order to "inflict maximum damage, pain and distress to their target."

The complaint lists several people who it says were hit in the eye by rubber bullets, claiming officers were not properly trained on the use of such devices. It also claims police used tear gas, pepper balls and flashbangs on peaceful crowds.

One video shows officers shooting pepper balls at a car with a pregnant woman inside.

The complaint says it blames a failure by DPD to train and supervise its officers and issue corrective instructions after violations were brought to light.

The plaintiffs are seeking a temporary restraining order barring DPD officers from the use of tear gas, rubber bullets, pepper balls, pepper spray and flashbangs, as well as damages compensating them for their injuries. They also want a declaration that officers' conduct violated the first and fourth amendments of the U.S. Constitution, as well as an injunction barring them from engaging in such conduct.

Four plaintiffs are named in the lawsuit, each claiming they were the victims of misused less-lethal weapons. The lawsuit was also filed on behalf of "other similarly situated individuals."

Those four plaintiffs all described their experiences during Friday's news conference.

"I got gassed several times, and at one point I couldn't open my eyes for 10-15 minutes," Agazi Abay said.

He said he marched for multiple nights, and he noticed something different about the last two.

“The last two nights were the calmest nights I’ve seen," Abay said. "It really makes you wonder if the agitators are law enforcement or protesters.”