Officers were wearing riot gear and used pepper spray and gas, according to a department spokesperson. Their response has been heavily criticized. 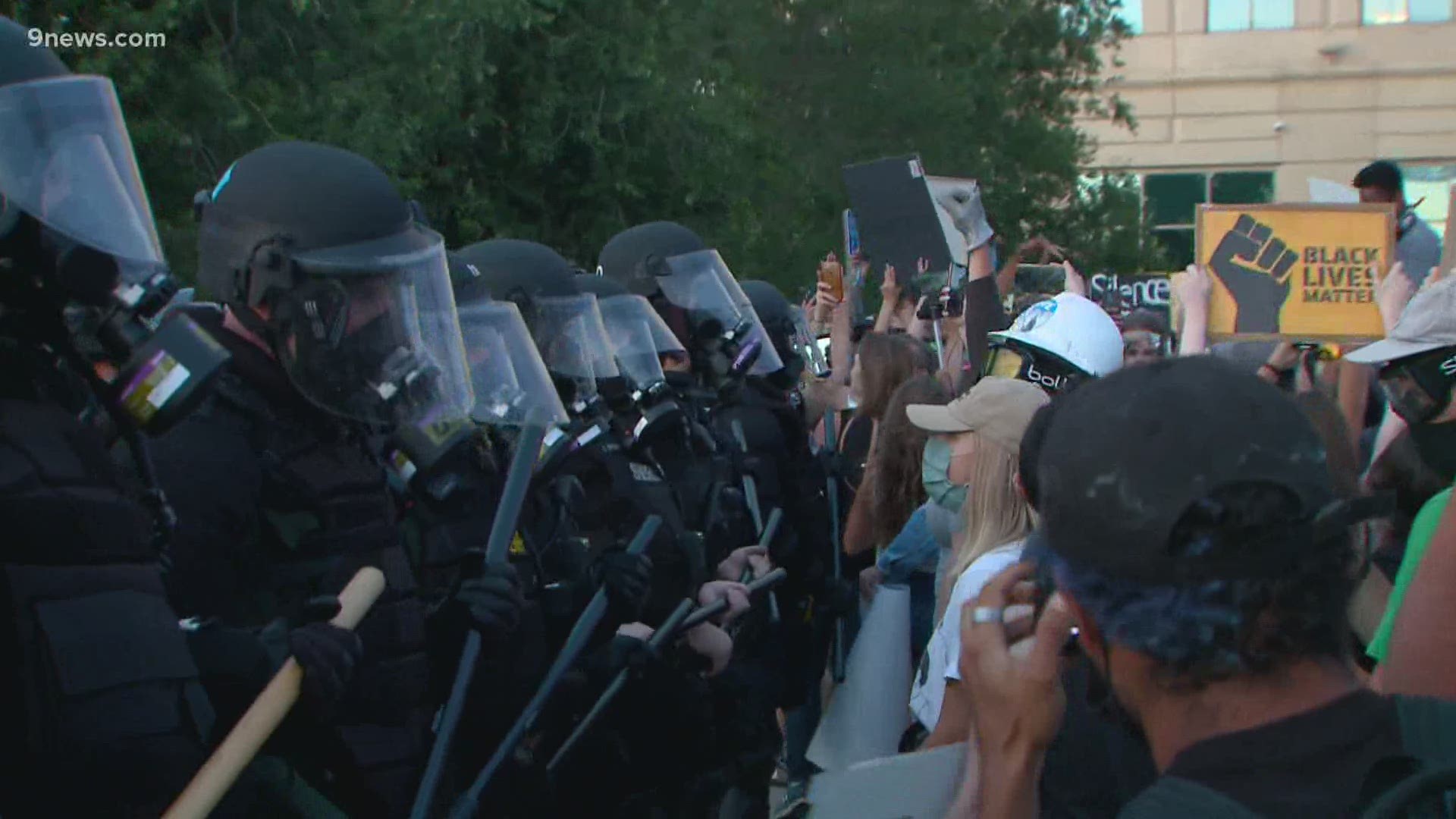 AURORA, Colo — Aurora Mayor Mike Coffman is calling a special meeting of the Aurora City Council on Tuesday to address the Aurora Police Department's (APD) response during protests on Saturday over the death of Elijah McClain.

A release about the meeting said that council will be hearing from and asking questions of APD about their tactics which included arresting two protestors and using pepper spray.

“We are hearing many questions and concerns from the community about the tactics used by the Aurora Police Department during Saturday’s protests, and council needs to hear first-hand specifically what happened,” Coffman said in the release. “The tragic death of Elijah McClain brought out many peaceful people over the weekend who want their voices heard, and unfortunately there were disruptions that overshadowed the broader message. I look forward to working with City Council to understand more and make sure we are upfront and transparent with our residents.”

The crowd first gathered outside the Aurora Municipal center Saturday afternoon for a violin vigil.

Just before 3 p.m., thousands of participants marched west on East Alameda Parkway and onto Interstate 225.

Aurora police called the demonstration "an unlawful assembly" when some protesters pushed down a fence.

The department said some demonstrators threw things at them or refused an order to move.

An APD spokesperson said after that order was given, some officers used pepper spray and/or smoke to try and encourage protesters to move.

In an interview with 9NEWS, interim APD Chief Vanessa Wilson said protesters pelting her officers with rocks along a fence that had been torn down was when the department made the call that the situation was unsafe.

She also said that her officers were trying to protect protesters who were listening to a violin vigil on the lawn.

However, many people have spoken out against that response, including State Representative Leslie Herod who sponsored the new police accountability bill that just became Colorado law.

"A law is only as good as the people elected to implement it," she said.

"I hope Aurora PD and either this chief or, or whoever the ultimate chief is – looks into these sorts of things," Denise Maes, the public policy director of the organization said. "I mean this is precisely why there is a big conversation about defunding police because that was not the appropriate response to bring about public safety. So there's many other things that we can do that guarantee public safety and coming out in full riot gear is not one of them."

Aurora city councilman Juan Marcano, an advocate for police reform, attended the protests to observe. Marcano said he had been briefed with the rest of the council before the protests that officers intended to remain relatively hidden unless protestors began destroying property.

“It was just really surreal to see basically a pop-up orchestra concert get displaced by a line of riot cops,” Marcano said. “It’s not something I want to see in my city.” 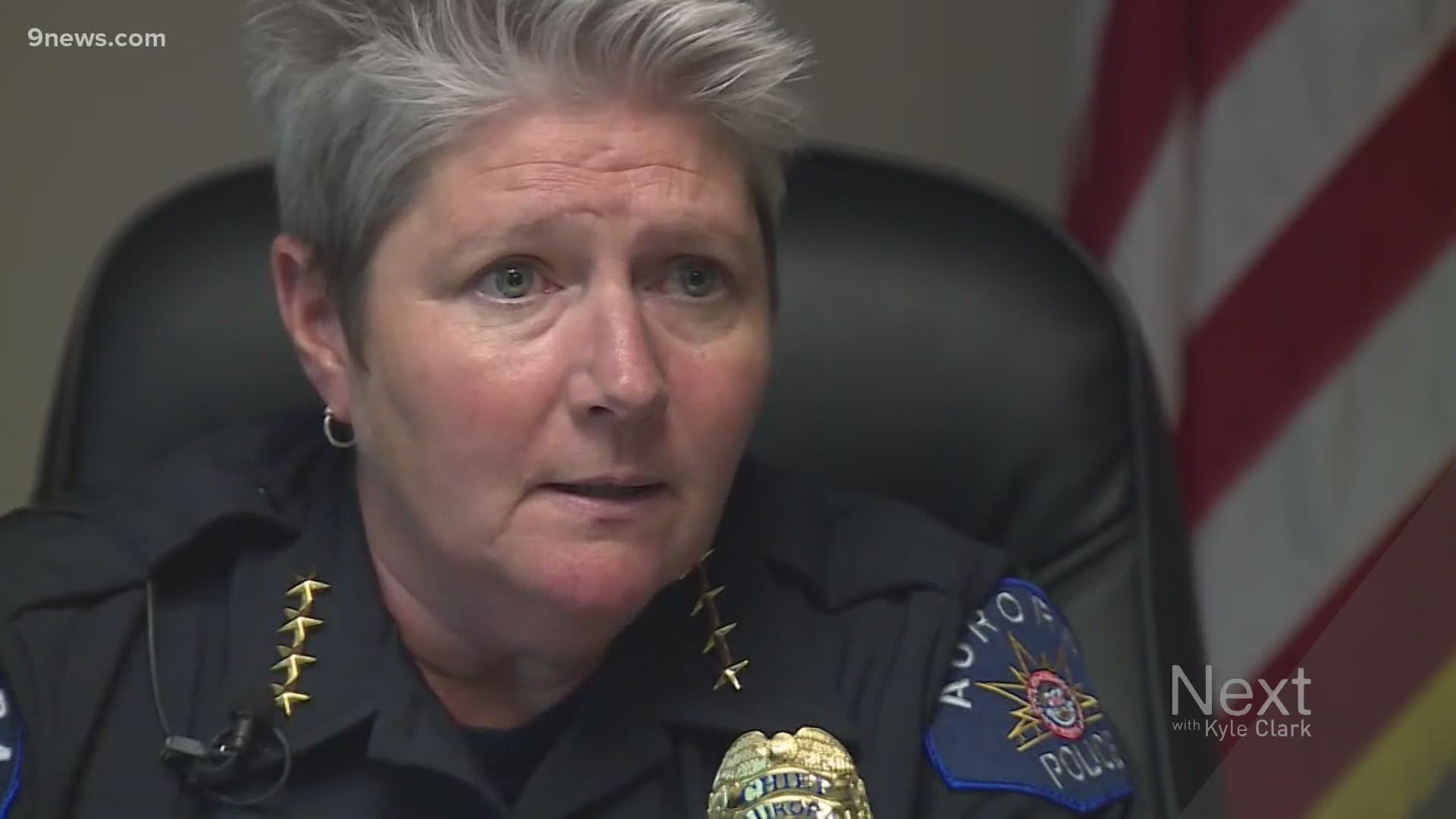 Marcano had been along the line for much of the day on Saturday, he said, and he did observe a handful of agitators trying to provoke officers. He said the peaceful crowd discouraged those agitators.

Later in the evening, he moved to the lawn to watch a violin vigil for McClain.

“They had shifted into Canon in D,” he said. “I played viola growing up and that was a really challenging piece. That used to be my memory of Canon in D, but now it’s going to be watching riot police come out from between our museum and city hall and start to push people off of the lawn.”

Marcano is pushing to see body camera video and surveillance video to better understand what provoked the response.

Coffman has not responded to 9NEWS questions and canceled a scheduled interview on Monday. He did issue a statement on Twitter: