President Biden toured NREL in Golden and then touted his plan to create jobs while tackling the climate crisis. 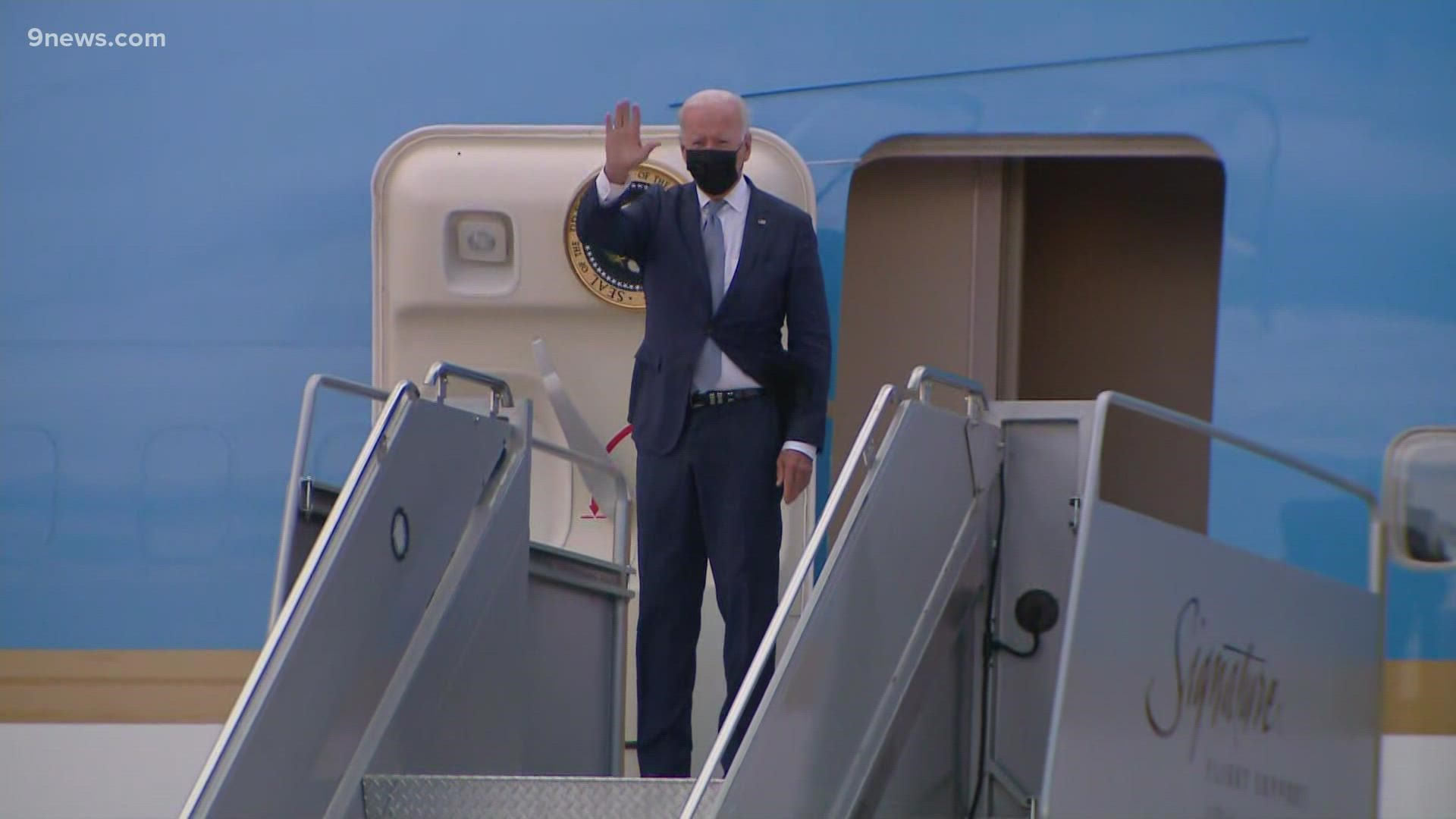 DENVER — President Joe Biden made his first presidential visit to Colorado on Tuesday where he visited the National Renewable Energy Lab (NREL) in Golden and then touted his plan to tackle climate change while putting Americans to work.

Biden landed at Denver International Airport (DIA) at about 1:10 p.m., and traveled to Golden where he toured NREL before delivering an address. The president spoke from a field with solar panels visible behind him as noted that it's a critical time for the country in the fight against climate change and a clean energy future.

"Extreme weather that we're seeing is only going to come more frequently and with more ferocity," the president said. "We're blinking code red as a nation."

Biden pointed to recent events such as the historic fires in the west and Hurricane Ida which first devastated Louisiana and then hit New York hard with severe flooding.

"Communities that nearly one in three Americans call home have been struck by weather disasters in just the past few months," he said, before noting that extreme weather disasters cost the country $99 billion last year.

Biden then touted how investments in his Bipartisan Infrastructure Deal and Build Back Better Agenda will help tackle the climate crisis, modernize our infrastructure and strengthen our country’s resilience while creating good-paying, union jobs and advancing environmental justice."

"We need to make the investments that are going to slow our contributions to climate change today. Not tomorrow," he said. "And here's the good news. Something that is caused by humans can be solved by humans."

He's set a goal for the U.S. to reduce greenhouse emissions by 50 to 52% by 2030 and reach a goal of half of the new cars sold being electric instead of gas-powered by that same year. He said that the technologies are ready, but work is needed to scale them up and that process will create jobs and save money down the line.

"Every dollar we invest to floodproof a power station, install power lines underground, winterize a power plant or to build advanced turbines... every dollar we spend saves $6 down the road because the next time a disaster strikes the flooding is contained. The fire doesn't spread as widely. The power stays on."

He said the best way to reach the goals is to invest and innovate in things like a modern electric grid, new transportation options such as electric busses, and adding charging stations. Biden estimated the bipartisan infrastructure bill would put 800,000 Americans to work to modernize roads and broadband infrastructure among others.

"But folks, we need to pick up the pace," Biden said. "We don't have the time now. The necessity is there. We don't have a lot of time, we don't have much more than 10 years."

After his Tuesday afternoon remarks in Golden, Biden departed from DIA around 4:30 p.m. to return to the White House.

The president's Western trip began Monday with stops in Idaho and California.

In Boise, Idaho on Monday, the president met with smokejumpers, talked wildfire prevention with Idaho officials, and took a tour of the National Interagency Fire Center. The president then traveled to Sacramento, California, where he is surveying damage from the Caldor Fire.